Student activists talked about their connection to the Holocaust at a booth in the Student Learning Centre on Thursday, as part of Ryerson’s first Holocaust Education Week.

Geoffrey Handelman is president of Hillel Ryerson and a facilitator of the events. He said organizing with the RSU’s support allowed them to reshape what Holocaust Education Week means for the university.

“Anybody can connect to the Holocaust in a lot of ways. Not only Jews perished,” but also people from marginalized communities, said Handelman. “There is a person for everyone to connect to [from the Holocaust].”

Aedan O’Connor, a Ryerson alumni, said that while advocating for Holocaust Education Week last spring, she encountered anti-Semitism from some people who were opposed to having the week. She said it’s important for students “to learn about modern forms of anti-Semitism and…anti-Semitism from all fronts should be rejected.”

Now that Ryerson’s first Holocaust Education Week has begun, O’Connor’s message to Ryerson students is to “go, learn and be open.”

The RSU’s vice-president student life & events, Lauren Emberson, said that she is tired of students who think, “[anti-Semitism], racism, sexism and homophobia doesn’t exist.” According to her, “anti-Semitism still exists on campus, so it’s amazing to have people here who are dedicated to fighting that and raising awareness.” 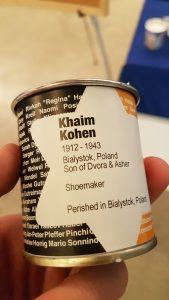 Emberson said that she chose to help run the event because, “the RSU is here to represent students, which includes Jewish students and students who were affected by the Holocaust.”

Jeremy Galper, the education chair of Hillel Ryerson, picked up one of the many candles on display, each representing someone who died in the Holocaust, and explained its meaning.

He said, “This is Khaim Kohen. He’s someone who died in the Holocaust in one of the concentration camps.” On the side of the candle, it describes parts of Khaim’s life: his parents’ names, his occupation, where and when he died. “It shows a little bit about him so you can get on a personal level with him,” said Galper.

Attendees were encouraged to take a candle home and light it in memory of the person who died.

As part of the event, participants wrote down who they were remembering from the Holocaust on a sign and attached their picture with it to a bulletin board. Amir Javadi, a non-Jewish student who attended the event, wrote: “Six million people have lost their lives.” He said, “Jewish or non-Jewish, the fact that we are all human should unite us.” 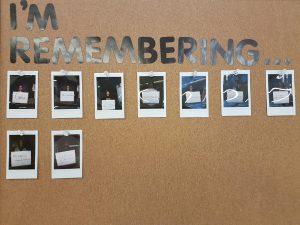