Jeff Perera is a workshop facilitator for White Ribbon Campaign, and the founder of the organization’s Ryerson chapter. Walk a Mile in Her Shoes was their biggest fundraiser of the year.

The Eyeopener: What is the Walk a Mile in Her Shoes campaign and what is its purpose?

Jeff: The idea is engaging men in the conversations about the realities of women and violence against women in our world. It’s a tricky subject. It’s a taboo conversation…So the idea is to literally get men to walk a mile in high heels. And it’s not to say that all women wear high heels, or that putting on a pair of high heels will tell you what the experience is like for women everyday. Not at all.

But the idea is to start that process, to take a moment and make a small statement like that… When a women puts on a suit…her image increases in power and respect. But when a man puts on something that’s feminine, like a pair of high heels, it’s a comedic tease. It’s funny. It’s seen as degrading.

By doing this publicly…it gets men to think about just how much it sucks to walk down the street in high heels, how much it hurts and how difficult it is. And the guys start to think about other things like what’s it like to take the subway, what’s it like to walk down the streets any day or night as a women, you know, when you’re subjected to unwanted calling or street harassment.

The Eyeopener: Why is this event important in light of the recent sexual assaults on campus?

Jeff: It’s very important because there is work that we all have to do, to make our spaces safer to work, live and study. And this engages men to think about that.

In seeing this event and hearing about it, it’s a way of catching people’s attention and talk about the positive role men can play; as allies, as engaged bystanders, as role models.

You know, not all men are part of the problem, it’s that men aren’t doing enough to be part of the solution… As men, we need to talk about the things we can do.

The Eyeopener: Where are the proceeds of the event going?

Jeff: The proceeds go to the White Ribbon Campaign. It is the world’s largest grassroots effort to engage men in working to end violence against women.

We’re based out of Toronto. We have no core funding from the government. This is our major, one time a year fundraising initiative.

The Eyeopener: What was the turn out like this year?

Jeff: We had 1000 people come out. Obviously it’s men and women. It’s not just men. What’s great is we had people from all walks of life.

We had different generations there, we had folks from the corporate space, we had students, we had young people, we had people just from the general public coming up and not just people who were fundraisers or pledgers or people that were registered to walk– but just anyone was invited to walk along with us and that’s what happened. 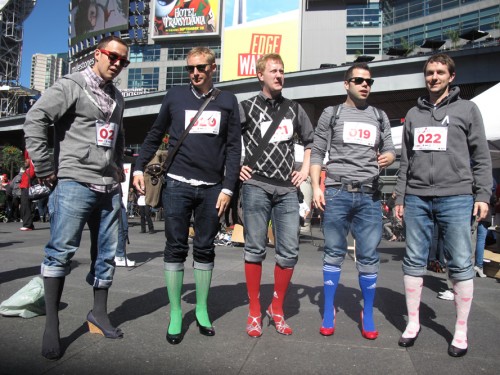 Colourful high heels paraded down Yonge Street at the annual Walk a Mile in Her Shoes event. Photo by Carly Thomas

The Eyeopener: How much was raised?

Jeff: About $120,000 had been raised before the walk had even started and three students at Ryerson raised $3,000.

And seeing hundreds of men making a statement like this, in a downtown street, on Yonge [Street], on our Ryerson campus– I mean it’s a statement to other men, saying hey, we want to step up and you should too.

It’s literally one step at a time, in high heels or not.