“On behalf of Toronto city council and the citizens of Toronto, thank you for the success, happiness and pride you have brought to our city and to our country,” Kelly said.

Director of athletics Ivan Joseph also presented them with Ryerson hats to “welcome them to the Ramily.”

“The Olympics are very special to us here at Ryerson,” Joseph said.

All four of the skiers competed in moguls at Sochi and three of them won medals. Kingsbury captured silver behind fellow Canadian Alexandre Bilodeau while Justine won gold and Chloé won silver.

“We had so much fun representing Canada,” Maxime said. “Even though we were far from home we could feel the support.”

Just last week the four were in France to compete at a World Cup. Bilodeau and Kingsbury won gold and silver and the Dufour-Lapointe sisters finished second, third and fourth.

“It’s so beautiful to celebrate our games,” Justine said. “And we are so honoured to share it with you.”

Kingsbury said seeing the CN Tower from the plane was such a happy moment because it meant he was home in Canada. But the Montreal native couldn’t resist jabbing the Leafs.

“Even though I don’t like the Leafs,” he said. “You guys are nice people.” 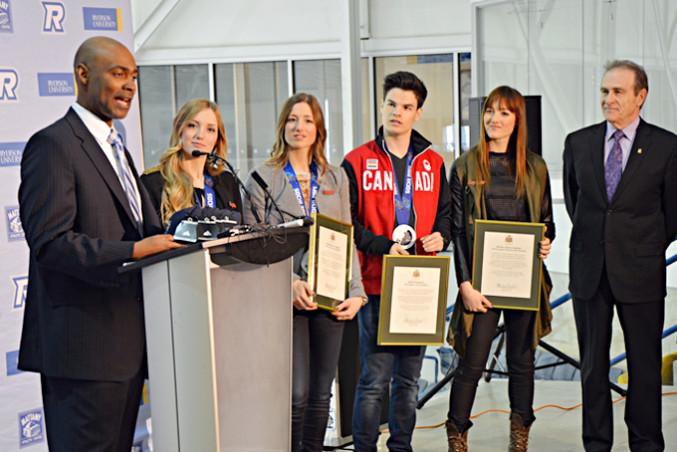