Police said multiple shots were fired near Mutual and Gould streets Friday morning. The victim was later found in a black Chevrolet Malibu, riddled with bullets on the driver’s side of the car, that was found at the intersection of Carlton and Parliament streets.

Toronto Police Services has identified the victim as Shmar Parris, 25. Police told The Eyeopener Parris was a resident of 145 Mutual Street, an apartment building directly across from the Rogers Communication Centre.

He was shot in the chest around 2:20 a.m and was later pronounced dead in hospital.

“Well I was up around 2:30 a.m. and I heard five really loud gunshots go off, immediately after I heard a screeching noise sounding like a car driving away really quickly,” said Christina Abdallah, a first-year professional communications student who lives in Pitman Hall. “I ran downstairs to the service desk to ask what was going on and they told students to stay inside the building.

“So after that I was really scared, I can’t believe something like that would happen right outside my window.”

Monica McIlroy, a first-year professional communications student who was staying with a friend in the International Living and Learning Centre, also heard the gunfire.

“I was shocked and extremely nervous,” she said.

“Being in the wrong place could have ended badly for a Ryerson student living in residence.” 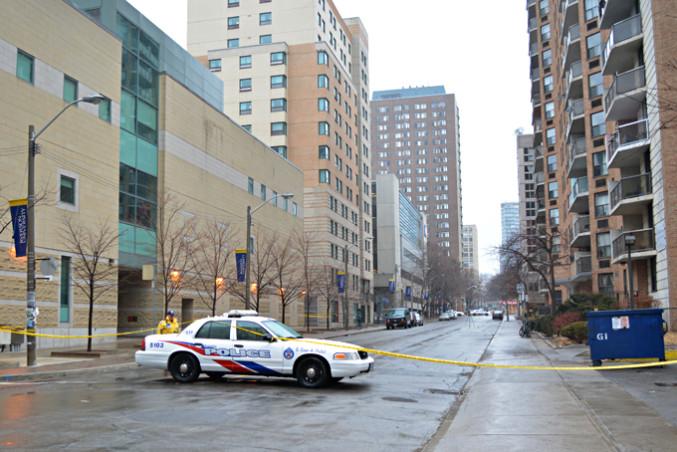 Police blocked off parts of Mutual Street near Ryerson’s student residences after a shooting left one man dead on April 4, 2014. Jess Tsang/The Eyeopener

Police believe the altercation started near Gerrard and Mutual streets until the crash at the intersection of Carlton and Parliament streets, according to a press release. Police said that a female and male passenger were in Parris’ vehicle at the time of the shooting. The woman made her own way to hospital with a non-life-threatening gunshot wound.

Det. Sergeant Steve Ryan held a press conference at 10:30 a.m. at Carlton street near Parliament to discuss the shooting.

The victim is known to police and led a high-risk criminal lifestyle.

“This was not a random attack, it was a planned attack,” said Ryan.

According to Ryan the suspect vehicle chased the fleeing victim, firing multiple shots along the way.

Police have no suspect information, but believe the vehicle to be a “light-coloured new style SUV,” according to Ryan. At this time, police are unsure of the number of shots fired.

An SUV matching this description was seen heading west on the Gardener and driving erratically.

Police did not release details on the male and female passenger, but said that both are cooperating with the investigation. Police are asking local business owners for any video footage they may have to aid in the investigation.

A rap producer who goes by the name DJ Folk confirmed to The Eyeopener that Parris was a Canadian rapper who went by the name Murda Marz. The producer said that he had known Parris for five years and had collaborated with him in the past.