One day after their season opening clean-sheet triumph over the Nipissing Lakers, Ryerson’s men’s soccer team decided to do it all over again, posting their second consecutive 1-0 victory against Sunday’s opponents, the Laurentian Voyageurs.

After watching the ladies’ side suffer a heartbreaking defeat earlier in the day, the men’s team came out with their foot on the gas in the first half, eager to avenge their schoolmates.

While dominating the possession game, the Rams struck iron three times in the first 45 minutes of action while limiting Laurentian to only two shot attempts, neither on target.

At the heart of Sunday’s win was defender Kyle Stewart, who was stellar in the first frame, making a slew of timely and effective clears.

“It was all about monitoring their offense,” said Stewart. “Watching the long balls, and communicating between myself, our keeper, and our other centre back.”

The lone goal-scorer on the day was Rams’ veteran striker Viktor Anastasov, who got his head on the end of a Michael Velasquez cross to put home what would ultimately prove to be the game-winning goal.

Anastasov was at the centre of numerous chances for Ryerson. He complemented his team on their strong start.

“We started off really well,” he said. “We had a lot of passing sequences and I thought we were going to get a goal in the first half one hundred percent.” 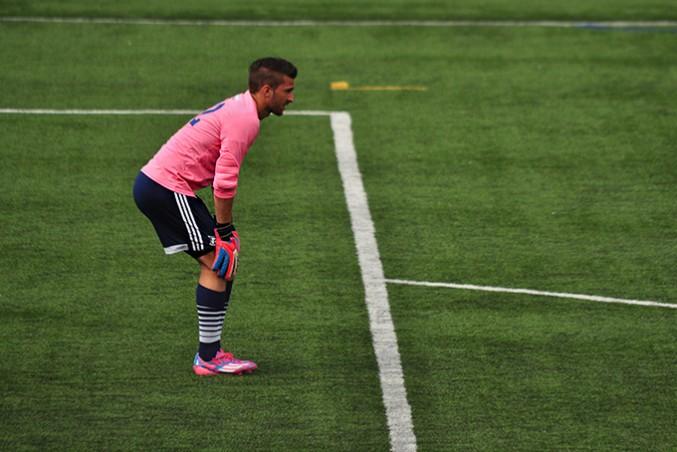 Now sitting at 2-0 and atop the OUA East standings, the team knows how important this weekend was and is happy to have made the most of it.

“This weekend, to me, was probably the most important weekend because we have a new team and a lot of new faces, so getting off to the right start is the most important,” said Anastasov. “From here we just have some work to do.”

Stewart also weighed in on the state of the Rams, stressing how eager the team is get to the next level.

“We’re just going for it,” he said. “We have a great midfield that can move the ball around. If it doesn’t happen this year, it will in the next two or three years because we have such a good young recruiting class.”

However, for associate coach Filip Prostran, this season isn’t all about the W’s.

“This team’s definition of success is different than last year’s nationals team,” said Prostran. “Right now our goals are to grow in this first phase of the season. What are goals are at the end of the year – we’re going to know after this first phase. We’re not ready yet. Maybe we will be by the end, but right now we want to grow and try different things. If you can still learn those lessons and get a win, there’s nothing better.”

Next up for the Rams is a date this Wednesday with Trent University, before hitting the road for Ottawa Saturday, where they’ll take on the Carleton Ravens.