The thunderstorms cleared just in time on Saturday, as Ryerson’s women’s soccer team kicked off their 2014 season opener against the Nipissing Lakers with a 3-1 loss.

Despite going into halftime with the score evened up at one a piece, the Rams gave up two quick goals after the half — which would prove to be the backbreaker in the game.

“We certainly have a lot of individual talent, I think we were nervous, very nervous initially, nervous to get on the ball,” head coach Kevin Souter said.

The Lakers struck first in the ninth minute, as Rachel Haine crossed the ball just outside of the right side of the box, onto the diving head of Sara Dorval, who sailed the ball past the fingertips of Ryerson’s keeper, Brittney Clendenan. 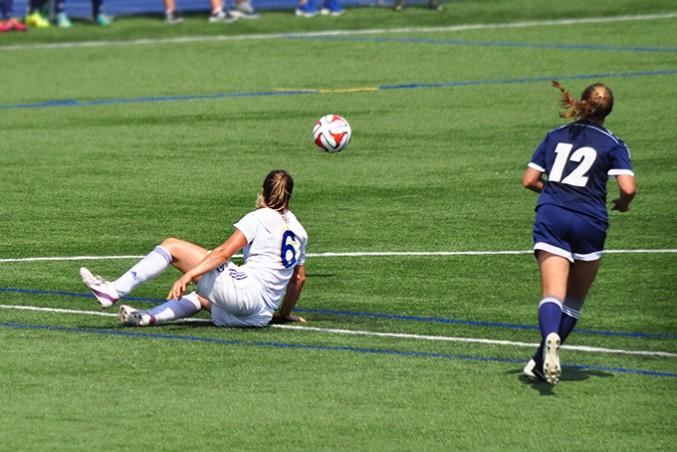 She started 35 yards out, pushed through the Nippising backline, danced around two defenders and broke free, ultimately finishing inside of the crease.

“Great finish, she caused problems, she’ll continue to work hard and cause problems against most opposition in the league,” Souter said of Rodkin.

“[Rodkin’s] got a tremendous work ethic, she did a lot of running on her own today, which means we have to get her some support,” Souter said.

With the heat beaming down at Monarch Park – Ryerson’s home field — at half, it was anyone’s game.

But Nipissing’s Caitlin Laughlin and Shannon Russell had other plans, scoring two goals within six minutes after the break.

Looking to rally and impress the bus load of fans that showed up midway through the second half, midfielder Nicole Paiva led a couple of promising rushes but couldn’t finish.

“There were some good spells of play, but from our perspective, a little bit disappointing because I think that we started playing after the third goal,” Souter said.

Ryerson’s backline was strong and very physical, led by fourth year Sarah Slattery, who was laying down the law, knocking down Nipissing players throughout the game.

The Rams changed their formation, adding an extra forward up top towards the end of the game, but no avail.

The shot count finished even at seven a piece, but with what appeared to be nerves, costly turnovers and fumbles, the score would remain 3-1 until the referee’s final whistle.

“It’s early in the season, we’ve only been working with this group for three weeks and there is still a lot to learn and give and take with the players and the coaches,” Souter said, “The good thing is that we’re young, and we’ve got lots of time.”

The Rams will be in action Sunday afternoon at Monarch Park, looking to earn their first win of the season against the Laurentian Voyageurs.