The Ryerson men’s hockey team (3-3) put an end to their three-game losing streak with a 5-3 win against the Laurier Goldenhawks on Thursday night at the Mattamy Athletic Centre.

The game started fast with the Goldenhawks scoring less than four minutes after the first puck drop.

But the Rams proved that they were not going to let the Laurier dictate the tempo when Alex Basso scored his first goal as a Ram just minutes later at 13:08.

As the hard-fought game continued, Mitch Gallant came up with the Ram’s second goal at 5:30, but their lead was short lived as the Goldenhawks tied the game 2-2 in the dying seconds of the first.

The second period was scoreless, but entertaining nevertheless.

With the puck travelling back and forth across the rink, fans were on the edge of their seat the whole time.

The Goldenhawks broke the tie early in the third.

With the momentum of the game on the line, team captain Michael Fine was able to tie the game back up at 13:08 as the crowd roared and shook the stands.

This was Fine’s first game back since his MCL injury.

“I mean I got a fluky goal there, but I’ll take it, it feels nice,” Fine said. “I felt like in the second and third I was starting to get a bit fatigued, [I] just haven’t been on the ice for too long.”

With the game remaining tied for the majority of the third period the atmosphere was tense. 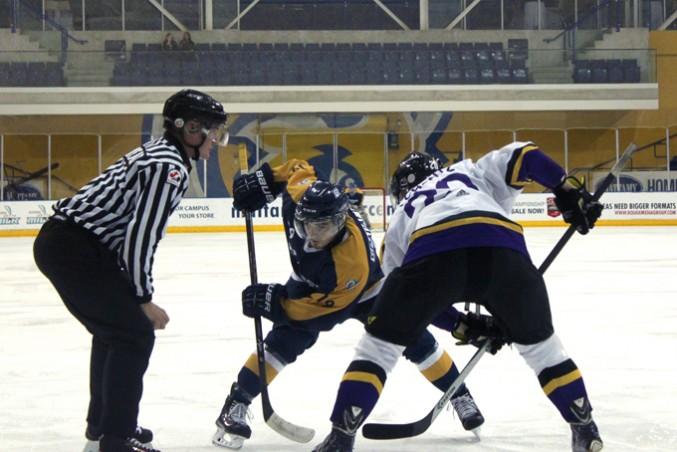 But when rookie Andreas Tsogkas scored he broke the tie for Ryerson late in the game, not a single Rams fan was left sitting down.

“It felt absolutely unbelievable, scoring my first goal and having it be the game winner today,” Tsogkas said.

With the clock running out and the Goldenhawks goalie pulled, the game was still on the line as the puck continued to fall in an out of the Rams’ possession.

But the Rams sealed the deal when Daniel Clairmont scored a final goal on an open net in the last 16 seconds of the game.

With student night bringing out a huge fan base for the Rams, the idea of a home-ice-advantage was felt very strongly by the players on Thursday.

“We had a lot of momentum from the crowd and I think that factored into a big thing for us, and we really used that to our advantage,” Tsogkas said.

Ram’s goalie Troy Passingham, who made 34 saves to get the win, said that he had did not have the best first period but that once he got settled in, they were able to play much better defense.

“I kinda just figured out how they were playing,” Passingham said. “I just adjusted my game and it worked out well for the last two periods there.”

The Rams will now travel to Waterloo on Saturday to take on the Warriors.