A single pair of boots can now incorporate a variety of styles and sizes — from long, short, thin and wide.

Tycra Wear, co-created by Ryerson alumnus Ivonne Serna, features winter boots with a detachable calf tube that can be replaced with one of a bigger or smaller size.

“We wanted to serve a market that has been underserved. We think that if you have thick calves, it’s difficult to find wide-calved boots,” Serna said. “At the same time I’m not just focusing on plus sizes, I have met people that have super thin calves.” 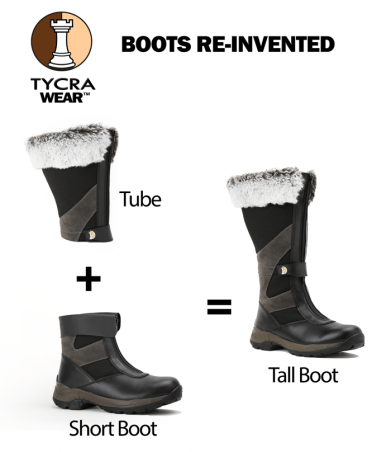 Those with thin calves often shop in kid’s stores, while women with wider calves must frequently select from a narrow range of dull neutral boots. Serna knows all about the limited market as her inspiration for the boots was ignited from a personal struggle.

“I used to be very thin when I was younger, but then, as my body matured, the boots that used to be very easy to pull the zipper all the way to the top, that was not happening anymore,” she said. “It’s frustrating because then you go to stores and you don’t find something that is cute and is comfortable and that you look good in.”

The boots originally started as Serna’s final year Fashion project, but Serna decided to turn the project into an entrepreneurial opportunity with her husband.

Serna and her husband Rafael Beltran used the resources they had to create prototypes of the boots but decided to turn to Kickstarter to launch their boot campaign.

But if Tycra Wear doesn’t reach this goal, all the money that have pledged will be sent back to donors.

In the future, Serna and her husband plan on expanding their product styles, colours and adding features like thick insoles, shock-absorbing midsoles, insulation and water-resistance.

“You could have different combinations of styles and colours. You could just change the tube and have a complete boot makeover,” Serna said.