The stakes have been raised in the crosstown basketball rivalry between the Ryerson Rams and the University of Toronto Varsity Blues.

When U of T hosted Ryerson on Jan. 7, it marked the first games played in the newly introduced BIA Cup.

“This is the beginning of the two schools taking advantage of the rivalry while also getting the corporate community involved,” said Beth Ali, U of T’s Director of Intercollegiate and High Sport Performance.

The cup is made out of a portion of steel from U of T’s Goldring Centre and a piece of concrete from centre ice of Ryerson’s Mattamy Athletic Centre (MAC), which is formerly Maple Leaf Gardens.

The first leg of the BIA Cup saw the Ryerson women lose a closely contested game, 74-71. The Ryerson men then trounced the Varsity Blues, 92-68.

The second set of games will be held on Feb. 11 at the MAC. If the four games are split, a variety of tiebreakers determine whom the cup goes to.

“It’s very similar to OUA tiebreakers,” said Ali. “If it’s exactly split, we go down to point differential, then points scored, and so on.”

“I think some of our athletes aren’t fully in tune with it yet,” said Clarke. “But there’s always been a rivalry with them, and this is going to help create it more.” 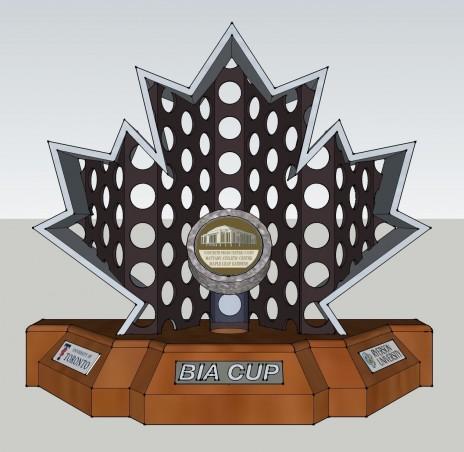