UPDATE: Unite Ryerson has decided not to pursue regaining control over their website, and will revert to uniteryerson.com, which they used last year.
The website of the “Unite Ryerson” campaign, www.uniteryerson.ca, appears to have been hacked.
A video embedded on the site’s main page prevents anyone from accessing any of the site’s content or links. There is a page view counter on the site as well.
It is currently unclear as to who initiated the hack, or how long it has been running.
Unite Ryerson is a slate of candidates running for the five opening executive positions in the upcoming RSU elections. Pascale Diverlus, the current Vice-President Equity, is running for RSU president. Ali Moeng, Zidane Mohamed, Anuja Jeeva, and Drew Silverthorn are running for the other four executive positions.
Transform Ryerson, an opposing slate of RSU executive candidates, said that they have other things to worry about. The slate opposes the RSU’s current policies, and is made up of students with strong ties to the Ryerson Commerce Society (RCS), Ryerson Engineering Student Society (RESS) and Ryerson Communication and Design Society (RCDS).
“Because our own website isn’t launched yet, we don’t have the time to worry about what’s happening with the Unite Ryerson site,” said Andrea Bartlett, Transform Ryerson’s presidential candidate, in an email.Fatima Sajan, the Chief Returning Officer in charge of overseeing this year’s RSU election process, said in a series of emails that she didn’t hear about the hack until shortly before 4 p.m. on Wednesday afternoon. She added that there isn’t anything the CRO is able to do at this time.
“Unless a formal complaint has been made by a candidate, there is no course of action for me to take,” Sajan wrote.
The website is advertised on Unite Ryerson posters, which have been distributed around campus as of today.
Eyeopener staff are still waiting for comment from the Unite Ryerson campaign. 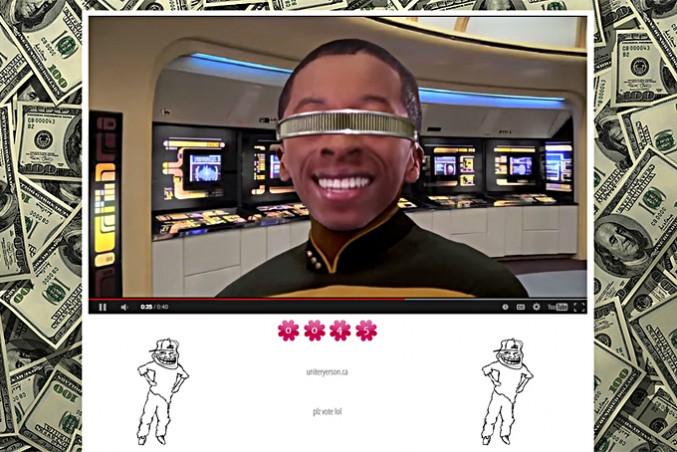