Dominick Tait on the bench during a timeout.

Dominick Tait, 17, and Alex Angus, 14, have come a long way. The boys are both from Cape Breton Island, N.S., nearly 2,000 km away. The two best friends are also hockey players. And they’re both legally blind.

On the weekend of Feb. 14 and 15, they were able to play on the same team in Toronto, in Courage Canada’s third annual national blind hockey tournament.

After their game, they take off their skates and change back into their shoes. They walk up the stairs of the Mattamy Athletic Centre’s bleachers where they’re immediately greeted by 11 of their biggest fans — their families. 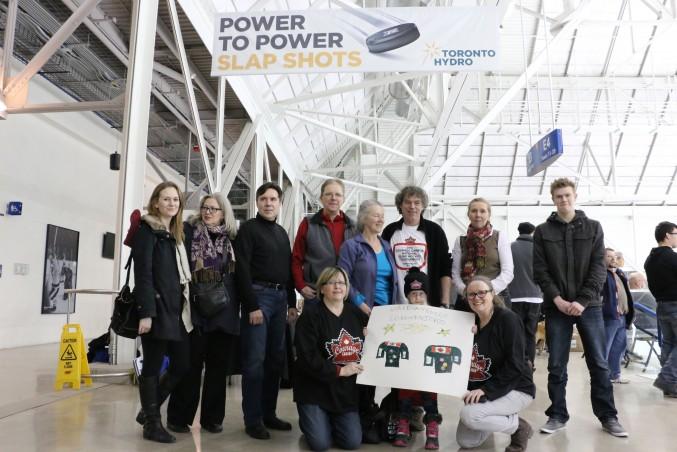 Alex Angus and Dominick Tait’s family who were supporting the boys over the weekend. Photo: Luke Galati

Alex, the youngest player in the tournament, says that his favourite part about hockey is, “everything.” When pressed about what everything entails, he says, “The skating, the shooting, the scoring, the passing, everything.” His mother, Denise MacEachern, confirms this, adding that he even likes the smell of his hockey equipment bag.

Alex says that coming with Dominick to Toronto for the tournament has, “given me a little bit more confidence, because I live in a place where it’s only two of us, only two of us with visual impairments.

“So, sometimes you feel a little bit alone. But then when you come here, you realize that there are other people too.” Dominick adds that, “It makes me feel like a normal person I guess — if that makes any sense.”

Alex and Dominick are two of the 104 players and coaches taking part in the weekend-long tournament, coming from seven provinces and the United States. And that’s only a fraction in comparison to the fans in the stands, and those watching and listening online with the live stream coverage. The Courage Canada tournament is a platform that unites the blind community and beyond. The medium just happens to be a slightly modified version of hockey, with athletes chasing a larger than ordinary black puck that beeps a high frequency noise. 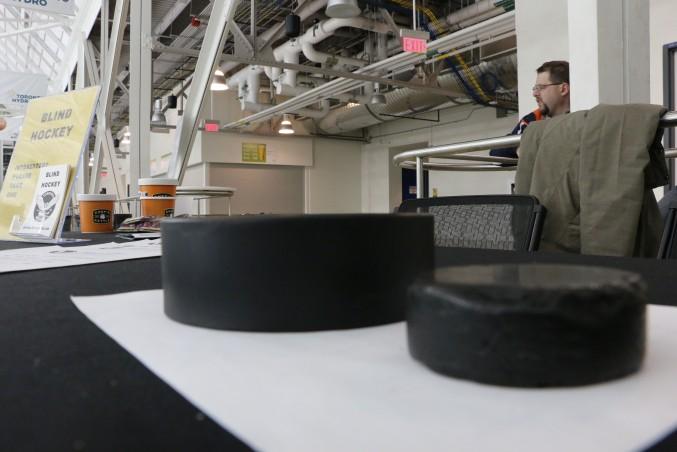 Look past the billion-dollar industry that hockey is in Canada, and this weekend you could see the sport arguably at its purest. In the same building that was once the home to the Toronto Maple Leafs, right now the game being played represents something refreshing. Admission is free, with a donation encouraged. Everyone, regardless of age can play, alleviating hierarchy. And, according to Scott Roberts who flew in from Vancouver to play this weekend, for the athletes, “It’s like a support system. We’re all there to support each other.” 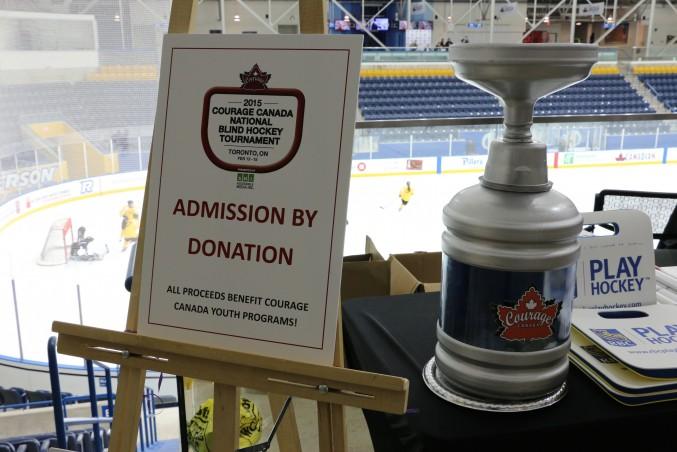 Upon entrance to the Courage Canada tournament, this is what you’re greeted with. Photo: Luke Galati

Roberts, 27, plays forward and is a full time student at UBC, specializing in First Nations education. He’s taking a holistic approach with gardening and is learning how to teach an entire school curriculum through nature. Math, history and science class, all through outdoor gardening.

He says that he had good vision until he was 17 years old. But, at the moment he is unsure of what condition caused his vision loss, as he was initially misdiagnosed. “It was a challenge,” Roberts says. “I had to adapt. But, most of us are pretty resilient, so we won’t let it slow us down.”

He’s lost his central vision, has 60 per cent of his peripheral intact and can’t see any detail looking straight ahead. Roberts also says that he has a blind spot as large as his hand. “But I can skate and I can see the boards.”

He says that the tournament is special for him because, “growing up and playing hockey, it was a big part of my life. So when I lost my vision and couldn’t do it anymore, it was like a big piece of my life wasn’t a part of me anymore.

“Just to be able to play the game that I love with like minded people who love the game and don’t let their disabilities hinder them at all. It’s all about breaking barriers and meeting new people, and showing that we’re not limited by our disabilities.”

Roberts says that he loves the freedom that he feels when he plays hockey. “I don’t have to worry about steps or about things in my way, and just to be able to go with my legs and fly down the ice is like nothing else.”

The fans listening to the live-streamed broadcast over the weekend heard Nicco Cardarelli’s voice, providing the colour commentary for every single game. The week before calling the tournament, Mark DeMontis, the president and founder of Courage Canada called him and said, “We need another goalie, come on out. We’re going to put the blindfold on you for the day.”

Cardarelli says that, “When you’re out there, you get a different appreciation for it. I learned and saw how hockey brings people together and it almost levels the playing field. And, while these athletes and their stories are inspirational, on the ice they’re hockey players, like anyone else.” 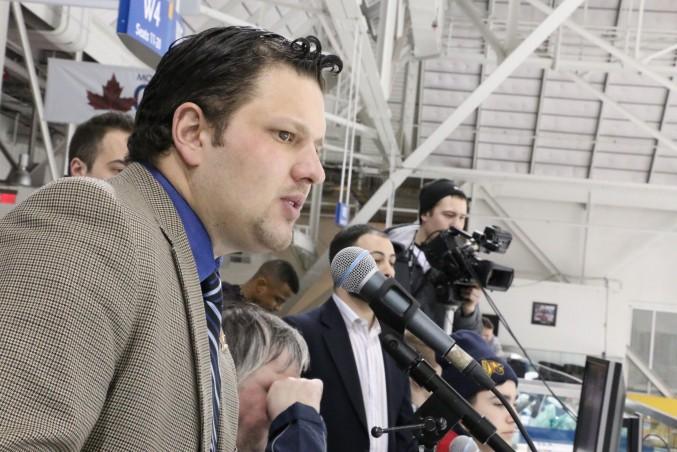 Sunday, Feb. 15 is the last day of the tournament and Dominick Tait will be spending his 17th birthday at the rink. It’s only his third time playing ice hockey in a game situation, his father William Tait says. But, already his mother Lois MacLellan has seen the sport change him. “After Dominick went to British Columbia to go to a hockey camp, he came back just a new man,” she says.

MacLellan says that it’s an incredible experience for her son to meet other visually impaired people who have become professionals, teachers, lawyers and are positive role models who can personally relate to his experience with being blind.“It gives him a chance to know that he can do it. He wants to go to university, he wants to be a teacher and he’s now meeting people that he can look up to and ask questions.”

For now though, it’s the final day of the Courage Canada tournament. Dominick and his friend Alex are focused on hockey, and the team that they play for just won the bronze medal game. The next day is Family Day in Ontario, and the boys will be heading to Toronto Pearson International Airport with a medal to bring back home. 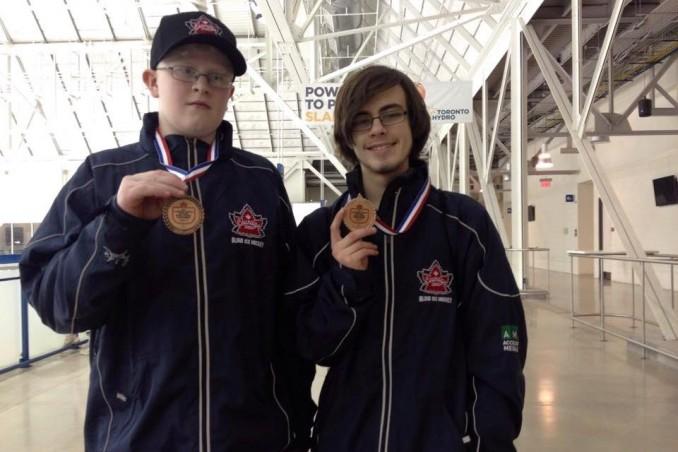 The two boys. Alex Angus and Dominick Tait proudly holding their bronze medals that they earned over the weekend. Photo: Luke Galati

Alex lives in Mabou, N.S., a village 10 kilometres away from Dominick’s home in Glenville. When Dominick gets back, he says that he knows exactly what he’s going to do. “Me and Alex Angus will get together, book some ice at the local rink and go at it.”