Regular season, postseason, any time, any place: it doesn’t matter to the Ryerson men’s basketball team. They’ll beat you in ways you didn’t know you could lose.

Ryerson torched the Laurier Goldenhawks by 46 points, their largest margin of victory this season, in a 105-59 win at the Mattamy Athletic Centre on Saturday night.

Everything was clicking for coach Roy Rana’s team, a cause for, and result of, nothing going right for Laurier all night.

Although they ended the first quarter with only a five-point deficit, the Goldenhawks shot a paltry 19-71 (26.9 per cent) from the field, putting up only 38 points in the final three frames.

On both sides of the court, the Rams played tough, gritty basketball, taking their fair share of bumps and bruises and returning them in kind. 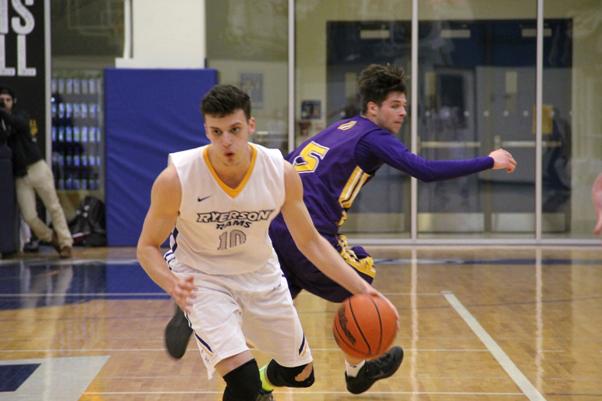 The Rams’ bench was at its best, totalling 44 points and maintaining the level of intensity needed to pull away early.

“The twelve guys that dressed [tonight] are all good enough to start in this league,” said point guard Jahmal Jones. “We expect nothing but the best from our bench.”

Forward JV Mukama played with pure passion in his supporting role, something his game has lacked significantly to this point.

Late in the fourth quarter, Mukama soared for a massive tomahawk jam. When he landed, the second-year forward stared out into the audience intensely. His gaze was steady, focused and straight-up scary, much like the Rams’ attack.

In his final season as a Ram, Jordon Gauthier reminded the crowd why he is one of the greatest players in school history. A fifth-year guard, Gauthier used his signature hustle and swagger to contribute 13 points in the second unit, more than any player on Laurier had.

Gauthier averaged only 3.5 points per game in the six games prior to this one, and he knows that his team’s success depends on each player doing his part.

“We’re peaking at the perfect moment,” Gauthier said after his team clinched a spot in the Ontario University Athletics (OUA) Final Four. “If I’ve ever been on a team that could win everything, it’s this one.”

Jones, a fellow senior, led the game in scoring with 23 points, continuing an end-of-season surge that has seen him eclipse 20 in four consecutive games.

Consistency, says Jones, is key if his team hopes to compete with the second-ranked Carleton Ravens on March 6.

“We’ve gotta play the toughest 40 minutes of our lives,” said Jones. “I’m not coming back next year. So for me, I want to win everything.”

Carleton held Ryerson to only 73 points when they defeated them in November and, unsurprisingly, the Rams are hoping for a happier ending in their second meeting. Assuming they are able to match the intensity they harnessed as the season wound down, they are in good shape to give the Ravens a run for their money.

All season, the Rams have given their all; against Carleton, they’ll find out if their all is good enough.