“[The students] passionately wanted to be included in this project,” said Charles Falzon, chair of the RTA School of Media. “We’re hoping to announce a project in the future where you could get a credit for it though.”

Forest, placed in the TIFF Bell Lightbox atrium, is inspired by nature and interconnectivity. Depicting a “luminous forest” filled with brush and “bubbles of light slosh and flow,” visitors spin circular dials changing the colour of the piece’s LED lights. When multiple people turn dials, the light’s neutral blue colour becomes an array of soft pinks, purples, greens and reds.

“I wanted to create something kids could experience hands-on and draw them in,” said Scott. [When you turn dials] the ripple affects everyone else’s. That’s how I got the idea of light as a fluid.”

Scott, also a computer engineer, used her own LED controller circuit board called Fadecandy on Forest. Her website reads that the hardware lets artists creatively use LED light easily over a computer.

“I’ve been interested in [LED technology] all my life, but only recently has it been practical to build pieces like this,” said Scott. “One thing I wanted to do with my engineering background was make the light look as aesthetically pleasing, smooth and inviting as possible.”

For the first time, Scott provided students with technology and blueprints while students built the piece in the RTA Maker Space at Ryerson’s Rogers Communications Centre. Its creation took seven weeks from January to February.

“The whole piece is made out of tons of tiny little pieces,” said third-year new media student Victoria Pietsch. “Keeping everything organized was difficult.”

For some of the students, one of the project’s challenges was making sure Forest was “kid-friendly.”

“All along the way, sharp edges and pointy bits have to be put into consideration so everyone can walk away smiling,” said Daniels. “We broke the labour down into bite size chunks so we could take it to the finish line and deliver.”

Forest, among other pieces at the TIFF Kids’ digiPlaySpace, will be allegedly visited by 60,000 visitors this spring. Other “interactive installations” include Talk Like A Robot, which changes audio pitch, format and tone of visitors’ voices while BitStrips Comic Creation Station lets participants create personalized cartoon characters and comics. Even Hitchbot – the “talking, trivia-loving” robot partly created by assistant professor Frauke Zeller from Ryerson’s School of Professional Communication – is at the space.

However, digiPlaySpace curator and Ryerson new media alumnus Nick Pagee is excited about Forest being at this year’s play centre.

“We looked at over 1000 installation pieces this year,” said Pagee. “But after looking at Micah’s piece, it was a natural choice [to include it in the space].”

The digiPlayspace is open until April 19, the end of the TIFF Kids International Film Festival. 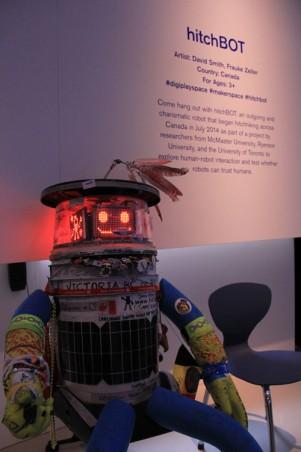