From the greasy smell rippling through the air beside the campus bookstore on Victoria to the hipster dominated corner of Bond, cars used to pile along the curb of Gould Street from morning until afternoon.

Every day, hundreds, if not thousands would take motor-oriented detours from the rush of the downtown, and go straight through campus. Back then, the little skip across the road from Balzac’s to Kerr Hall would have most likely left you flat on the pavement, and the last thing you would ever see and hear would be the fleeting laugh of the Torontonian driver who hit you.

Just a little under five years ago, Gould Street would be closed for the first time. Though it may sound recent, it started much longer ago — more than two decades to be precise. It was a time when the students, university and even politicians at city hall fought for the right to freely traverse across Gould Street.

Kyle Rae, the former city councillor for Ward 27 or Toronto Centre-Rosedale, was one of the main advocates from City Council who called for the street’s closure. “When we were looking at the Yonge-Dundas redevelopment back in 1995-96, it came up with our conversations with Ryerson, that they would like to see Gould Street closed,” said Rae. “The people who ended up being the proponents for what’s now called Dundas Square East, PenEquity, they agreed, and they thought it would be wonderful if there would be a way of reducing traffic or stopping Gould altogether.”

Rae, who was elected as councillor in 1991, said that the discussions to close the street started in 1995, when the topic of redeveloping Yonge-Dundas was brought to the table. He said that even though many people supported the project, there were still many obstacles in the way of achieving the street’s closure.

The first of these was the 1998 approval of the development of 10 Dundas East, the complex that sits on the northeast of Yonge-Dundas Square. For those who don’t know, it’s the building which hosts the movie theatres Ryerson students use for lectures. “The city agreed that they were going to need access to Gould during the development of the building, so we had to wait for the building to be finished,” said Rae.

One party, though, did not wait. “I was part of a group of students that was in support of pedestrianizing Gould Street, also called the ‘Close Gould Street’ campaign,” said Chris Drew, a Ryerson urban and regional planning graduate who first came to Ryerson in 2002. “It was a very informal group of students that just continually pressed the university and city councillor to make it happen.”

Serving as the Ryerson Students’ Union’s Vice-President of operations for two terms, Drew said that as Ryerson kept expanding, it became obvious that there were more students getting stuck on sidewalks.  “Ryerson has a huge commuting population coming in on transit, and getting around on campus was sometimes a challenge,” said Drew. He recalled memories of illegally parked cars along the street as well as students jaywalking to and from. “Sometimes you walked right out in front of traffic that was going at high speeds.”

The campaign was initially started by the Students for Sustainability coalition, an organization comprising of students from both Continuing Education Students’ Association of Ryerson (CESAR) and the RSU. CESAR President Denise Hammond said in an email that after opening the current student community centre in 2005, it was noticeable that there was a need to make the street pedestrian-friendly. Hammond also wrote that after the RSU closed off the street for orientation week, they began to see the street’s potential as a student hub.

In 2007, 10 Dundas East would be opened but again, another hurdle would have to be traversed.

“We started looking at shutting down the street, however, at that point, Ryerson had started the redevelopment of this site, and they needed to have access to all of Yonge for the delivery of all the stuff to build the centre,” said Rae, pointing at the Ryerson Image Centre. The project to build the Image Centre would begin in 2008, but this still did not halt the fight to close down Gould.

The initial proposal to close Gould Street would then be made in 2008 by the RSU, and would be made a part of Ryerson’s Master Plan later that same year. The Master Plan is a malleable, ongoing program announced in 2006 that directs Ryerson’s growth through urban expansion and pedestrianizing space on campus.

“The university also on its own started a Master Plan process to look at how to better utilize space on the campus, and so through that process, we basically used all the tools at our disposal. We held protests, we enlisted the support of the university, we went to all the town hall meetings and community meetings for the Master Plan process and we wrote letters to our city councillor,” said Drew. “During the Ryerson students’ annual general meeting, we asked students if they thought Gould Street should be closed, and they almost unanimously said yes. The students actually voted to start a campaign to the Ryerson Students’ Union, and the university was completely on our side the entire way, so it was a great example of students, the university and the local city council — all of us working together for a goal.”

After years of waiting, city council announced the closure of Gould Street as a pilot project, officially closing it on Aug. 23, 2010, for a one year trial. During this period, Ryerson used Gould to host an assortment of campus events, as well as test reactions from both the student body and city to the street’s closure. 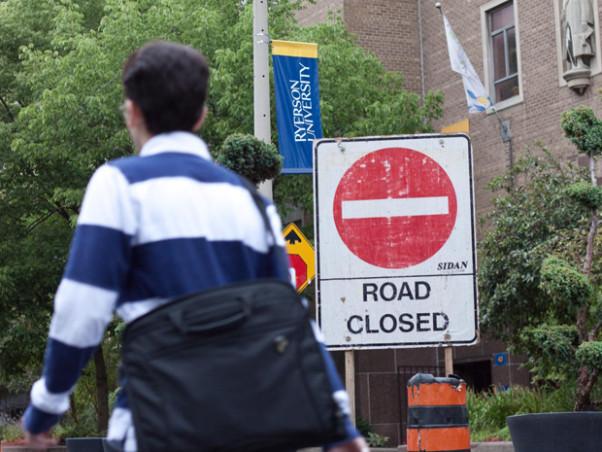 An Eyeopener file photo from September 2010 of Gould Street’s closure.

“So finally, in around 2009, it got approved, and then we shut down the street on a trial basis, no one thought it was going to be reopened, everyone knew it was going to work,” said Rae.

The trial period, which was supposed to end on Sept. 30, 2011, would then be extended for another six months by the Toronto and East York Community Council. “Although we had to sell it to council as a trial, everyone knew it was going to happen, so then in 2011, it came back to what to decide with the trial, so it was approved,” said Rae.

O’Keefe Lane to Bond Street, as well as parts of Victoria Street, would be the only parts of the street left open. Although as Michael Forbes, the manager of media relations at Ryerson explains in an email, the eastern-most part of Gould Street had to remain open for fire trucks and both emergency and utility vehicles. The open parts were also due in part to Ryerson’s garbage collection system. “Ryerson had difficulty with how they were going to centralize their garbage on campus, and they didn’t know where it was going to be, and they decided in the end that all their garbage is going to be circulated over there, which made it difficult for us to go all the way over to Church Street,” said Rae, pointing at the exterior of Kerr Hall’s southeast corner.

After Rae left office in 2010, he was preceded by Coun. Kristyn Wong-Tam, who also supported the closure of Gould Street.

After some deliberation, the community council passed the decision to close the street permanently on Jan. 10, 2012, and on Feb. 6, 2012, city council voted to close Gould Street for the next five years, making it a full-time pedestrian walkway until the decision’s review in 2017.  The fight for the street finally came to an end — at least until another two years from now.

“It’s a narrow road to begin with, and people walking by, there’s so many students, and I just wouldn’t feel safe,” says Alan Law, a first-year media production student. “I’m glad they made the decision to close the street, and I think it’s working for us.”