A men's washroom on the third floor of the Library building.

There’s two-ply toilet paper at Ryerson — and if you’re a student, you don’t get any.

Every Ryerson bathroom supplies one-ply toilet paper, except two floors of one building.

The Eyeopener discovered a box of the two-ply goodness on the bottom of the Student Campus Centre (SCC), which raised questions of which bathrooms they’re used in.

Student washrooms are stocked exclusively with that translucent, gotta-fold-it-thirteen-times one-ply.

The top two floors of Jorgenson Hall — 13 and 14 — carry the thick, absorbent two-ply.

Ryerson President Sheldon Levy’s office is steps away from the two-ply supplied bathroom.

“When I found out about this on day one, I said this is shocking, embarrassing, make sure this doesn’t happen,” Levy said.

But this “has been the allocation pattern for the past 10 plus years,” said Ryerson spokesperson Michael Forbes. There is no conclusive reason for the toilet paper distribution.

But the toilet paper allocation could change. 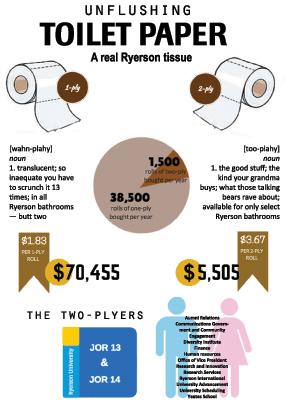 “We were alerted to this [different toilet paper price] and changes are being made,” Levy said.

Janice Winton, Ryerson’s vice president administration and finance, said the university has “looked into converting to two-ply across campus.

The change would add about $80,000 per year to the budget and we might have to retrofit some of the paper dispensers.”

There may also be an infrastructure issue with a two-ply take-over.

“Some of the older pipes may not be able to handle the increased volume of paper,” Winton said.

Ryerson buys approximately 38,500 rolls of one-ply and 1,500 rolls of two-ply per year — varying on the month and whether classes are in session, according to Forbes.

“That said, the cost of two-ply toilet paper is approximately double the cost of one-ply.”

According to Kerri Bailey, Ryerson’s manager for campus facilities and sustainability, Ryerson spent $76,104 on both one-ply and two-ply toilet paper in 2014.

On average, Ryerson spends $5, 505 per year on the two-ply supply of toilet paper.

Clarification: An earlier version of this story did not note that several spaces leased by Ryerson, off campus, have two-ply toilet paper. Alumni relations, diversity institute, Ryerson international, finance and human resources’ offices are these off-campus spaces. On-campus, only Jorgenson Hall’s 13 and 14 floors have two-ply.