The Rams fired a total of 36 shots at Laurier’s goalie Colin Furlong on Thursday night, but only managed to beat him once. Troy Passingham was solid in net for Ryerson, stopping 29 of the 32 shots he faced in the loss.  When asked, Ryerson’s assistant captain Brian Birkhoff said the team’s work ethic contributed to the loss.

“We’re not going to win any game if we get outworked- skill doesn’t do it,” said Birkhoff. “It [comes] down to work ethic, and we seem to be having trouble stringing 60 minutes together.”

Laurier opened the scoring just over five minutes into the game, when Will Cook beat Passingham on a penalty shot. The teams traded chances throughout the rest of the period, but at intermission the score was still 1-0 Laurier, with the Ryerson leading the shots 13-10.

Both goalies shined in the second period, each coming up big for their team. Passingham made a giant 2-on-1 save for the Rams early in the period, meanwhile Furlong turned away all 24 of Ryerson’s shots through the first 40 minutes. Laurier struck late in the period, when Derek Schoenmakers scored for the Golden Hawks on the power play.

Ryerson opened the third with Michael Fine finally beating Furlong to get the Rams on the board. However Laurier restored their two goal lead 9:44 into the third period, when Christian Mroczkowski put a shot by Passingham on a quick rush.

“[We need to] play for the front of the jersey rather than the back, and lay it all on the line,” said Ryerson’s assistant coach Johnny Duco. “If we do that for 60 minutes there’s not a team in this league we can’t beat.”

The Rams’ next game comes on Saturday, when the team travels to play the Waterloo Warriors. 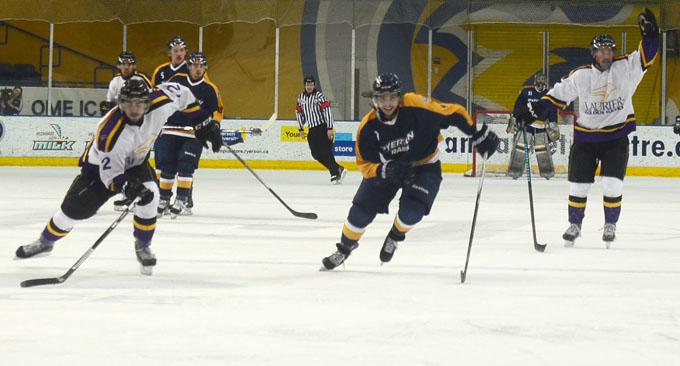