The Ryerson Rams women’s hockey team saw their losing streak extend to four games tonight after falling 3-1 to the Windsor Lancers at the Mattamy Athletic Centre. The loss drops Ryerson’s record to 2-0-14-1 on the season, as they remain last place in the OUA.

The league’s best line would be the difference for the Lancers. Erinn Noseworthy, Krystin Lawrence and Shawna Lesperance are one, two and three in OUA scoring. All three would score tonight for Windsor, while Emma Rutherford had the lone goal for Ryerson.

“They did what they’ve done all season, they found ways to put the puck in the net despite our efforts to hold them tight” said Ryerson coach Lisa Haley of Windsor’s star trio.

Ryerson spent most of the first period hemmed in their own zone, and were outshot 10-5 in the opening frame. The visitor’s pressure would pay off midway through the period as Lesperance would put the Lancers up 1-0. The goal was her OUA leading 13th of the season.

The Rams, however, would respond well to start the second. Four minutes in a long shift in the Lancers zone would pay dividends, as Rutherford would end up all alone in front of the net. Rutherford’s initial shot would be stopped, but she would bury her sixth of the season on the rebound to tie the game 1-1. 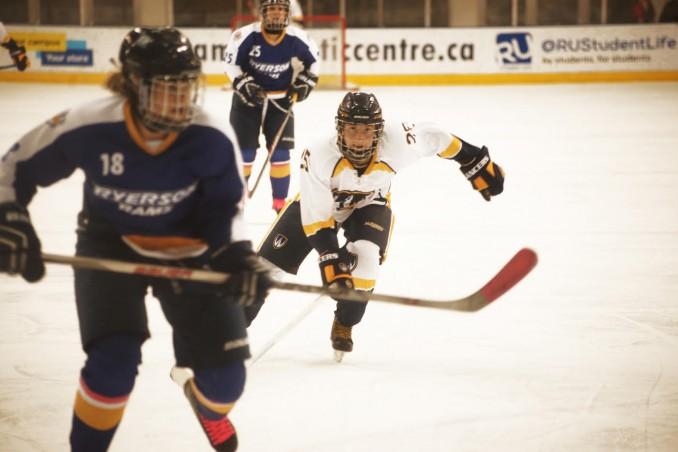 Windsor were quick to respond, needing only three minutes after Ryerson scored to regain the lead. Lawrence would score her 9th of the season on the power play to make it 2-1 Lancers. They would then double the lead on Noseworthy’s twelfth goal of the season, taking a 3-1 lead into the second intermission.

Ryerson would have several chances in the third period, including three power plays, but were not able to take advantage. Windsor goaltender Hanna Slater would stop 22 of 23 Ryerson shots for the win.

“We’re not going to win a game scoring one goal,” said Rutherford, “so we need to bury a lot more of our chances.”

Scoring had plagued the Rams all season, as they have the worst goals per game in the OUA with 1.06, and have only scored 18 goals in 17 games all season. 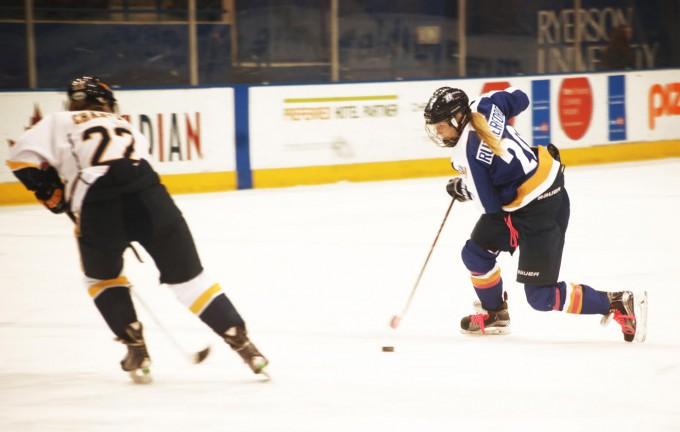 While Ryerson had difficulty putting the puck in the net, rookie Sydney Authier did a good job of keeping the puck out of the Rams net. In her first ever game Authier stopped 20 of 23 shots against while facing the league’s best attackers.

“I was a little nervous but once we got in from warmups and I got the feel of it I felt good,” said Authier of her debut. “Going into the game I felt confident, they gave me some easy shots at first just to get the feel of it.”
Ryerson will be looking to break their losing streak tomorrow, but it won’t be easy. The team will face the defending CIS Champions, the Western Mustangs, tomorrow afternoon at 2:30 p.m. at the MAC.