Ryerson’s third ranked men’s volleyball program is headed back to the OUA Final Four, following a playoff victory against the sixth ranked Western Mustangs. A team the Rams had swept comfortably in their season series (2-0.) 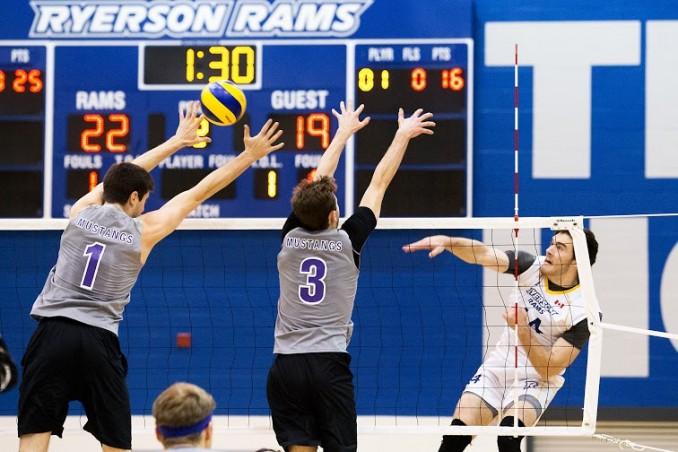 “I don’t like to look at rankings, and it really doesn’t mean anything to be ranked. We just need to remain focused on doing our own thing – our side of the court, and really stick together as a team,” said third year standout Lucas Coleman.

Head Coach Dustin Reid expressed his respect for the Mustang program as well before the matchup, saying “they have a rich tradition of national and provincial success, so it’s not going to be hard getting motivated for the game.”

Things got going a little slow to start the first set for the Rams, with the home team needing a few minutes to get settled into the playoff game. Once they did, play was high-flying and faced paced, with both teams staying within striking distance of each other. Things got going late in the set with a pair of kills from Coleman, and the Rams eventually winning the set 25-16.

“Both teams had to face a bit of adversity, which I think was important for us in particular,” said coach Reid about the earlier difficulties of the contest.

The Rams got out to a strong start to open the second set, but were quickly surprised by the Mustang’s unwillingness to quit. The set consistently featured the defensive capabilities of 6-foot-6 senior Uchenna Ofoha at the net, whose presence proved valuable in the closely contested 27-25 second set victory. 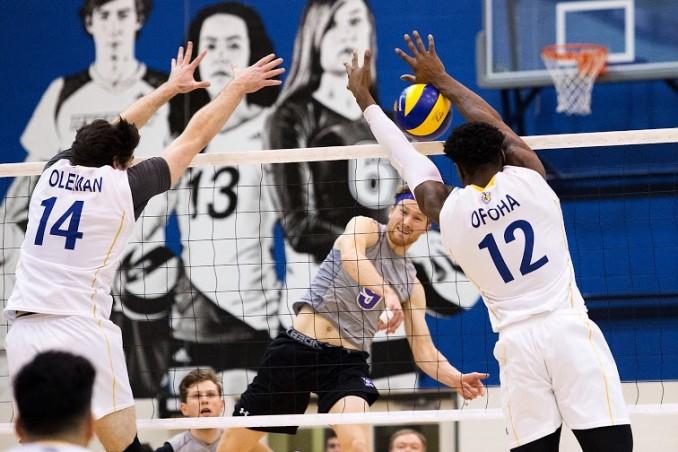 The Rams, looking to stay perfect on the day, started he third set off right. Jumping to an early lead in the set, following blocks from fifth-year Robert Wojcik, and a kill from fifth-year Alex Dawson.

The blazing pace of the latter portion of the second set though seemed to have effect on the energy of the Rams players in the third, with the Mustangs earning their first set win on the night (26-24.)

Western’s resilience was a surprise to many in the crowd, but was expected by Rams Head Coach Dustin Reid, who said “Western couldn’t have played better, they’re a proud team with a lot of tradition, they’ve had great results in the past few years, and they made us work for it.”

The fourth set was where the home crowd would see their Rams break the game wide open. With the Mustangs having no answer for the balanced attack that Ryerson boasted. Coleman, Wojcik, and Dawson, all proved key in the playoff win, and led the boys to victory in the game’s fourth and final set.

But there was no denying third-year Lucas Coleman would finish the contest the undisputed star of the show. Closing with a game high 21 kills; with Robert Wojcik, and Alex Dawson not far behind with 16 and 10 respectively.

Coach Reid acknowledges what’s ahead will be difficult for the boys, but if the team remains dedicated, together, and confident he says “ we like our chances against anyone.”

The Rams will play the Queens Gaels in the semi final, this week in Hamilton, where they’ll look for their first birth into the national tournament.