On a snowy, grey Thursday, distinct among the clatter and slush of Eric Palin Hall is the hushed peace of Cyndy Baskin’s office. It’s quiet, with a snug carpet and a tidy desk. All around the room are symbols of Indigenous culture, feathers, artwork and displays that show her roots.

Baskin is of the Mi’kmaq and Celtic Nations — she is of the Fish Clan and is known in those circles as The Woman Who Passes on Teachings. Fitting then that she works as a social work professor at Ryerson, where she is also the academic coordinator of the Chang School’s certificate on Indigenous knowledges and experiences in Canada.

While over the years she has been successful in helping develop curriculums for various programs on campus (social work, midwifery, early childhood education, nutrition, public administration), she notes that one of the major hurdles in her work is the inflexibility of certain faculties, whose coordinators have trouble justifying spending resources on increasing Aboriginal content in their programs. 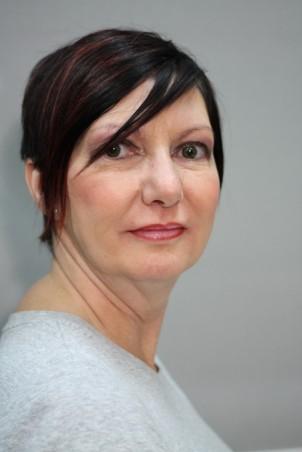 “It’s not easy to get a lot of the schools or programs on campus to buy into this. It takes a long time building relationships with people,” Baskin says, adding that the lack of unity across the faculties makes pushing for more Aboriginal content difficult.

In September of this year, members of Ryerson’s community looked to correct that by publishing A Call to Reconciliation at Ryerson — a letter specific to the university asking administration to confirm the intended actions outlined by the Truth and Reconciliation Commission (TRC). Among other things, they urged Ryerson to support current students and work to increase the number of Aboriginal student applicants.

But hard as it may be, it’s become more crucial than ever to encourage — and expect — that change. In June 2015, after seven years of work, the TRC (a holistic government response to the abuse and toxic legacy of Canadian residential school systems) published a call to action, in part addressing post-secondary institutions. Some of these actions concentrate on support and reconciliation — others are more academic, calling on the government to provide “adequate funding to end the backlog of First Nations students seeking a post-secondary education,” and infuse more Indigenous knowledge in every end of this post-secondary education, regardless of discipline.

As chair of Ryerson’s Aboriginal Education Council (a board of students, staff and faculty established in 2010 to encourage engagement and support of Aboriginal students), Baskin has led the charge on this factor, opening up talks with faculties not traditionally associated with Indigenous knowledge. Her work ranges from the straightforward — the development of more Aboriginal teachings in social work and midwifery — to the complex, as in the multi-year talks with the journalism school, which is the only program at Ryerson so far that has agreed to offer a new course (on media and Aboriginal understanding) next year. “I think [others] are just nervous because they really don’t know much of anything and they’re afraid to admit it,” Baskin says. “They don’t know where to start.” 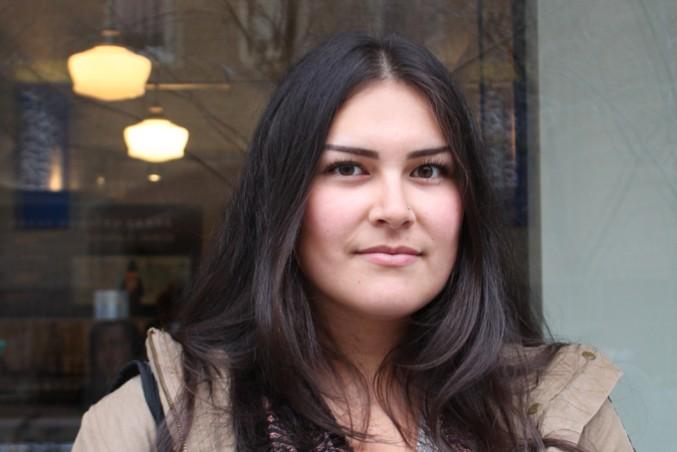 Robbie Nakoochee’s dream graduate program will thrust her head-first into Ontario’s parkland. Nakoochee, a First Nations Cree whose family originates from the lands surrounding Fort Albany, Ont., received her admission to a two-year term at Guelph. Now in her final year at Ryerson, she wants to apply her environment and urban sustainability degree to the intersection of Aboriginal communities and Ontario’s park systems.

Although she had a hunch that she’d get the spot, she was still flooded with relief when she noticed the funding package was larger than the one she’d already received from York. Yet as her eyes paced over the details of the congratulatory email, she couldn’t help feeling a pang of guilt — the same feeling that she’d had upon admission to Ryerson six years ago.

“I feel like I’m categorized as separate from the regular student body,” explains Nakoochee. Sometimes when she succeeds at something, she feels her efforts aren’t the most important — but that her status as an included “Aboriginal woman” is what matters. “It’s almost like … I’m just the token native.”

“I feel like I’m categorized as separate from the regular student body … It’s almost like … I’m just the token native.”

The statue of Egerton Ryerson that stands at the meeting point of Gould and Bond streets rests on land once settled by the Mississauga nation. It was a land of water and trees, known for its passages connecting what we call Lake Ontario and Lake Simcoe. In the book Mapping Toronto’s First Century, 1787-1884, the 18th century land deals made between the British Crown and the chiefs of Mississauga nation are documented through a series of maps and descriptions. All together it was a messy affair — what’s known is that the tract of land starting at Ashbridge Bay in Toronto Islands and extending many kilometers north of Toronto’s waterfront was handed over for a caravan’s worth of supplies and approximately $60 in today’s money. Nearly two centuries later, the flaws of the “purchase” ended with a $145-million deal being worked out by the government and today’s Mississauga chiefs. Now, most students scratch their heads in ignorance of the university’s history as speakers at some Ryerson events acknowledge their presence on Mississauga’s New Credit First Nations land.

Ryerson’s location in a thriving downtown core can be traced to this deal. But the university’s name draws its roots from a separate matter; the man it honours, Egerton Ryerson, was partly responsible for many things: among them the free public education system and residential schools in Canada.

“I would like to see more of that truthfulness on campus, in like a physical hard-copy,” says Nakoochee, who stresses the need for acknowledging Egerton Ryerson’s ties to the residential school system just as much as his work in Toronto’s early educational development.

Investigating these residential schools, which traumatized generations of Aboriginal children and families for 120 years before being closed in 1996, was at the core of the TRC. The official commission formed in 2008, with the mandate of uncovering the truth about Canadian residential schools and collecting research and survivor testimony of the atrocities committed in the system. It detailed systemic cruelty, widespread abuse and a resounding, multi-generational impact on communities, brought on by the forced assimilation that tore away the identities of children — all of it sanctioned by the government of Canada and tied, inevitably, to Ryerson.

Decades later, issues faced by Aboriginal communities and students still remain on the sidelines — for some Ryerson students, this is not only cultural, but physical. One of the most pressing issues to Mark Szkoda, the student affairs director of the Indigenous Students’ Association, is their student space — specifically, the site of the Ryerson Aboriginal Student Services (RASS) office.

“Its location, the way I describe it, is like we’re on the reserve of Ryerson,” he said in a Feb. 23 panel about experiences on campus. “We’re tucked in on the third floor [of Kerr Hall], just in the corner and I don’t know, I think a more central location would be better because sometimes we feel disconnected.

“That space offers a sense of community that offers the difference between flunking out, and succeeding in school.”

“A lot of the Indigenous students here come from different communities all over, you know. They don’t know anyone here, so that space offers a sense of community that offers the difference between flunking out, and succeeding in school.”

That crucial need for community is familiar to Réal Carrière, a PhD student in Ryerson’s policy studies program. Carrière, a Nehinuw from the Northern Saskatchewan village of Cumberland House, was on a campus tour of Simon Fraser University (where he studied as an undergraduate) as the guides marched groups past various student services and resources. He remembers his tour guide happening to point out the space for Aboriginal students, before the group quickly moved on.

“I thought in the back of my head, ‘I want to go there,’” he recalls. “[But] they didn’t tell you anything about the student services offered there. After the tour, I went back there and it became my home — those were my friends.” 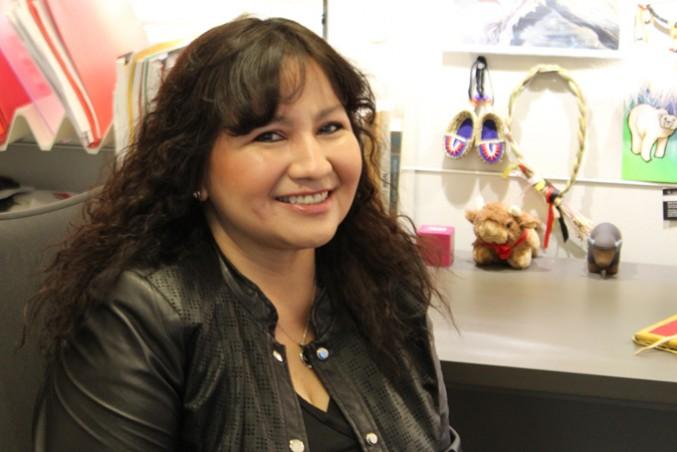 The space to gather, to celebrate and to heal, is fundamental for Aboriginal communities. At such a gathering on Feb. 16, sitting beside her daughter and in front of her grandson, Joanne Dallaire is explaining some of the rituals meant to help in the process of self-healing and honouring Canada’s missing and murdered Indigenous men and women.

After the cleansing smudging ceremony, the smells of burning cedar and sage rise from the middle of the two circles of seated participants, Aboriginal and non-Aboriginal community members alike. They face the red, black, white and yellow medicine wheel, but almost all eyes are on Dallaire — she is the elder, Shadow Hawk Woman of the Wolf Clan, the respected core of Ryerson’s Aboriginal community.

Her knowledge and expertise made her an obvious choice to co-chair a community-consultation initiative introduced by interim-President Mohamed Lachemi, who says it’s the best thing the university can do before issuing a response.

The president has asked Dallaire and Denise O’Neil Green (the assistant vice-president/vice-provost equity, diversity and inclusion) to lead this set of consultations, says Tracey King, who is Ojibway and Pottawatomi from the Otter clan. King, whose work at Ryerson has made her the country’s first Aboriginal Human Resources Consultant in post-secondary education, is a committee member of an earlier group — a working-group headed by Julie-Ann Tomiak, which began its work through a campus dialogue event (for the Truth and Reconciliation Commission’s Call to Action) in October.

These groups are collaborating in their efforts to help Ryerson as the administration tries to reflect TRC demands into programs and policies, King says. “They both have the same aim — they want to ensure that TRC’s calls to action are implemented in the best way.”

And Ryerson is well on its way to doing that, she adds. Through the support system of RASS, the introduction of the Aboriginal Education Council in 2010, and the creation of the Office of Aboriginal Initiatives which introduced strategic plans, the university has taken “positive steps towards reconciliation,” King says.

These steps, in May 2012, were recognized through one of the highest forms of honour — the symbolic and prestigious Eagle Staff.

“The Eagle Staff is a one-time only gift, which Ryerson was given for its leadership in terms of Aboriginal learning and education,” King explains. Made with a five-foot wooden pole, carved with the Seven Grandfather Teachings (Wisdom, Love, Respect, Bravery, Honesty, Humility and Truth) and adorned with 13 eagle feathers and a dream catcher, this Eagle Staff was designed especially for RASS and Ryerson — the first and only university in Ontario to receive one.

“It’s present during every convocation,” King says, “Whether there are Indigenous students or not. And that’s really transformative.”

Clarification: the TRC, though supported by the TRC Secretariat (a federal department), was not started by the government itself, but was organized as a result of the Indian Residential Schools Settlement Agreement, an agreement between the government of Canada and about 86,000 Indigenous Canadians. The $2-billion compensation package for the victims, who had been ripped away from their families and forced through the residential school systems for decades, was part of the largest class action settlement in Canada. It was a large chunk of this package that was allocated to organizing the TRC.