The Ragdolls, performing at the Drake Underground

All photos by Stefanie Phillips

A red light points directly onto the stage at the Drake Underground on Queen St. West, casting a pink hew on the three women standing at their microphones. They call themselves The Ragdolls.

Twoey Gray is the first to speak in the 11 minute spoken word poem they’ve all been working on since late August.

“They say I can’t because I’m too small, but they know I can God damn handle it,” she yells.

Beside her stand the rest of The Ragdolls collective, Ryerson students Cassandra Myers singing a soft melody and Londzo Drury playing the guitar.

She continues, “I scammed the triage nurse at the blood donor clinic six different ways this time. Exaggerated my height, read a fabricated number off the scale, faked my way through the paperwork, only to get caught at the cubicle interview, red-handed.”

Drury takes over the second part of the poem called Thick-Skinned, speeding up the strum of her guitar. Myers comes in for the third and final part striking the audience with her raw lines, “I stick a needle through my forefinger so that when I point, I am a compass. I listen to the magnet in my gut.” 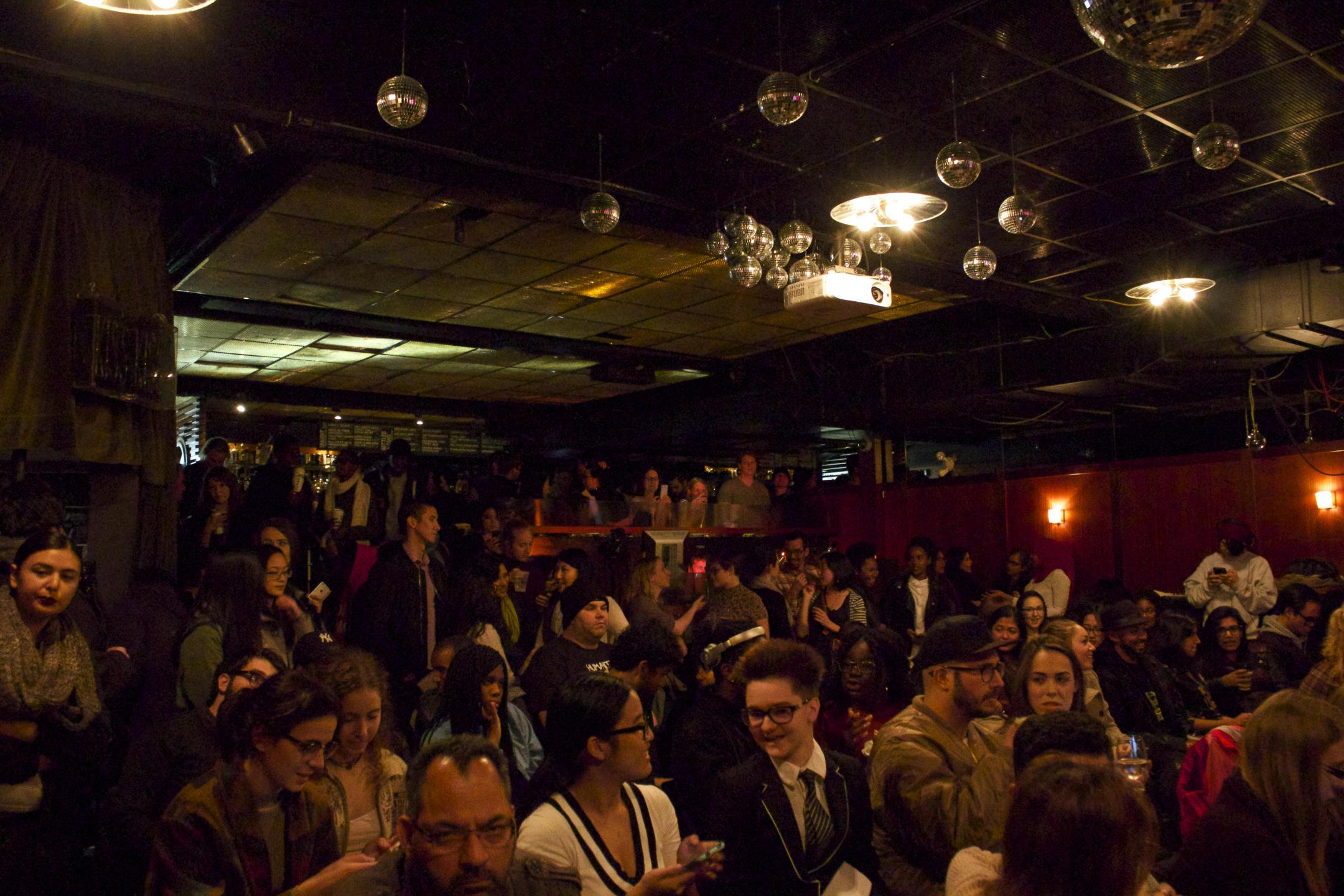 The crowd at the Drake Underground

The soft feminine sound of their poem takes over the room like a love ballad. All of the 199 people who crammed, shoulders touching, into the small room listen tentatively. The crowd didn’t have time to snap, say “Mmm,” or cry “word” during their set–like they had been for others–because they were remembering each word as if it held a key to the next.

The Ragdolls weren’t the only slammers performing last night; they were the feature set of the poetry slam presented by the Toronto Poetry Project. A feature is the poetry slam equivalent to a halftime show at a football game–the main attraction.

But each of the women started out in the poetry world, just like the 12 poets–or slammers, as they call themselves–who competed in the poetry slam surrounding the feature.

Gray says they became a group around the same time they were each competing separately in the BAM Youth Slam 2015-16 championships.

“We turned to each other and said, I don’t want to compete against you guys, I don’t want to have to hide my poems from you so that I have a competitive advantage … if any of us win we’ll split the $1000 [prize money].”

This birth moment of The Ragdolls collective came at a time when they had each been writing, editing and practicing their poetry together but they were being forced by the industry to look at each other as rivals, not friends, if they wanted to “compete in the big leagues.”

Drury remembers becoming such close friends with Myers and Gray that moving in separate directions was “simply not an option.”

Myers jumps in to add, “by binding together we were able to just dispel all of those negative voices that we were hearing, and be something more positive than we ever could have been alone.”

The competition aspect of a poetry slam has been somewhat controversial over the years with some artists, like Gray, questioning the scoring portion of a slam.

Usually in a house slam, like the event at the Drake Underground, five random people in the crowd are assigned judges and given scoreboards, numbered 1.0 through 10.0. After a slammer performs their poem the judges hold up their scoreboard for the host to yell out. 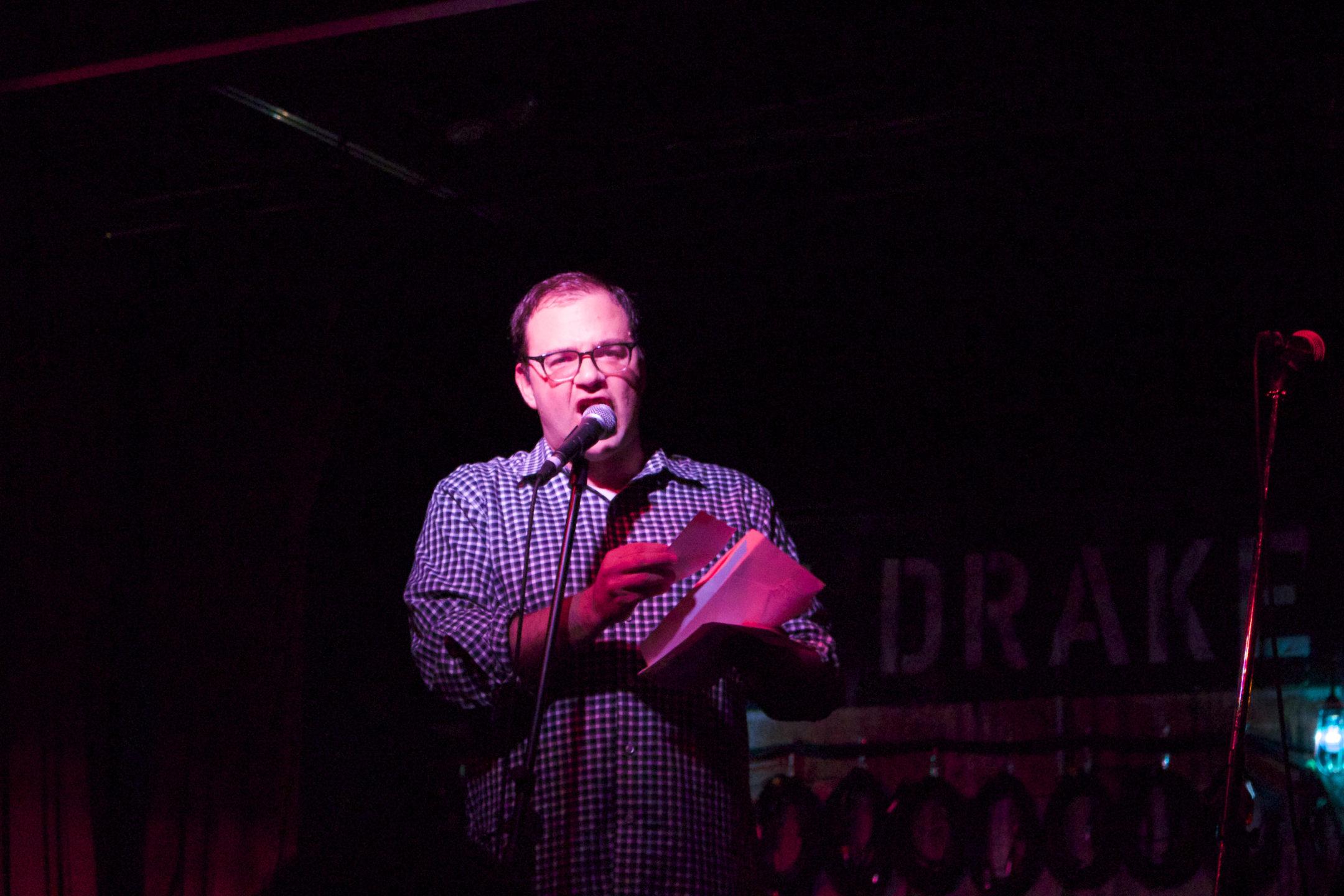 The host of the event, Dave Silverberg, explained that giving someone a 10 would categorize the poem as “orgasmic,” and giving it a 1.0 would be saying it was so bad you are “puking out of your nose.”

Gray explained that she gets really uncomfortable with competitive art because it attaches a grade to a piece that someone has “put their heart and soul” into it. But Myers and Drury disagree, saying it “encourages progress.”

What they can agree on is that the reactions from the audience make the nerves and stress of a competition setting disappear.

Last night, Silverberg encouraged the crowd to snap when they heard a line they liked. To press their lips together and make an “Mmm” sound, like they would, “after eating a good biscuit,” he said. He told them to say “word” when they really agreed with the slammer.

People snapped and people pressed their lips. By the second round of the slam, even the poetry slam virgins were saying “word” like gurus.

Drury explains that when she writes a poem specifically for audience hype and it doesn’t get a reaction it’s like “when a stand-up comedian goes on stage and their joke falls flat.”

Cassandra agrees. “When I go to a slam and it’s dead in the room I’m like, why am I here?” 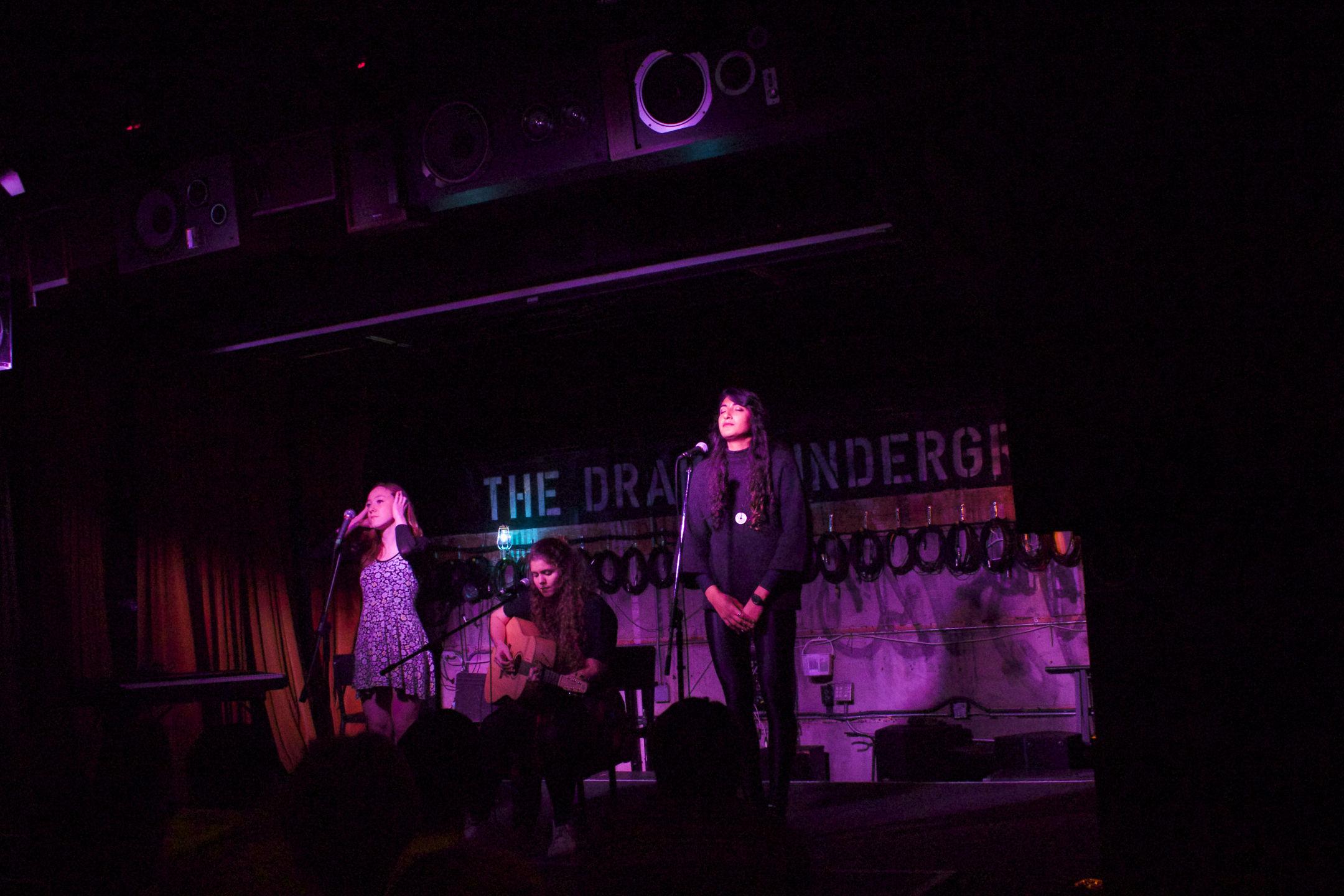 Their piece last night didn’t get that kind of reaction because they weren’t slamming in the competition; they were performing spoken word poetry–a graduation that came after months of practicing and helping each other grow.

For all three women, the mentality that they were stronger together helped them grow and later blossomed into the idea for their first ever chapbook, Hand Stitching for the Thick-Skinned.

The small paperback booklet contains the poetry they perform live individually and together. But for each of the poems, Gray, Myers and Drury helped somehow along the way.

The 11-minute poem they performed last night, to open their performance, finished as the three girls bowed their heads in-sync. Their synchronicity was a good representation of their friendship, teamwork and collective.