Ryerson’s Hyperloop team is looking for teams from other universities to partner with after showing its wheel system at a competition in Hawthorne, California.

Hyperloops are a mode of transportation in which a pod is suspended in a vacuum tube and travels through it at speeds of about 1,200 kilometres per hour.

The Ryerson International Hyperloop Team (RIHT) has developed a wheel system to attach to Hyperloop pods. The wheel system extends like an airplane’s landing gear. It’s designed to help pods make turns, deploy as an emergency measure and to prevent pods’ noses from dipping forward during deceleration like cars’ front-ends do when they slow down.

Hyperloop technology is under development and only experimental Hyperloops exist. SpaceX has one at their headquarters that’s 1.6-km-long and just over one-metre wide.

Since late 2015, the RIHT, made up of students Graeme Klim, Moeid Elahi, Min Prasad Adhikari, Wintta Ghebreiyesus, Tayo Shonibare and Jesse Brito, has been working on its system. The RIHT also works with five advisors.

“Sixteen months ago, it was a lot of brainstorming in the SLC on the whiteboards,” Klim, the team leader, said.

Now, the team has designed and built its wheel system, competed internationally, and gained close to 20 sponsors.

“Sixteen months ago, it was a lot of brainstorming in the SLC on the whiteboards”

The RIHT began so it could compete in the SpaceX Hyperloop competition. It competed against over 120 university teams from across the world in January 2016 and won an award in the “subsystem innovation” category.

Over a year later, Elahi said he still watches a video of his team being announced as a winner.

“Nobody really believed in us,” so getting recognized was very rewarding, Elahi said.

A year later, the Ryerson team was back at another SpaceX competition. 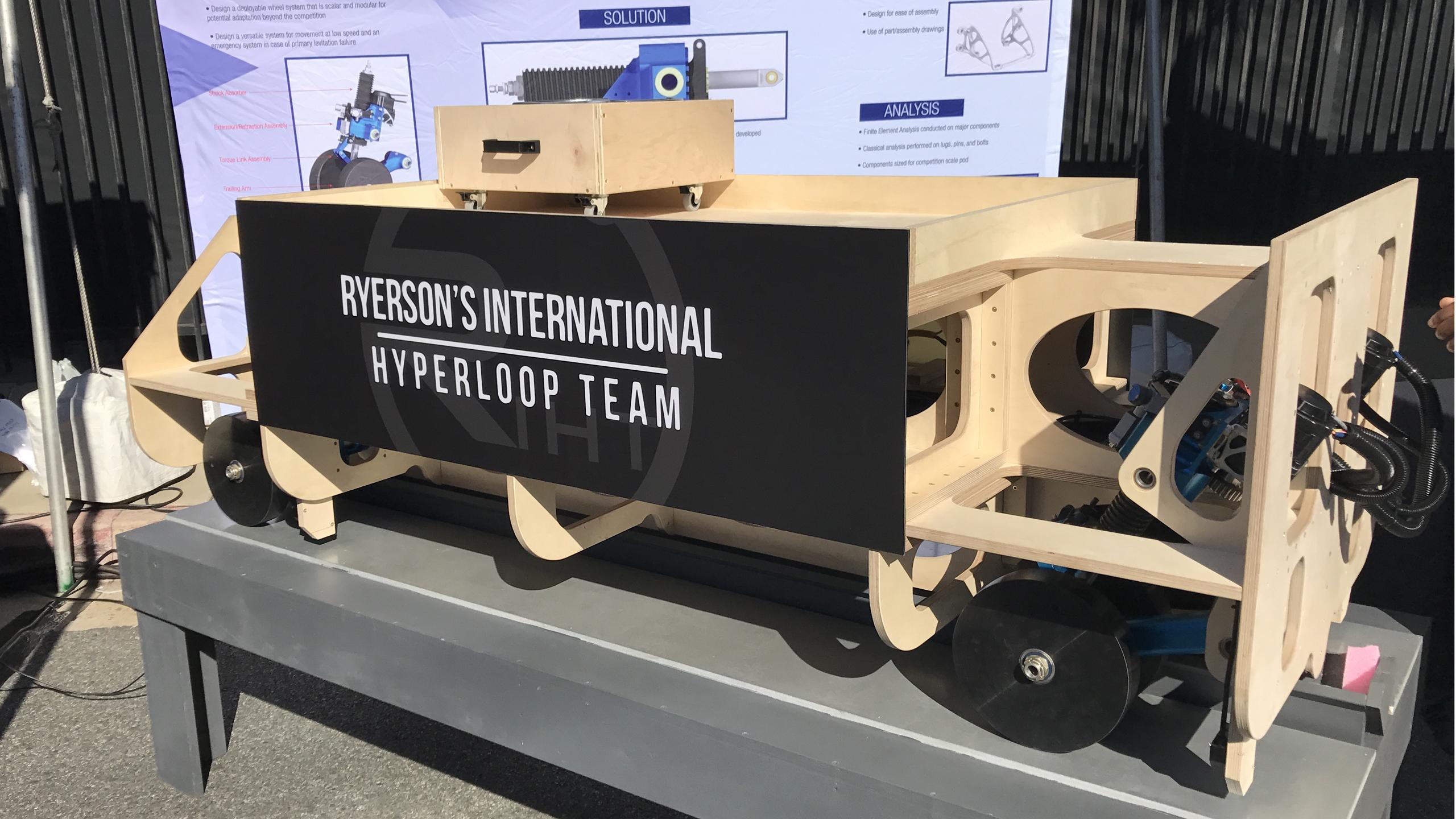 The Ryerson team was not competing to test their system in SpaceX’s Hyperloop prototype, but three teams that developed pod systems were able to as part of the competition.

RIHT team members said they attracted a lot of attention from some of the other 27 teams at the Hawthorne competition.

“We were quite successful,” said Elahi.

The RIHT’s wheel system was especially interesting to teams from other universities. Other schools’ pods have wheels, but the retractable wheel is special because it offers turning and stabilizing functions, team members said.

Other school teams are interested in integrating Ryerson’s system with theirs, Elahi said.

Because the Ryerson team designed its system to be modular (it has two connection points and its own power source) it can be scaled to fit different pods, provided they’re in the weight range of about 227 kilograms to 680 kilograms, Elahi said.

But as the RIHT was manufacturing, the UofT team pulled out of the partnership. When it did, the RIHT had to quickly adjust its wheel system. The team also designed a chassis to use in demonstrations of their system. It’s about three-metres long and one-metre wide.

Klim said the setback was stressful but the team’s sponsors supported it, which helped.

“We’ve never had a setback we couldn’t solve,” Klim said.

“When you want something, you’re going to put everything into it”

Another challenge the team faced in the past year occurred when part of the wheel system retracted too far and collided with another piece of the system. The parts hit with such speed and force that they nearly fused together. The team was able to fix the overshooting problem by adding a new switch.

Shortly before they went to Hawthorne, Ryerson team members tested their system at Safran Landing Systems, where Klim had worked as an intern. They were able to deploy it at about 354 kilometres per hour. Over 170 Safran staff came to watch, which Ghebreiyesus said was very exciting.

Safran is one of the team’s sponsors.

Seyed Hashemi, RIHT advisor and Ryerson engineering prof, said the team has about $250,000 in funding from Ryerson and its nearly-20 sponsors.

He said every member of the team “devoted their life” to their project.

“It does take time, right? But when you want something, you’re going to put everything into it,” Shonibare said.