Being charged with murder would probably have ruined my weekend.

At least, that was part of the thought process that kept me in my seat on the bus ride to Ottawa. I was on my way to the nation’s capital with fellow Eyeopener reporter Bryan Meler. Our mission: report on history in the making—or not—as the Rams men’s basketball team aimed for its second straight Wilson Cup at the Ontario University Athletics (OUA) Final Four.

Bryan and I arrive at the bus station at Bay and Edward streets after rendezvousing at The Eye office with 20 minutes to spare. We people-watch as we wait for the attendant to start hollering out ticket numbers. A pity we don’t people-listen.

I learn far more about the flat-faced, big-nosed baldie than I would have liked, and based on the dirty looks the rest of the passengers are giving him, I’m not the only one feeling this way. He finally stops shouting his life story with about an hour left to go. He devotes that time to showing his new friends his favourite rap tracks—using one of their phones at full volume and without headphones, naturally—and to practice his truly terrible freestyling for the benefit of the entire bus.

We can’t believe we’ve actually survived the trip as we emerge from our God-forsaken-torture-chamber-on-wheels at Ottawa Central Station. Google Maps tells me that the bed and breakfast I found for us on Hotels.com is right around the corner, which isn’t exactly promising news as we walk through the shabby-looking neighbourhood. Our suspicions are confirmed when we get to the door adorned by a printer-paper-and-sharpie sign that provides the number to call if no one answers and you don’t have the clairvoyance to guess the pin for the number pad.

The owner answers, and checks us in on his ancient desktop while we stand clutching our backpacks and camera cases in the cramped front hall of his eight-room business. He gives us a $20 discount as he explains that we won’t have the private bathroom advertised on the site. When we unlock room number seven, it’s hard not to laugh.

I don’t realize just how intimate our dubious accommodations are until I nearly knock over the desk chair, squeezing past it get to my side of the bed. It’s the kind of room that makes you check the mattress for bed bugs. The search is fruitless, though we do come across a few questionable stains. 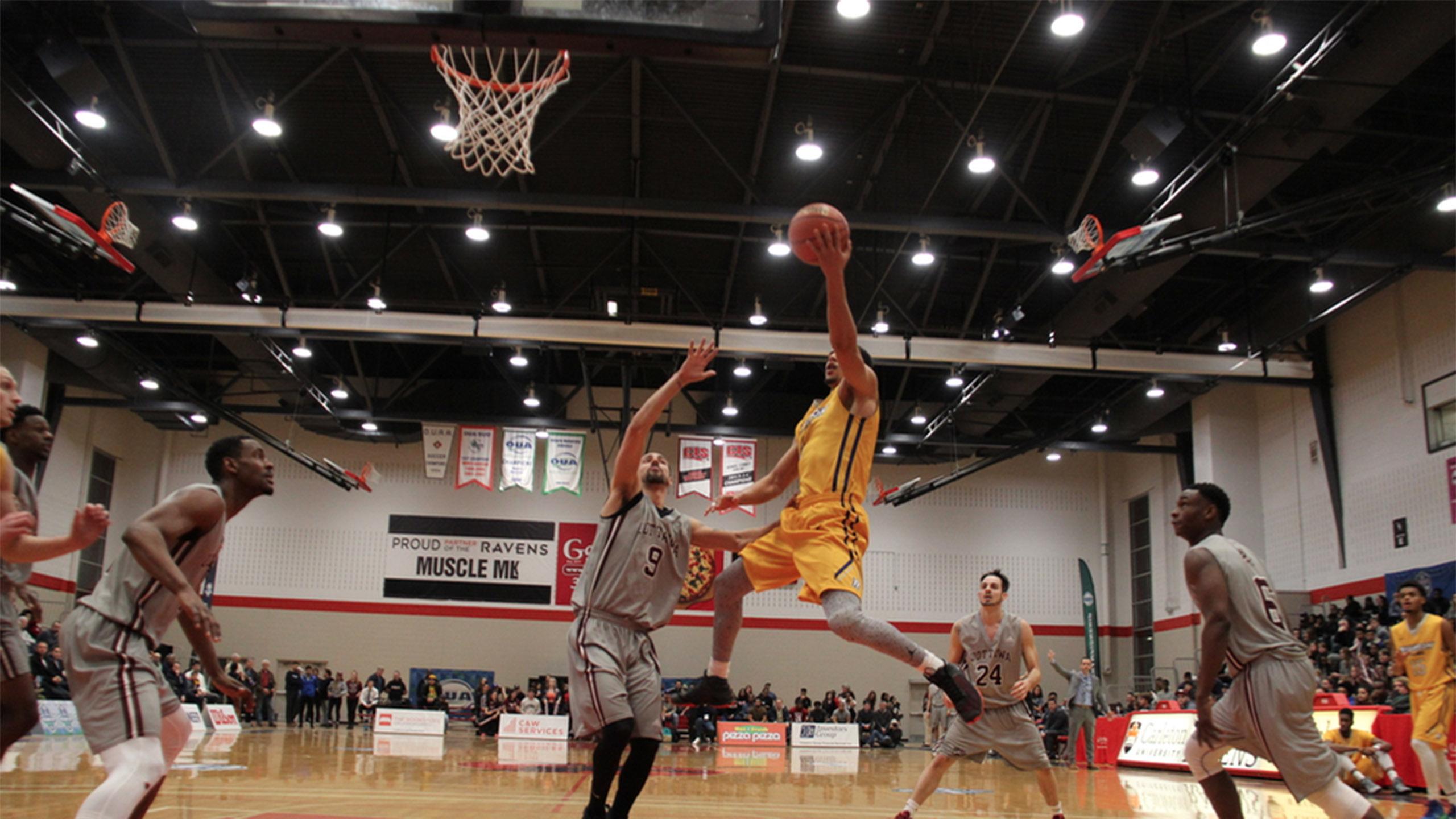 March 3: the Rams against the Gee-Gees in the Nest. Photo: Bryan Meler

After our Uber drops us off in front of Carleton’s physical recreation centre and we track down the media handler who has our press passes, we step into Carleton’s home court for the first time. As the Ravens put the screws to the Brock Badgers in the first semifinal game, I feel a smile spreading across my face. I’ve seen a few enthusiastic crowds at Ryerson home games in four years covering the Rams, but this is something else entirely. Drumlines, noisemakers, banners, cheerleaders, facepaint, free-flowing booze and a deafening sea of red-and black-clad fans. This, surely, is how university sports are meant to be played. Bryan is already snapping pictures. 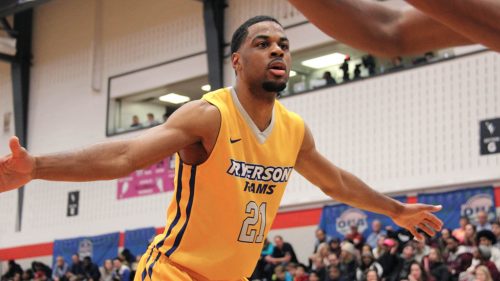 Adika Peter-McNeilly, the Rams star of the game against Ottawa. Photo: Bryan Meler

The Rams have just beaten the Ottawa Gee-Gees in a ridiculous 76-75 semifinal game. Bryan and I can’t believe what we’ve just seen. With Ottawa up by seven points in the fourth quarter and clearly carrying the momentum, a Ryerson loss had seemed probable. But the Rams had stormed back to earn a spot in the championship game. We’re scrambling to file a quick hit, trying to beat our rival, the Ryersonian,  and Ryerson athletics. As I work my way through the post-game madness looking for Rams to interview, I bump into the two reporters the Ryersonian sent for the weekend. We decide to do a media scrum instead of talking to players separately, temporarily teaming up to make the interview process quicker. As we pack up our cameras afterwards, I spot Bryan typing frantically at his laptop in the broadcast booth overlooking the court that I had left a few minutes later. I occupy the Ryersonian team with a chat about the game and the weekend, comparing our responsibilities and accommodations. I make sure Bryan has already submitted his first article before I end the conversation and let them get back to work. Not all games are played between the whistles.

“You wanna get a beer, bro?” Bryan asks me as we sit working in our tiny room. He’s lying on the bed writing his game story while I sit at the miniscule desk editing the highlights video. I glance at the clock. Tomorrow is the championship game, we have to be out of our room by 11 a.m., our respective projects have to be published by dawn, and neither one of us is as close to done as we say we are. “Sure,” I answer, shutting my laptop.

As the closest bar still serving alcohol, the Berryman Pub checked all our boxes. After a day of Greyhound assholes and frantic game coverage, that first sip of Moosehead brings tears to our eyes. Our conversation begins at sports, winding its way through our backgrounds before arriving at global politics and the caricature running the White House.

It’s at this point that Jay joins the conversation. Half-Irish, half-French, all Canadian and entirely hammered, he spends the next hour ignoring his annoyed-looking friend sitting to his left and helps us solve the world’s problems. By the time we leave, the three of us have deconstructed capitalism, money and human nature.

There’s still plenty to do when we get back, so we do the sensible thing and stop in at a pizza joint five minutes from our b&b. Our pepperoni, bacon, green pepper and tomato-wearing new best friend gets us through most of our remaining work. Bryan heads to bed around 6:30 a.m. and I follow an hour later. Less than two hours pass and we’re up and back at it, putting the finishing touches on our projects before checking out. Efficient? Maybe not. But beer makes everything better, and pizza makes everything perfect.

After checking out of Icky Inn, we begin championship day in true Canadian fashion: a trip to Tim Hortons and The Beer Store adjacent to it (It’s a long bus ride home, and we need to be prepared for more assholes). We make our way to the Rideau residence of the University of Ottawa, where Bryan has an old friend studying engineering. While his friend writes a midterm, we squeeze in a much-needed power nap before heading to Carleton to watch the Rams play the Ravens for the title.

The Ravens enter the game undefeated. The Rams are defending Wilson Cup champs, but Carleton has won the last six national titles, and Ryerson hasn’t won at the Nest since 2000. It’s a close game, but it seems like it will go Carleton’s way in the end. Until the dunk. 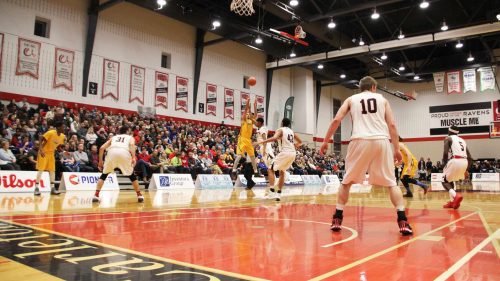 The Rams against Carleton on March 4. Photo: Bryan Meler

With four minutes to play and the Rams up by one, Ryerson all-star Adika Peter-McNeilly delivers one of biggest jams I’ve ever seen as a Ravens player makes contact with his head and sends him crashing into the spectators under the net. Busy filming the action, I don’t notice that the photographer who took the brunt of the collision is Bryan.

The play permanently turns momentum Ryerson’s way. Within a few minutes, the Rams have ruined the Ravens’ perfect season, snapped their losing skid at Carleton and won Ryerson’s first back-to-back OUA titles. The Carleton crowd abandons the gym quickly after the final buzzer, leaving the visiting Rams and their fans that made the trip—mostly family and other Ryerson athletes—to enjoy an exclusive celebration on the home team’s court. My post-game routine is a blur as I force euphoric Rams to answer a few questions for the camera, tripping over my words as I fail to contain my own excitement. As Bryan and I sit working on our recaps of the night, he shows me his pictures of the dunk. “I almost got killed shooting this,” he tells me gleefully.

Exhausted, Bryan and I stand in line for our 1 a.m. bus back to Toronto. It’s quiet, and we exchange a relieved smile. It’s been a long weekend, and we won’t have to listen to any freestyling on the way home.