A poor showing on the second day of the U Sports/Curling Canada University Championships left the Rams near the bottom of the table, realistically needing at least one result to go their way on day three to have any chance of making the playoffs.

They didn’t get the result in their first game, putting even more pressure on an already-critical second game. But the Rams turned that pressure into arguably their best game of the season, coming up with a huge win and keeping themselves in the thick of a crowded playoff hunt.

The Rams fell to the University of New Brunswick Varsity Reds by a score of 9-5 after nine ends in their afternoon. Sitting at 1-3 and facing a familiar foe in the Laurentian Voyageurs, the Rams made a change in their playing style and were rewarded handsomely, winning 12-4 in just eight ends. With only the Alberta Pandas emerging from the field so far, the 2-3 Rams have a chance to sneak into one of the three playoff spots that will be up for grabs during the final day of the round robin on Tuesday.

The Rams started their afternoon game against the UNB Varsity Reds playing brilliant defence without hammer. Two consecutive hit-and-roll outs from Rams vice Nicole Titkai kept the rocks in play to a minimum ahead of skip stones in the first end. Rams skip Maggie Macintosh made a good hit-and-roll of her own to force Reds skip Justine Comeau to hit and roll out to blank the end, but Comeau’s shooter stayed in place to score a single point.

With last shot in the second end, the Rams did well to put up a corner guard on the right side of the sheet and draw behind it multiple times. A straightforward hit and stick from Macintosh gave the Rams their two, and more good hitting from Titkai and Macintosh forced the Reds to throw their last rock away to blank the third end. 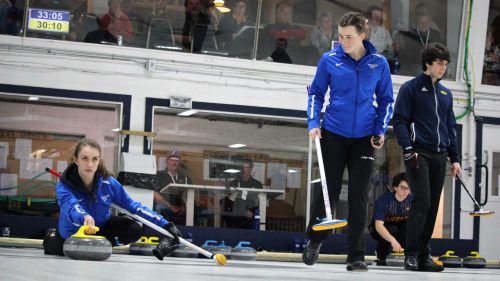 The Rams started struggling with their line calls in the fourth end. Lead Teagan Walton overcurled on a takeout with her second stone, accidentally removing her first stone from play, while Titkai was unable to get the right angle on a short double peel. A light draw attempt from Macintosh on her last rock allowed the Reds to draw a third stone in, landing it on the edge of the pin to score a big three points. With more rocks in play in the fifth end, the Rams fell behind early and needed a long runback takeout from Macintosh to rescue the end, but Macintosh was inside on her delivery, allowing the Reds to steal a point and take a 5-2 lead into the break.

The Rams seemed to come out strong following the break. Two good shots from Walton, and a precise control weight takeout behind cover from Titkai put the Rams in position to score multiple points. A Reds miss left Macintosh an open hit and stick to score three, but this time her rock didn’t curl enough. Macintosh made the hit but her shooter rolled out, giving the Rams just two points in the end.

The game was put to bed in the seventh end, when a heavy draw attempt from Walton, as well as a missed takeout from Rams second Audrey Wallbank, left the Rams chasing entering back-end stones. Macintosh nearly had a long angle double takeout with her first rock that would have cut down the damage, but was unlucky to only get one rock out. Needing a freeze in the four foot with her last, Macintosh was outside and about a foot too heavy with her second. The Reds would draw for three more points, and after exchanging single points in ends 8 and 9, the Rams elected to shake hands and concede the 9-5 loss.

The loss dropped the Rams to 1-3, but the team remained optimistic, knowing they had thrived the last time they held that record.

“Right now it’s pretty much a a win to stay alive mentality, but this is the same position we were in at OUAs,” Titkai said. The Rams started the 2017 OUA Championship 1-3, but won their final three round robin games to get the final playoff spot in their pool. Two playoff wins that followed punched their ticket to the national championship.

“We all know now we can do it… luck was on our side [at OUAs], so hopefully we can pocket a bit more of that,” Titkai said.

Saying the Rams were able to pocket more luck ahead of their evening game against the Laurentian Voyageurs would be an understatement. The entire team played as if every pouch on their person was overflowing with horseshoes.

The Rams went into the game at 1-3, needing to reverse their fortunes against a Voyageurs side that twice had their number at the OUA Championship. The Voyageurs beat the Rams 8-2 early in the round robin, and took down the Rams a second time in a much closer 6-4 championship final. Multiple Rams said before the game that the Voyageurs, who entered the game at 3-1, were a strong hitting side. To combat this, the Rams planned on trying to get lots of rocks in play and forcing the Voyageurs to draw for their points. 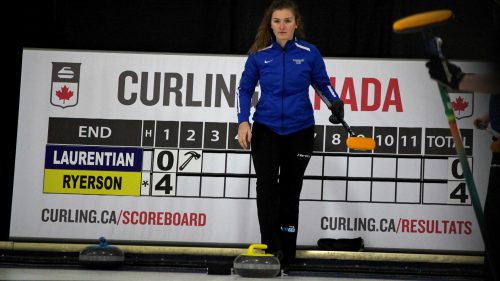 It was a strategy very different from what the Rams had employed in their previous four games, but in game number five, the change worked wonders.

With hammer in the first end, the Rams placed multiple shots in the middle of the sheet, and a brilliant runback from Titkai to sit in scoring position behind lots of cover proved to be vital. Voyageurs skip Krysta Burns was unable to find her draw weight, throwing a few feet heavy and allowing Macintosh to make a draw of her own to score four.

The Rams continued their strong play in the second end, making multiple peels to limit Voyageurs scoring opportunities. A difficult runback double takeout miss from Macintosh was the small break the Voyageurs needed to get their two and stay in the game. With hammer again in the third end, the Rams tried once again to clog the middle of the ice, but heavy draws from Titkai prevented the Rams from scoring multiple points. Not wanting to risk missing and giving up a steal, Macintosh threw away her final stone of the end to settle for a single point.

The fourth end vaulted to Rams to an even bigger lead. Playing without hammer and falling behind after some misses from their front, the Rams were able to get two Titkai draws sitting side by side on the left side of the house. Two missed hits from the Voyageurs – one from Burns, the other from vice Megan Smith – cost the Voyageurs a steal of two. The Rams would give up a single to the Voyageurs in End 5, but still went into the fifth end break up 7-3 and with hammer in End 6.

An outstanding pinball shot from Wallbank that was a 2-in-1 peel and tapback corner freeze set the Rams up nicely in the sixth end. But a communication breakdown on sweeping Macintosh’s first rock, an intended draw to the top of the house, landed the rock just behind the button and gifting Burns a draw with backing to ultimately steal a point.

The Rams would do just fine cleaning things up in the seventh end. Good draws from Walton and Wallbank, and another lovely shot from Titkai – this one a hit-and-roll to break up two Voyageurs stones – put the Rams in position to strike. Macintosh sealed the deal with a wonderful control weight hit that got behind cover to remove a Voyageurs stone, but which stuck around to score two.

After Walton threw her two stones away in the eighth end, exceptional back-to-back double peels from Wallbank set the Rams up brilliantly to force a Voyageur single. The Rams would end up sitting three and forcing Burns into a draw to the four foot for a single point, but once again Burns’ draw was heavy, giving the Rams a big steal of three to put an exclamation point on a dominant performance.

The 12-4 win over the Voyageurs in just eight ends bumped the Rams up to join three other teams with a 2-3 record. With the exception of 5-0 Alberta, parity has wreaked havoc on all teams in the round robin, setting up a thrilling final day of action. Alberta is the only team that has clinched one of the four playoff berths up for grabs, and every other team is still mathematically alive.

“It would be amazing to make playoffs on Wednesday,” Walton said following the game. “I love sports and I’m a pretty competitive person, so they’re in the back of my mind.”

Walton, whose play noticeably improved in the last two games, “found my rhythm when I was sliding,” and like her teammates did well to stay focused even after jumping out to a big lead early against Laurentian. On a final day where the Rams could be tempted into scoreboard watching, Walton and her teammates know where their focus needs to lie to thrive.

“I don’t really want to think about (playoffs),” Macintosh said following the win, a game in which she curled at a brilliant 88 per cent. “I don’t want that to be my goal, because that’s where the pressure comes in,” she said.

“If you think that far ahead,” Walton said “you’re going to let something slip.”

“We need to get through our next two games first, and play our best in those two games.”

The Ryerson Rams close out the round robin of the U Sports/Curling Canada University Championship against the 1-4 Regina Cougars in the afternoon, followed by the 2-3 Dalhousie Tigers in the evening. The Rams will need at least one win to have a chance at a top four finish and playoff qualification.

The Eyeopener will have all of your coverage of the Rams throughout the tournament.