In a round robin that—with the exception of the undefeated Alberta Pandas—was rife with parity, the Ryerson Rams women’s curling team entered the final two draws at the U Sports/Curling Canada University Championships needing to emerge from the pack. Sitting at 2-3 and in a seven-way fight for three remaining playoff spots, the Rams needed at least one win and some good fortune from other games to lock down a playoff berth.

Coming off a stunning 12-4 win against the Laurentian Voyageurs–the team they lost to in the OUA Championship final and the eventual national champs—the Rams had momentum but were still in search of game-over-game consistency.

That consistency and strong performance from the night before couldn’t be rediscovered. The Rams dropped two close contests that didn’t end until the final shot: a 7-6 loss to the Regina Cougars, followed by an 8-7 loss to the Dalhousie Tigers. At 2-5, the Rams finished tied for last in the eight-team tournament, but as a team were more competitive than their record indicated.

The Rams has adjusted their style of play by putting more rocks in play and forcing the opposition to draw rather than hit in their win against the Voyageurs. The team seemed to go back to their more regular style of limiting rocks in play early in their game against the Regina Cougars, and it appeared an effective strategy early on. 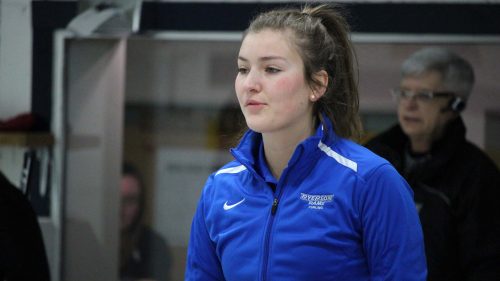 After Rams second Audrey Wallbank and vice Nicole Titkai each took out a Cougars rock, Titkai made a nice draw to the four foot behind cover with her second shot. Two more good draws from Rams skip Maggie Macintosh would force the Cougars to just one point with last shot. In the second end, a draw to the left side split the house for the Rams and put them in position to score two.  Macintosh was nearly heavy with her final shot, landing her draw in the back eight foot, but still managed to score two points.

The Rams fell behind in the third end, leaving the Cougars with their own split of the house. Neither Titkai nor Macintosh were able to clear the danger, and the Rams fell into a 3-2 deficit. With hammer in the fourth end, the Rams still appeared to be chasing and had to rely on a hit-and-stick from Macintosh’s last stone to score a single point to tie the game. Still chasing in the fifth end, the Rams’ hitting game started to sputter. A hit-and-stick attempt from Wallbank rolled out of the house, while both of Titkai’s hit attempts didn’t have the right line and left Macintosh having to shoot to save the end. Macintosh did well on her two hits to limit the damage, but the Cougars still managed to get their two and take a 5-3 lead into the break.

Needing to keep pace and score two in the sixth end, the Rams started having trouble with their draw weight. Every Rams player but Macintosh came up either light or heavy on at least one draw or guard attempt in the end, and after Macintosh’s first stone was hit out, she was forced to draw for a single point.

The Rams did better matching the Cougars in the seventh end to force a blank, but once again could not prevent a double score in End 8. Both Wallbank and Titkai were light on draw behind attempts, but the Cougars were able to find the right weight and score another pair.

Needing to mount a quick comeback, the Rams nearly gave themselves life in the ninth end when Macintosh outdrew Cougars skip Haylee Jameson with her first rock (and Jameson’s second). Left with a hit for two, Macintosh made contact but rolled a short distance away, forcing an official measure to determine which team had second shot. The Rams lost the measure to only score a single, and were only able to steal one of a required two points to tie the game in the tenth end.

With the 7-6 loss in the afternoon, the Rams were all but mathematically eliminated from playoff contention. Sitting at 2-4 ahead of their final round robin game against the Dalhousie Tigers, the team wanted to take mental pressure off of their shoulders and try to finish on a high note. 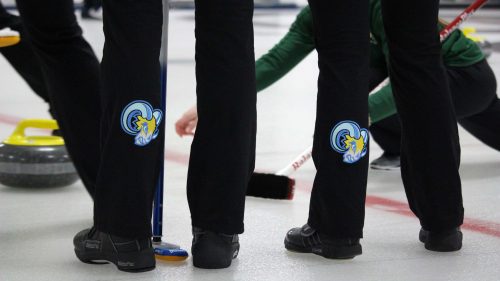 “(A win against Dalhousie) would be good on all of us, but honestly we’re just here to have fun,” Macintosh said before the evening draw. “We know we proved people wrong by just being here and doing our thing, we’re just savouring the moment… I don’t even want to think about what the end results are.

The first end was among the fastest that the Rams played in the tournament. Playing with hammer, the Rams faced strong Tigers hitting and were unable to set up a multiple score, forcing Macintosh to throw away her final stone to blank the end. The Rams fell behind in the second end, at one point facing three Dalhousie stones in scoring position. Macintosh needed to hit and stick to salvage a point, but her rock rolled away slightly to give the Tigers a stolen point and a 1-0 lead after two ends.

In nearly identical fashion to the previous end, the Rams again found themselves chasing the game and faced with three Tigers stones in scoring position. For the second straight end, Macintosh attempted a hit and stick to rescue a single point for the Rams, and for the second straight end her rock rolled just far enough away to give the Tigers a stolen point.

The Rams needed to come back in the fourth end and managed to do. Two good hits from Titkai, followed by two good hits from Macintosh, turned the Rams fortunes around to get a big score of four points to go up 4-2 after four. The Rams lead didn’t last long though. The fifth end started well with alternate Corrina Serda – subbing in at lead to get her first game action of the tournament – and Wallbank setting the Rams up with rocks in the house behind cover. Titkai and Macintosh struggled to draw behind that cover to preserve the strong defense though, allowing Tigers skip Kristin Clarke to draw for two to tie the game at the halfway point.

The Rams back end of Titkai and Macintosh would rebound marvellously in the sixth end. Titkai’s first shot, a draw weight tap of her own stone in the house, was an interesting call, but she made contact at just the right angle to roll her shooter and split the house. After drawing another rock in with her second, Macintosh made a lovely control-weight takeout behind cover with her last shot of the end, sticking the shooter this time to score a big three points. The lead was nullified the following end. Macintosh’s hit attempt with her final stone was inside right out of her hand, leaving Serda and Wallbank a difficult sweep to hold the line. The shot made the hit but rolled out, allowing Clarke a straightforward draw for three points of her own to tie the game 7-7 after seven ends.

A missed tapback attempt for two from Macintosh in the eighth end only gave the Rams a single, but once again the Tigers would match the Rams the following end. The Tigers were forced to draw for just a single point after two good takeouts from Macintosh, tying the game at eight heading into the final end.

The thrilling back-and-forth affair would end up coming down to the final skip stones. After Serda made two very nice draws along the centre line, the Tigers did well to match her draws and sit shot stone on the back edge of the four foot. Wallbank was able to peel away two guards, leaving the centre of the ice open—an ideal situation for the Rams, who had hammer and wanted to leave the ice open in case they got into trouble. The Tigers would continue to put up guards for Titkai and Macintosh to hit away, ultimately leaving Macintosh with a draw behind cover needing a piece of the four foot to win. Her shot got past Clarke’s guard, but didn’t manage to slow down in time, giving the Tigers the steal of one and a 9-8 victory. 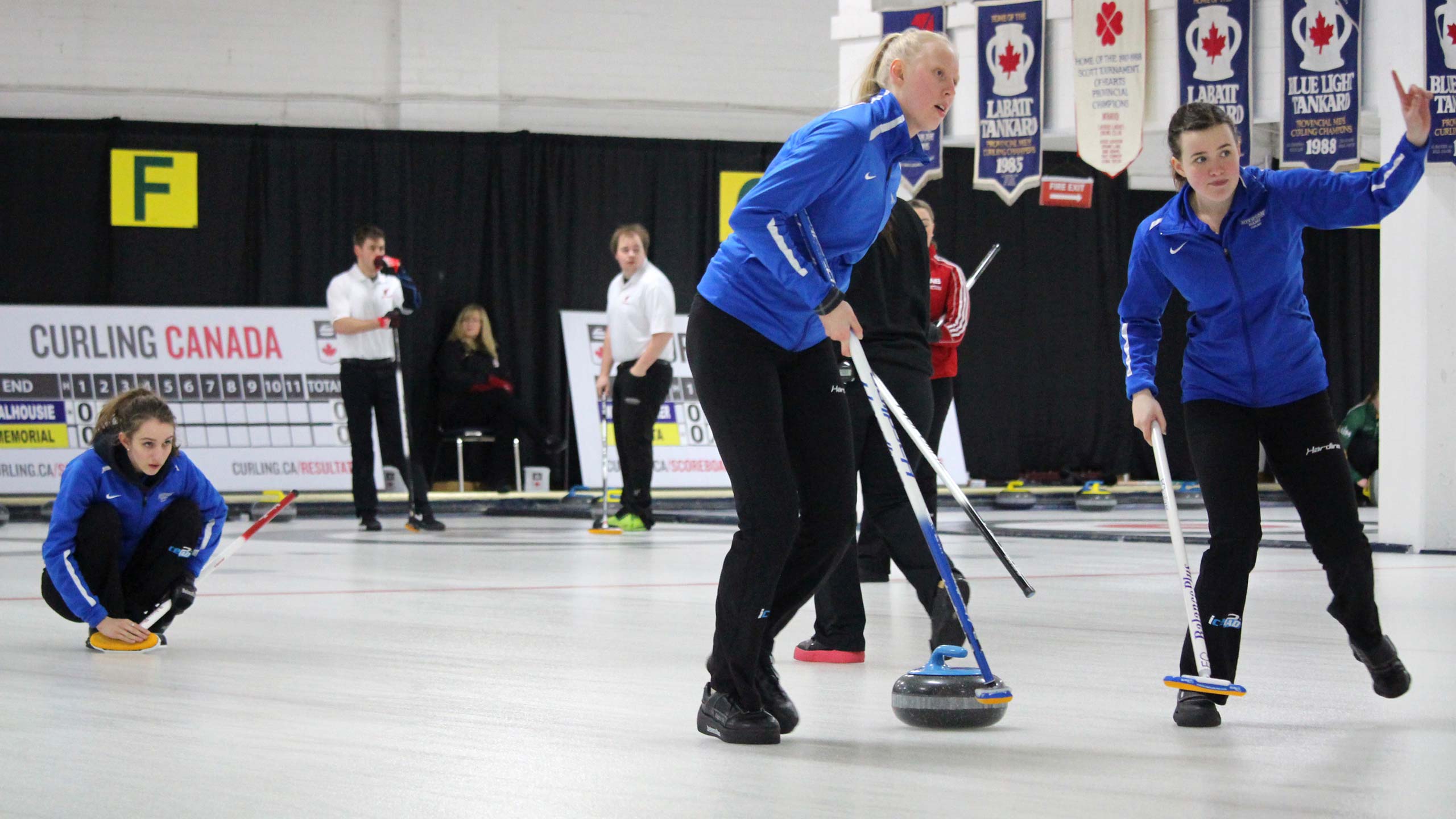 The Rams finished the tournament at 2-5, but considering how evenly matched the round robin was—the host Lakehead Thunderwolves, who finished with a 3-4 record, managed to grab the fourth and final playoff spot on a tiebreaker—the Rams could have easily ended up at 4-3 had a few more shots gone their way.

The Thunderwolves continued the tournament’s string of parity in the playoffs, knocking off the previously-unbeaten University of Alberta Pandas in the semifinal. The Thunderwolves would be defeated by the Laurentian Voyageurs by a score of 7-4 in the championship final.

Even though the Rams missed the playoffs, earning the right to compete in the national championship should be seen as a huge accomplishment for the Rams curling program. In just their second season of existence, the Rams held their own against far more established programs on multiple occasions, while the provincial silver medal that got them to the national tournament drew attention from teams across the province.

“The ladies played so very well this year,” Rams head coach Perry Marshall said in a message after the tournament. “We (hope) that in some small way their play… helps to raise the profile of our sport within the school and within the curling community at large,” he said. “Now on to next year with great hope that we can take more small steps forward for the program.”