Ryerson’s women’s curling team made history last night by becoming the first rink to represent the school at a national championship.

The ladies looked far from being tournament newcomers, though. The Rams got off to a quick lead and never looked back en route to an 8-3 victory over the St. Francis Xavier X-Women in their first game at the 2017 U Sports/Curling Canada University Championships.

The Rams started the game with hammer in the first end, and every player did well with their takeouts to limit X-Women rocks in play. X-Women skip Emma Logan missed a takeout on the right side of the house with her first shot, allowing Rams skip Maggie Macintosh to draw and split the house and ultimately score a huge three points. More good hitting, especially from vice Nicole Titkai, helped propel the Rams to a steal of one in the second end to take an early 4-0 lead. 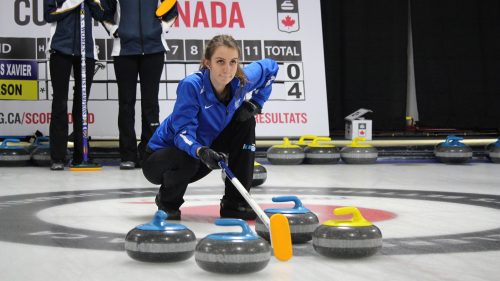 In the third end the Rams started to show some cracks, as missed hits from both Titkai and second Audrey Wallbank allowed the X-Women to get a rock behind guards in scoring position. Macintosh did well to make a short raise takeout to limit the X-Women to a single point, but the Rams would find themselves limited to just a single point of their own with hammer the following end.

After a shaky start to the sixth end which saw the X-Women sitting three at one point, the Rams rebounded with good takeouts from Titkai and Macintosh to blank the hand and keep last shot advantage. The Rams were able to split the house at one point and seemed to be in position to capitalize on hammer in the seventh end, but a good draw to the right side of the house from Logan forced Macintosh into a difficult hit for two. Macintosh’s shot overcurled, causing the X-Women rock to jam onto a Rams rock and stay in play, limiting the Rams to another single.

The game was put out of reach in the eighth end when on her last stone, Logan’s rock overcurled, hitting one of multiple Rams rocks around the four-foot circle but not catching enough of the rock for her own rock to stay in place. The Rams stole two, and after the X-Women were forced to just one point with hammer in the ninth end, the Atlantic University Sport (AUS) champions elected to shake hands.

Macintosh said that the Rams entered the game relaxed and ready following extensive practice earlier in the day, which helped them get off to their strong start. 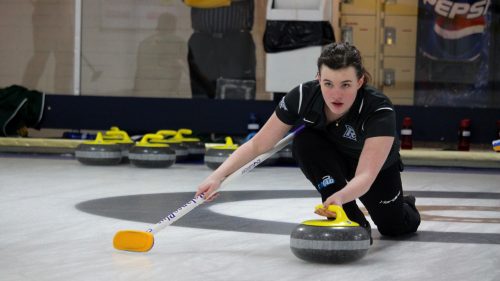 “It’s been a heavy rock day, so we definitely got a feel for the ice,” Macintosh said. By Macintosh’s estimates, she had thrown 100 rocks in practices earlier that day, while her teammates each threw around 80. She said the ice, which today ran fast and had a fair amount of curl was “right up our alley,” and similar to the ice the Rams played on at the OUA Championship in Oshawa last month.

Macintosh said the team did well to take advantage of the X-Women’s struggles shooting near the side edges of the ice, but said more consistency will be needed with their lead rocks as the competition continues. Lead Teagan Walton struggled finding her draw weight and finished the game shooting 67 per cent, the lowest total of the Rams rink.

“The lead rocks are so vital, they’re just as vital as the skip’s rocks,” Macintosh said, calling the position the most underrated in the game. “We definitely need to make sure we’re getting … those shots there, getting those guards up.”

The Rams continue round robin play on Sunday, facing off against the University of Alberta Pandas at 2 p.m., followed by an evening draw against the host Lakehead Thunderwolves at 7 p.m. The Eyeopener will have all your coverage of the Rams throughout the tournament.