Ryerson security is investigating an alleged sexual assault after an anonymous Facebook post was made that described the incident.

The post was written by an unnamed person who says they are a Ryerson student. They wrote that the incident occurred on April 28 in Kerr Hall West (KHW) while they were studying and that a Ryerson security staff member laughed at them when they reported it.

“[At] about 4 am near the gym in KHW I was thrown onto the ground and two guys got on top of me. One covered my face with my shirt and hit me a few times,” the post reads. “After a while I picked myself up, went to KHS (where my locker was) and put on my gym clothes then went back to studying. I went to Ryerson Security staff after my exam and one guy just laughed at me. Said I was making it up, to excuse my ‘badly done exam.'”

According to an email from Ryerson’s public affairs office and Integrated Risk Management, Ryerson security is currently unable to release information regarding specifics of the investigation. “We are very concerned by this Facebook post and take the matter very seriously. The safety and security of our students is a top priority,” the email read.

The post was published on the Ryerson Confessions Facebook page—a public forum that encourages students to submit their confessions anonymously that pertain to Ryerson. The submissions are then published by the page’s administrators.

The comment reads “Ryerson University is taking this matter very seriously. Please let us know if it would be helpful to have someone from the university meet with you.” 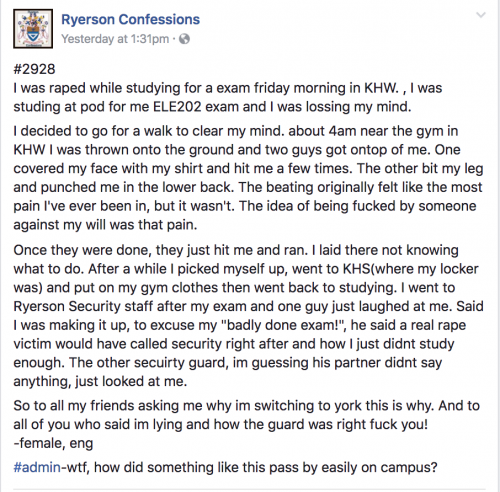