A motion regarding the Ryerson Students’ Union’s (RSU) “Colonialism 150” campaign has sparked heated discussion about the RSU executive’s teamwork and cohesion.

Brought forward and ultimately withdrawn by RSU vice-president student life & events Lauren Emberson, the motion would require all media statements about the RSU’s “Colonialism 150” campaign to be approved by either the executives or board members before being released. This motion will be voted on at the July board meeting.

On June 26, a statement titled “Countdown to Colonialism 150” was posted to the RSU’s Facebook page. The post stated that Indigenous peoples have been on this land for much longer than 150 years and that Canada 150 “means we are celebrating 150 years of colonization.”

“Moving into this week please be critical of what you are celebrating—or please don’t celebrate at all,” the statement read.

The post has been shared more than 1,000 times and there are over 300 comments. Some students also began giving one-star ratings on the RSU’s Facebook page. 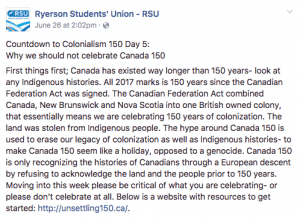 Emberson says political stances should be approved by the board of directors.

“This is our knowledge, there is no need for authority, this is my people’s way of living. Anything that challenges it, just speaks to people who think they have power to challenge. The challenging is racist,” said Phyllis McKenna, who is Anishnawbe and the Continuing Education Students’ Association of Ryerson (CESAR) vice-president equity & campaigns.

The motion was initially ruled out of order because RSU vice-president equity Camryn Harlick—who wrote the post with consultation from Indigenous students—has final say on the RSU’s equity platforms and there is no bylaw that states their actions have to be approved by the board.

RSU president Susanne Nyaga said the motion to have Harlick’s statements and equity positions approved would be “policing content.”

Nyaga also mentioned that the executive team present at the meeting, not including vice-president education Daniel Lis, initially voted in favour of the campaign, but that vice-president operations Ali Yousaf now wanted to reconsider his stance even though a revote wasn’t called.

Nyaga then said the meeting to discuss this motion was called with the knowledge that Harlick would not be available to attend, though Yousaf said that’s not the case.

Nyaga has proposed an amendment to the amendment. She wants the word “approved” to be changed to “discussed.”

“There is a lot of racist stuff there. I don’t think we’re all in favour of this campaign because we’re not challenging those things,” said RSU equity & campaigns organizer Corey Scott at the meeting.

“You’re a team. you’re supposed to support each other and help each other out,” said CESAR president Francis Pineda.

After the meeting was moved in-camera to decide on how the RSU should respond to upset comments and messages, McKenna walked out and said, “Happy Canada 150, motherfuckers.”

Also at the meeting, the RSU updated their definition of anti-Semitism in their student group, course union and affiliate handbooks after consultations with Jewish students at Ryerson.

There was also a motion brought forward by Emberson to not purchase items or give funds not related to membership fees to the Canadian Federation of Students, which is the largest national student-lobby group that the RSU pays an annual membership fee. This motion was also moved to the next board meeting to allow it to be discussed by the entire board.