Marko Miketic put on a showcase during the Ryerson Rams’ opening weekend, propelling the men’s soccer team to a pair of wins after missing all of last season.

The Rams were able to beat the Nipissing Lakers 4-0 on Sunday at Downsview Park, behind a goal and a pair of assists from Miketic. It was a perfect follow-up performance after he scored Saturday as Ryerson beat the Laurentian Voyageurs 3-0.

“It doesn’t matter who scores, or who does what. I’m just so happy that we’re all on the same page,” said Miketic following Sunday’s game. “It’s an honour to be back out here, playing with my team.”

Miketic, who is entering his final academic year at Ryerson, decided to take a year off last season for personal reasons – missing the Rams’ historic 2016 campaign.

Missing for the Rams this opening weekend was All-Canadian Raheem Rose, who is playing for Team Canada at the 2017 Summer Universiade, and goaltender Praveen Ahilan, who is making his way back from injury. 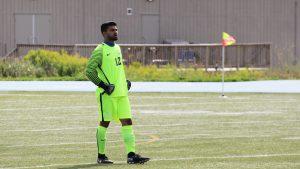 Ali Ghazanfari filled in for Ahilan this weekend. Even though he said it’s been “nerve racking”, Ghazanfari was able to secure a pair of clean sheets for the Rams.

“I truly believe we have the best one-one punch, I call it, in the country for goalkeepers,” said Rams head coach Filip Prostran while speaking on Ghazanfari’s impact. “They could both be All-Canadians if they played every game.”

Unlike on Saturday, when the Rams didn’t score their first goal until the second half, they were able to come out firing from the gate on Sunday.

Prostran encouraged his team to deliver the “first punch” and they sure did. 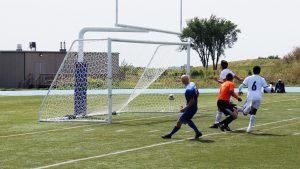 MARKO MIKETIC CHIPS IN A GOAL PAST THE LAKERS

Miketic scored the game’s opening goal at the 10-minute mark, then followed it up with an assist to Ahmed Zabian five minutes later. By the end of the first half, it was 3-0, thanks to an unassisted goal from Andrew Dias.

The Lakers were in too big of a hole to start the second half, but still came out a hungry squad. They took advantage of a defensive switch from the Rams, but not enough to produce any goals.

“Our defence keeps us going and it’s something we can rely on,” said Ghazanfari while talking about his clean sheet. “Doesn’t matter who’s back there for us.”

Nipissing’s pressure almost neutralized the Rams in the second 45, until Miketic decided to let out a final piece of magic in the game’s final minute.

“[Marko] seems to be in a good place right now,” said Prostran.

The five-foot-11 midfielder was able to find Matthew Isabella with a cross inside the box that would be the final nail in the Lakers’ coffin.

After finishing last season with a program best 14-1-1 record the Rams are on track to up themselves, finishing the weekend 2-0-0.

UP NEXT: Ryerson will get ready to play the Trent University Excaliber on Friday at Justin Chiu Stadium, as coach Prostran waits to see if he’ll have Rose back in the Rams’ lineup for their 6:00 p.m. ET start time.