The Ryerson Rams women’s soccer team finished their season’s opening weekend with a 1-1 tie against the Nipissing Lakers.

Playing on their home turf at Downsview Park, they were able to get out to an early lead Sunday thanks to a goal by Alex Rodkin. But a foul from Rams’ rookie Savahnna Robinson in the penalty box gave the Lakers a chance to tie up the score and finish the day with a point.

After beating the Laurentian Voyageurs 1-0 on Saturday, the Rams couldn’t produce the same result against Nipissing, who lost their opening game of the season a day earlier.

“Laurentian is a bit of a stronger team, so I think we were playing down to [Nipissing’s] level today,” said Rodkin after Sunday’s tie.

“We should have won.”

The Rams forced a lot of their opportunities down the middle, often over passing to an aggressive Lakers goaltender in Jess Moran, who took to the ground to stop anything that came near her line.

The Rams were able to break the ice when they moved their action to the wing. Rodkin scored the Rams first goal at the 24th minute mark. Victoria Watson provided her with a cross, that Rodkin was able to header into the back of the net to put Ryerson up 1-0. 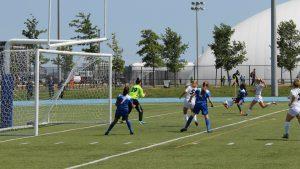 The Lakers wouldn’t fold, upping their pace by pushing the ball with their own wings. They would receive a break when Robinson tackled Erika Brennan just inside the Rams’ box. Delaney Borsato would put away the penalty kick with ease to tie the score at 1-1 in the 39th minute.

“[Robinson] gave a clean tackle,” said Rodkin while speaking on the penalty. “I can’t believe the ref called it.” 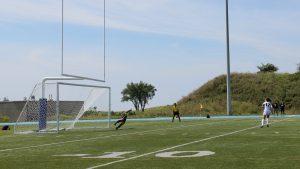 Delaney Borsato delivers a penalty kick for the Lakers

The Rams and Lakers wouldn’t produce any more goals, finishing with only a combined 11 total shots, as they both increased their level of physicality in the second half.

Just like last season, when the Lakers finished one seed ahead of the Rams in the OUA East, they seemed evenly matched. It’s a good sign for a young Rams squad that’s currently incorporating six rookies into their lineup.

“Four points is a solid start,” said Rams’ assistant coach Tina Cook. “I think with the young team that we have, being able to do that right off the bat, remain undefeated, is good and bodes well for the future.”

UP NEXT: After starting the season 1-0-1, the Rams will hit the road to take on the Carleton University Ravens on Friday at MNP Park with the kick off scheduled for 1 p.m.