Picture this: a carpet of magazines, shelves bending beneath the weight of their contents, and towers of junk grazing the ceiling, hidden behind windows plastered with outdated newspapers. This is one of several scenes in Hanna McCabe-Bennet’s virtual reality hoarding simulator.

McCabe-Bennet, who is a third year PhD student in the clinical psychology program at Ryerson, is using virtual reality (VR) to study hoarding by using an Oculus Rift head mounted display to investigate cognitive and emotional aspects of hoarding behaviour.

Through a series of exercises, McCabe-Bennet claims she can investigate the extent and behavioural patterns of hoarding in a uniquely controlled and  “ecologically intelligent” way.

Studies and therapy surrounding environment-focused psychological distress had people imagining environments or working up to placing oneself in a real environment. The simulations within VR allows researchers, therapists, and patients unprecedented control over the environments they are placed in.

One such exercise is a series of 360° photographs of the same room. Each photograph is more cluttered than the previous. Floorboards become hidden beneath magazines, household objects multiply, and mountains of furniture and clothing block out the sunlight. As the subject progresses through this series of photographs, McCabe-Bennet monitors their heart rate and emotional reaction to the increasing clutter. 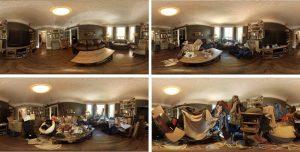 “Seeing someone else’s clutter has a very different feeling from seeing your own clutter. It’s something people call ‘clutter blindness,’” said McCabe-Bennet.

According to the Diagnostic and Statistical Manual of Mental Disorders, “clutter blindness” is defined as the inability of a person to “see” clutter in front of them. A person may literally see newspapers, dishes or other objects in the area but their mind may minimize or ignore the mess.*

Test participant Roxanne Tellier confirmed this phenomenon. Tellier estimates that she has about 10,000 books. In order to store her immense collection, she has taken out two storage lockers.

“As George Carlin famously said, ‘Other people’s stuff is shit, and your shit is stuff,’” said Tellier.

During the test she described feeling more uncomfortable each time she was exposed to the increasing clutter. She also said that focusing on how a person feels in the situation is more effective than shaming the person for hoarding.

“The testing allowed me to put my personal experience of hoarding into perspective. I’ve also seen a change in how I view hoarding in general,” she said.

The amount of “stuff” in one’s home can pose hygiene problems, fire safety, and accessibility issues. In extreme cases, hoarding impedes the life of the hoarder by rendering a living space unusable. This can also becomes a source of shame for the hoarder.  As a result, it is not unusual to see boarded or blacked out windows in their home.

“In hoarding, there’s shame and embarrassment with having people over,” explained McCabe-Bennet. “So, socialization can become a problem.”

However, in the 2013 edition of the Diagnostic and Statistical Manual of Mental Disorders, hoarding has been characterized for the first time as a distinct disorder. This manual, used by experts in the field of psychology, had previously lumped in hoarding with OCD.

McCabe-Bennet said the differences between OCD and hoarding disorder is determined by motivation.

McCabe-Bennet’s study with hoarding and VR is primarily a research tool. However, with the advent of increased used of VR in psychology, McCabe-Bennet said it may be possible to develop a treatment for hoarding disorder.

“It’s conceivably possible that we can go in to people’s actual homes, get those photographs, and be able to work with them in an office,” she said.

*Correction: An earlier version of this story incorrectly stated the definition of  clutter blindness as the “difficulty to discard personal items regardless of usefulness or value.” In fact, this definition was incorrect. The Eyeopener regrets this error.