So far, so good for Ryerson University’s fastpitch team.

The Rams started their second-ever season with a pair of wins against the York University Lions on Friday, taking the first game of the double-header 5-0 and closing out the night with a 5-3 victory.

Starting pitchers Abbey Thompson and Samantha Jackson shut down the Lions all night, with both hurlers going the distance in their first starts of the year. In the first game at Sonoma Heights Park, Thompson didn’t allow a single York run, allowing just five hits scattered over nine innings.

Jackson followed that up by limiting the Lions to three runs, with only one earned, to secure the Rams’ second win of the 2017 season.

“I was hitting my spots well,” Thompson said modestly following Friday’s win. “I also had a really good warm up, so all my pitches were working well today, which was really helpful.”

The Rams also repeatedly took advantage of the Lions’ defensive miscues by wreaking havoc on the basepaths, leading to a combined six stolen bases over their two games.

“I think good teams look to take the game to the opposition to put pressure on the other team,” said Ryerson assistant coach Dan Berlin . “So stealing bases is a great opportunity to do that.” 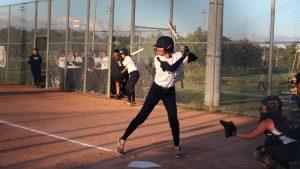 To steal bases, of course, a team must first get on base, something the Rams did well during both contests. Outfielder Emily Carr was a standout for Ryerson, lacing a pair of RBI doubles, one in each game.

“I was thinking ahead and kept thinking ‘If this ball comes to me, what am I going to do with it?’,” Carr said. “I was just trying to remain confident out there and it definitely paid off.”

While Carr, Thompson and Jackson were keys to the Rams’ success, Berlin was impressed with the entire team’s efforts on opening night.

“We take a lot of pride in making everybody on this team feel like they’re a contributor. In the case of both of our wins, everyone got a chance to play and contribute,” he said.

“[The coaching staff and I] preached early on that it was important that we gel together as a team,” said Berlin. “The girls all get along and come ready to play, and that’s been the secret ingredient that’s helping us play to our potential so far.”

Up Next: The Rams will look to continue their strong start when they head to Kingston on Sunday Sept. 10 to take on the Queen’s Gaels for a double- header at Garrigan Park starting at 11 a.m.