In the second game of their double-header, Ryerson ended their three-game slump to open the year, including an 11-3 drubbing at the hands of the Gryphons in their first game of the day. Behind Sucre’s seven strikeouts, and some solid batting when it counted, the Rams bounced back and ended the weekend with a win.

“[Sucre] was dominant out there,” said Rams head coach Ben Rich. “The guys came through in the clutch when we needed to which is nice to see.”

The Rams knew they had to edge their way past the Gryphons once they found themselves tied 1-1 in the sixth inning. Nobody knew better than Rich.

“You’ve got to recognize these moments on your own!” he shouted to the dugout.

Then, Pete Astopolous, who had Ryerson’s only RBI, stepped up for the Rams. Astopolous connected for another base hit to give his team the lead. After RJ Mienkowski hit into a fielder’s choice to put a man on third, rookie shortstop Phil Seguin drove in his first-career OUA RBI to boost Ryerson’s lead to 3-1.

From there, Ryerson’s pitching and defence kept the Gryphons at bay.

“I didn’t do this on my own,” said Sucre, who played three of four weekend games for Ryerson, including two at third base. “I had my defence there doing every play and I was happy.”

The win was a welcome sight for Rich’s squad, especially after being outscored 33-10 in their first three games of the season.  That included a 11-3 loss earlier on Sunday.

Ryerson was in it until the seventh inning, but Rams fifth-year pitcher Caleb King blew the game wide open. The Gryphons scored seven runs in the frame, including four before Ryerson could make a single out. That was it for King.

“I think they made the right call to pull me out,” King said. “I’d been through the order three or four times, so they were getting used to what I was throwing.”

The Rams’ Kyle Conquer batted in two runs in the eighth, but the rally was cut short. 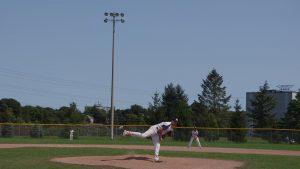 In the bottom of the ninth, Ryerson left the bases loaded, but even a grand slam would have left them trailing by four.

“It was a much better game than the score reflected,” Rich said following the 11-3 loss. “A lot of improvement, but there is still more to go.”

Ryerson is set to host this year’s conference playoffs, so they automatically earn a spot. Rich was happy to come away with a win, but if the Rams hope to succeed in the postseason, they’ll need more performances like Sucre’s, and fewer lopsided defeats.

Up Next: The Rams will take the road to face the Queen’s University Gaels in another double-header on Saturday, Sept. 16 starting at 11 a.m.