This year, for the first time since 2011, the Ryerson women’s soccer team (7-6-3) will be playing playoff soccer.

After winning a program-best seven games in the 2017 season, the Rams aren’t in their division’s basement for any longer. Instead, they’re back in the race for their first Ontario University Athletics (OUA) crown.

Seeded fifth in the OUA East, the Rams will face the fourth-place Laurentian Voyageurs on Oct. 25 in Sudbury, Ont. The two teams faced each other twice this season, with Ryerson taking both matches and outscoring the Voyageurs 3-0.

Led by head coach Ivan Joseph, the Rams will be hoping for a similar outcome on Wednesday, looking for their squad to translate their style of play from the regular season to the playoffs. A win would be historic, since the Rams have never made it past the first round of the OUA playoffs.

Thanks to strong performances from rookies like Victoria Watson—who scored a team-leading nine goals—and supported by reliable veterans like Alessia Carvalho, Soraya El-Houni and Elise Lapadula, the Rams climbed their way into the postseason.

The rise of Ryerson’s young squad was unlikely, especially after recording at least 10 losses in three of five seasons since their most recent playoff appearance.

This year, the Rams were outscored by opponents 27-24, and ranked middle-to-last in most of the division’s offensive categories—normally a sure sign of a team destined to miss the postseason.

Instead, Ryerson showed the ability to hold tights leads, putting up stout defences on their way to taking four of their seven victories by only one goal. 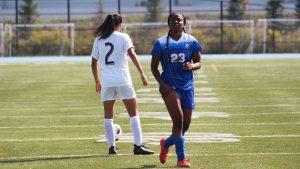 Victoria Watson led the way for Ryerson in their rout of Carleton Sunday at Downsview Park (Photo: Sarah Krichel)

The Rams also had to overcome adversity after fourth-year starting goalkeeper Brittney Clendenan suffered a devastating leg injury halfway through the season,  leaving a gaping leadership hole in a young team.

In response, Lapadula, a third-year keeper, filled in proficiently, putting up a .696 save percentage and an even win-loss record, enough to push Ryerson above .500 by season’s end.

Watson finished the season ninth in goals scored in the OUA, but she was far from the only Ram who produced on the offensive end; ten other Ryerson players found the back of the net this season.

In order for Ryerson to come away with a win against Laurentian on Wednesday, it’ll require another full team effort. The Voyageurs should also be their easiest test of the playoffs.

To move on to their first U Sports championship in program history, Ryerson will likely have to compete against other division rivals in Queen’s University, the University of Ontario Institute of Technology and the University of Ottawa, who have combined to provide the Rams with all six of their losses this season.

Before worrying about those opponents, Ryerson will first have to get past a Laurentian team eager to send the Rams packing.