On Oct. 21 I received a Facebook message from a person I’d never met before.

The message read, “Hey, I have no idea who you are, but there’s probably someone you need to block on your friends list…sorry to show you this.”

When I clicked on the link attached, I was redirected to an anonymous post detailing the time the person who submitted the post claimed they met me. The post quickly turned into a complaint about two separate occasions where I ignored their attempts to contact me. Without my consent, I’d become the subject of a Ryerson Confessions (also known as RU Confessions) post, viewed by hundreds.

The post was about a girl named “E*****d B*******n.” It didn’t take much to fill in the blanks. The post was only taken down after several people reported it.

In a private message, the current admin of the page told me while they were sorry about the “inconvenience” it had caused me, there was no way they could tell who the person was that had submitted the confession. I soon realized this was more common than I thought.

The ever-growing Ryerson Confessions Facebook page is anonymously-run space where Ryerson students unveil their deepest and darkest secrets. Currently, the page has over 7,300 followers.

From confused students and star-crossed lovers anonymously posting in the hopes of finding their soul mates, to allegations of rape, sexual harassment and transphobic remarks, the page has attracted a lot of attention since its creation in 2014. 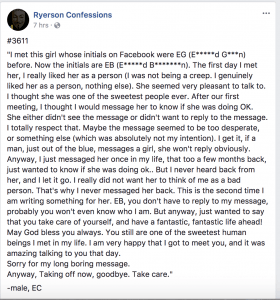 On May 1, an anonymous post was made by a woman who said she had been raped in Kerr Hall West while she was studying for her exam. The post generated controversial comments, spanning from offers of support to posts suggesting she lied for attention. The next day, The Eyeopener reported that Ryerson security was investigating a rape allegation in response to the post. Toronto police also investigated the allegation.

Posts on the page have also targeted executives from the Ryerson Students’ Union (RSU). RSU vice-president equity Camryn Harlick said that being the constant subject of hate posts on Ryerson Confessions throughout the year made them anxious and sick “on a daily basis” to the point that they resorted to unfollowing and unsubscribing from the page.

In particular, after the RSU launched the controversial Colonialism 150 campaign, a series of Ryerson Confessions posts were made about Harlick.

“Around the time of [the Canada 150 celebrations], there were a lot of posts from folks who were saying that I shouldn’t keep my job,” said Harlick. “There were always a lot of fun slurs thrown in the comments sections there and because of posts on that page that folks noticed, I ended up getting a lot of death threats on my personal account.”

There have also been politically-charged posts made on the page by people claiming to be RSU board members in the past.

On July 21, RSU president Susanne Nyaga was impersonated by an anonymous poster on the page. The post was a copy of a speech Nyaga posted publicly on her Facebook news feed after RSU election results were released.

While Nyaga said the post may have been “pointless” and done very “little damage” to her, she said that people need to recognize the potential to do harm with the existence of such a page.

Over the years, there have been many rumours surrounding the identity of the person behind the page, but none of them have ever been publicly confirmed. To those within the Ryerson Confessions inner circle, the admin goes by the username “Mistery.”

Amar Latchman, an engineering student at Ryerson and a current moderator of Ryerson Confessions, told The Eye the page is an opportunity to make Ryerson students kinder to one another in-person, and gives students the opportunity to publicly put down racism and hate speech, instead of “just shutting them up.” 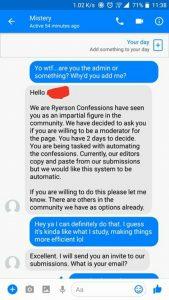 According to Latchman, the pain that students have felt as a result of the hurtful content of the page is justified.

“Pain is going to exist,” he said. “It shows you that these people are still out there while also allowing you to take a hack at them and show them that they’re wrong.”

Latchman is a fairly new recruit, having only been approached by the Ryerson Confessions admin this October to automate their submissions system. Latchman said he was hired anonymously, and that in his week and a half of working for Ryerson Confessions, nobody has ever met with him in-person or revealed themselves to him.

Latchman is just one of many moderators who have been anonymously recruited through the admin “Mistery” account to work for Ryerson Confessions. Although Latchman was only hired recently, he said moderators are anonymously hired and cycled through every couple of months, depending on their needs.

Up until Latchman’s induction, there were always three positions within the page organization. Now that the system’s been automated, the page will no longer need editors to approve them.

The original creator of the Ryerson Confessions page—a male Ryerson engineering student who spoke to The Eye on the condition of anonymity—said he came up with the idea for the page in August 2014, while he was technically still in high school, a full month away from starting at Ryerson.

Knowing exactly who was submitting all of the posts—as well as the constant fear of people finding out he was the administrator—led him to implement Google Forms for submissions in order to keep the group completely anonymous.

In May 2015, he gave himself a break from being the administrator, leaving his friends in control of the page. But when he tried to regain control of his account in September 2015, he said he was removed by the friends he’d left in charge and went “completely off the grid.”

When asked about whether or not he felt that the page he created was still considered a good space for students, the former admin admitted he does not support the way the page has been running over the past year. The hurtful comments, he said, were not what he’d intended the group to be for.

“I’ve been through that and I realized that this is totally not cool, it wasn’t right and I didn’t want to give people access to that,” he said.

He said although he is in support of critiquing Ryerson groups like the RSU, targeting individuals crosses a line.

“There’s no justifying it,” he said.

Harlick said that because of offensive posts on the page, they went to the university for help, only to be told that Ryerson “couldn’t and wouldn’t step in.”

Right now, the original admin says the page should exist, and that someone would just fill that role if they were to shut it down. “If it does go down, someone will just start another one. Someone will.”