If you were to ask Ryerson students whether the school had a women’s cricket team, you’d likely hear actual crickets chirping.

But if you were to walk through the halls near the Upper Kerr Hall Gym on any Tuesday at around noon, you’d hear the scuffling of running shoes, the crack of a bat as it connects with a ball and shouts of encouragement among women. 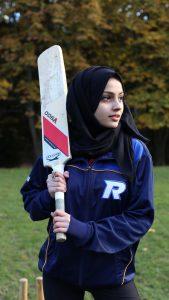 Though it was named Canada’s first national sport in 1867 by Sir John A. Macdonald, cricket’s popularity declined as hockey gained a larger following. Though cricket is still popular in South Asian and Commonwealth countries, it’s rarely made an appearance in Canada’s physical education curriculum.

“It’s not only new to the school, it’s new to the women on the team. It’s extracurricular, but I think it’s an extra mile of extra-curricular because we’re learning from scratch,” said Hirra Farooqi, the director of Ryerson’s women’s cricket team as well as the acting captain.

Farooqi, a third-year journalism student, was inspired to start a team at Ryerson in April 2017 after seeing the success of women’s cricket at the University of Waterloo. Other schools, including Wilfrid Laurier University and the University of Ontario Institute of Technology, have added women’s teams in recent years as well.

With Ryerson’s men’s cricket team having already developed a winning culture since starting in 2015, Farooqi felt women should also have the opportunity to represent their school.

“Even just watching [cricket] on TV, the representation has always been male-dominated,” said Farooqi. This lack of representation led her to believe there might be a lack of interest from female students at Ryerson, but she was quickly proven wrong.

Farooqi soon learned that women at Ryerson were just as enthusiastic as she was about the opportunity to pick up a bat, grab a ball and score some runs in one of the world’s most popular sports.

The team’s slogan “#WomenCan” is meant to show that cricket is open to any person, regardless of gender or level of experience.

“It’s just to remind people that it’s not meant to be a male-dominated sport, it’s meant for everyone. To show that we can play the sport,” said Farooqi.

Farooqi felt holding tryouts for this unfamiliar sport would exclude beginners, so she decided to keep practices open to any woman willing to learn. Farooqi herself hasn’t played cricket since moving to Canada from Pakistan seven years ago, while many of the other girls on the team haven’t played before at all.

“When I was playing in Pakistan, I was always just shadowing my male cousins and I was never playing seriously. There’s a term called ‘galli’ cricket, basically street cricket, and that’s what I was used to,” said Farooqi.

Though she started the team, Farooqi also had to familiarize herself with the rules of indoor cricket and the speed at which the ball comes. Asima Iqbal, a third-year psychology student, had never played cricket before attending a practice in September, where she first experienced the satisfaction of smacking the ball and watching it careen off the back wall.

“Getting the proper form was a bit hard. When you’re bowling, you have to keep your arm straight and aim it right at the wickets,” said Iqbal. “It’s nice because everyone’s learning, so we’re all helping each other and it’s so fun.”

Women’s cricket holds drop-in practices every Tuesday from noon to 3 p.m. in the Upper Kerr Hall Gym. The women are coached by Hussain Jawa, a member of the Ryerson men’s cricket team who has prior coaching experience.

Jawa, who has played for seven years, said he’s incredibly proud of the team’s progress, especially when considering how many of the players hadn’t ever taken a single swing before the school year began. “From our first practice to now, the improvement is so impressive,” said Jawa. 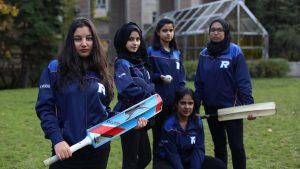 At times, some of the men’s cricketers would join in for a game with the women while offering a helping hand at practice. “Some of these girls are moving better than some of the men’s players,” Jawa added—and the men’s team won an American College Cricket title earlier this year after making the trip down south.

Though some players are new to the game, others have rediscovered a sport they once loved. Maha Zafar’s passion for cricket began when she first played at the age of five in her birth country of Qatar. Her mother, a member of the Asian Cricket Council and a former coach for Qatar’s national cricket team, had always encouraged her to play.

When Zafar’s family moved to Mississauga seven years ago, they made sure to bring her cricket bat even though airplane regulations required them to tie it to a suitcase in order to board the 16-hour flight.

In high school, she no longer had a cricket team to play on and always kept an eye out for opportunities to pick up the sport once again. Those opportunities didn’t reveal themselves until this Halloween, when the fifth-year electrical engineering student participated in her first drop-in practice with the women’s cricket team.

Right now, the team is focused on its first game in Waterloo on Nov. 18 as part of a tournament held between the women’s teams of Ryerson, Waterloo and Laurier universities. The women are so eager to get started that they’re paying for their own jerseys and transportation fees, rather than waiting for university funding.

They’ll start fundraising after their first tournament in hopes of travelling to Florida in March to play in the American national championships. Eventually, they hope to coordinate a similar tournament for Canadian women’s cricket teams.

“It’s not even a matter of winning or losing,” said Zafar. “I’m just so excited that there’s an initiative for females and I’m getting the chance to play.”