Students for Justice in Palestine (SJP) at Ryerson teamed up with the Toronto Palestine Film Festival (TPFF) on Friday night to screen the documentary Thank God It’s Friday to raise awareness about political prisoners in Palestine.

Organizers asked attendees to contribute their signature to the “No Way to Treat a Child Canada” campaign and to register for updates from the group. The petition calls on the Canadian federal government to put pressure on the Israeli government to free Palestinian minors from their prisons.

“The more people show up, the more people know about what’s actually going on in Palestine,” said SJP member Samanah Ali. “The amount of people that came here show that people do care about this cause.”

Thank God It’s Friday presents the contrast between life in the occupied West Bank for the family of Palestinian prisoner 17-year-old Ahed Tamimi, in the village of Nabi Saleh and for Israelis on the neighbouring settlement of Neveh Tzuf as it follows the narrative of daily life for some of those on each side.

“It’s good to tell people in Canada and Ryerson about a pressing issue, and how people, they are suffering under occupation,” said attendee Omar Saleh.

He said he appreciated the efforts of filmmakers to present the perspective of the Israelis in the settlements to provide understanding of their views. 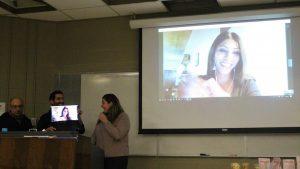 When the film ended, a Q & A session began via Skype with Yafa Jarrar, a Palestinian activist based in Ottawa.

Jarrar told the audience about the arrest of her mother who is both a human rights leader and a member of the Palestinian legislative council.

She spoke about the conditions of prisons, saying that prisoners sometimes conduct studies while they are incarcerated.

“I recently heard back from my mother, and I only hear from her through lawyers who visit her, right now, about Ahed, actually, Ahed Tamimi,” said Jarrar. “Ahed right now is working on a research project with my mother on the military court system in Israel. We’re hoping that all these research projects from inside jail get published after they’re done.”

She continued to discuss the positive changes that women are creating within the prisons.

“The female adults who are in prison are dividing the tasks of who is experienced in certain topics to continue the education of these girls who should be in school.”

A member of the volunteer team responsible for the production and organization of TPFF, Dania Majid, said that the group was originally created to acknowledge the nakba, which translates to “the catastrophe” and refers to the expulsion of Palestinians during the late 1940s.

Despite the event’s origins, Majid expressed that TPFF has grown and evolved to explore other facets of Palestinian life.