The Ryerson Students’ Union (RSU) executive members for the 2018-2019 school year will all be members of the Unify slate. Members of all three slates—Unify, Elevate and the Rhino party—snagged faculty director positions. 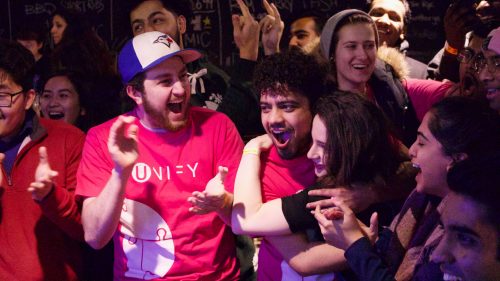 Ram Ganesh, the RSU’s new president, says the results shocked him. “We expected a 300-vote lead, but not this big,” he said. “Susanne [Nyaga, Elevate’s presidential candidate] was on top of her stuff. She ran an excellent campaign.”

Elevate’s candidate for the vice-president operations position, Adam Asmar, was one of the few members of Elevate who showed up to the election results at the Ram in the Rye.

“I would like to see the election results analyzed a little further and see what the voter turnout was, who voted from where and just learn from my mistakes to see where I can be a better candidate in the future.”

Karolina Surowiec on winning VP equity: “I am surprised. I didn’t think it was gonna be that big of a number…Camryn [Harlick] is probably the sweetest person ever and it’s tough running against someone you know. But at the end of the day it is what it is I can’t believe I won” pic.twitter.com/ud17eqcZGG

.@EdmundSofo on winning VP student life & events: “I wasn’t expecting [the sweep] but it’s great that it happened. It’s amazing. We apply for these things and we just hope and we stick to our plan and it looks like it came to fruition.” pic.twitter.com/iFhG0ZtAtD