The commitment was made ahead of the TTC board meeting on March 20, where TTC staff and student unions from post-secondary institutions across Toronto will present the final proposal to the commissions board for adoption of the discounted transit pass (U-Pass).

“TTC will be approving a price that is lower than $80,” Lis said. “We’ll have student representatives from different parts of the city at the board meeting to present our case to the TTC and advocate for an even lower price.”

Presently, post-secondary students pay $116.75 for monthly Metropasses. Like that pass, the U-Pass would give riders unlimited trips.

“TTC will be approving a price that is lower than $80”

Lis and the RSU have been working with George Brown, OCAD and the University of Toronto since May 2017 to implement U-Pass, however other post-secondary institutions, such as Humber and Seneca, recently expressed interest.

If approved by the board on March 20, schools will be able to apply for the discounted pass which would be included in students’ tuition payments, without an option for students to opt out of the additional fee.

“People will be able to opt out if they do not use TTC because of AODA compliance. If they have disabilities that prevent them from using the TTC, they legally have an opt-out,” Lis said.

The U-Commute survey conducted by the RSU and other student unions, which surveyed over 16,000 students across Toronto campuses, found 95 per cent of students would be in favour of a U-Pass, Lis said. 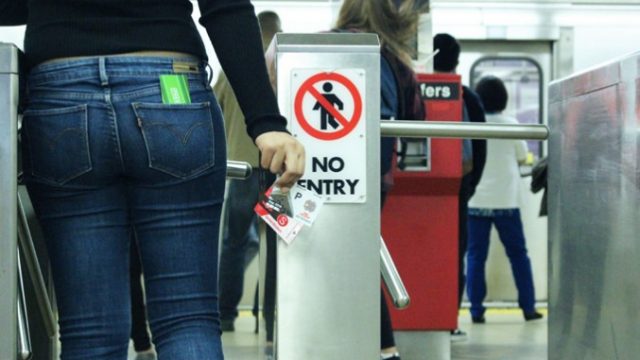 Presto is taking over the TTC. (Photo: Izabella Balcerzak)

A few years ago, the TTC  attempted to create a subsidized monthly pass for post-secondary institutions with no success.

“Students weren’t very interested in it, they were happy with the price schedules at the time,” Lis said. “Now what we’re seeing is the way that pricing is around transit is too expensive for students.”

Selene Martinez, a fifth-year business technology management student will not directly  benefit from the implementation of U-Pass at Ryerson since she is graduating this coming June, but she is supportive of the idea nonetheless.

“I think it would be a good thing for people who live far and have to commute to class every day,” Martinez said. “It would have been nice to have for the last few years since I live in Scarborough and commute about an hour and half.”

Others, like Veronika Wiszniewska, a first-year graphic communication managment student, are hesitant on the idea due to the burden it places on non-commuters. As a Mississauga resident, Wiszniewska uses two transit systems daily and the costs are high.

“As a commuter, personally, I would love that, but at the same time I’m afraid it might not be fair for students who live on campus” Wiszniewska said. “I feel like it’s a complicated matter that should only be implemented for students who actually commute.”

Grace Willock, a first year performance dance student, said that since she lives on campus, she won’t use the TTC often enough to benefit from the pass.

“It’s kind of like my mandatory meal plan. I don’t use it very much and I’ve spent a couple thousand dollars on it,” Willock said. “It would be better if there was a way to opt out of it.”

If the commission’s board approves the proposal, a referendum question will need to be filed with the Board of Governors at Ryerson on March 29 for a fall referendum. Students will then be able to vote on the implementation of U-Pass in September.

“I’m very happy about the price. I think students would be very happy and I would urge them to vote in September,” Lis said.