A new exhibit at the Modern Literature and Culture Research Centre (MLC) is shining the spotlight on the forgotten work of female artists during the First World War.

“Parallels” is a joint collaboration between the MLC and the Canadian Centre for the Great War (CCGW), featuring the works of a triad of female artists: photographer Elsie Holloway, sculptor Francis Loring, and landscape painter Mary Riter Hamilton.

Curator Caitlin Bailey, who serves as the executive director at CCGW decided to put the women in a single exhibit. She found out about Holloway through a blog post published by her centre, and decided to dig deeper, leading her to the other two.

“They all created a representation of the war but they had such different experiences and I wanted to put that together.”

The exhibition is the first of its kind. There’s been no in-depth look at war art created by women from the First World War.

Dr. Irene Gammel, Canadian research chair at the MLC says that women have usually been neglected in the consideration of war itself.

“It’s probably because at the time war was still very much considered a male terrain,” Gammel said. “So there were only few women who pushed against those boundaries and asserted their perspective.” 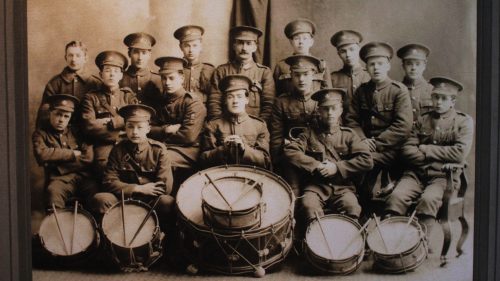 The exhibition marks the first public announcement of Mary Riter Hamilton’s real birth date, a fact Gammel spent years trying to corroborate. Bailey says Gammel’s been trying to get other history institutions to adjust the date, but there’s no interest. Bailey and Gammel both say information on the women was hard to find, because there wasn’t much interest in their work, an effect of their gender.

“Mary Riter Hamilton is a footnote,” said Bailey. “All of these women with possibly the exception of Francis Loring are footnotes in art history and it’s very hard to find information on them.

“I think going forward we need to be more diligent in chasing these kinds of things down.”

Bailey says the focus of the exhibition isn’t necessarily the work these women produced but instead the social context that defined it.

“I realized when you read about all these people, there’s a sort of romanticization of their role. It’s like ‘Oh they painted the homefront, they were so strong for painting the homefront, what brave people’ but when I started looking into it, it was like ‘Yeah, they did paint the homefront but there were very particular set of social conditions which meant that was all they could paint or represent.” 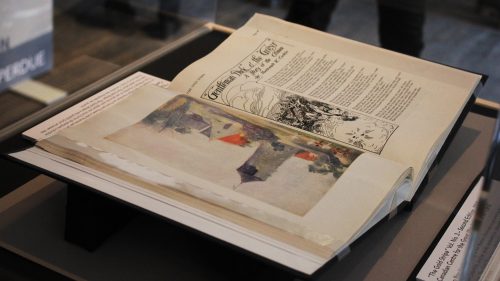 A journal featuring the paintings of Mary Riter Hamilton who was commissioned the the War Amputees to document war landscapes.

Mary Riter Hamilton wasn’t allowed at the warfront, until a commission from the War Amputees of Canada given to her after the war, which she used to depict the devastated landscapes left after the war. Elsie Holloway, constrained to the homefront, photographed soldiers before they left for war. Francis Loring, similarly sculpted figures at the homefront.

Bailey says the female perspective plays a role in the how well the works have aged.

“The art that was produced under the Canadian War Memorial’s fund commission doesn’t age well because it has a very patriotic view or its very made for it’s time, it’s super nationalistic,” said Bailey. “These age beautifully because of the humanity in them and I think that is a factor of the women because they were acutely aware of grief, of loneliness, of passing of time.”

Besides the difficulty in researching the women, getting interest in the exhibition was its own challenge. “Parallels” was intentionally promoted on International Women’s Day.

Gammel and Bailey both hope the field of curating starts opening up to more perspectives. Bailey says she considers herself an “oddity” in the male dominated field of war studies.

“That is part of the work we are hoping to do here, we really want to insert women’s perspective, we want to insert gender as a category for considering the war itself, that is something that has begun in scholarship but still has a ways to go.” 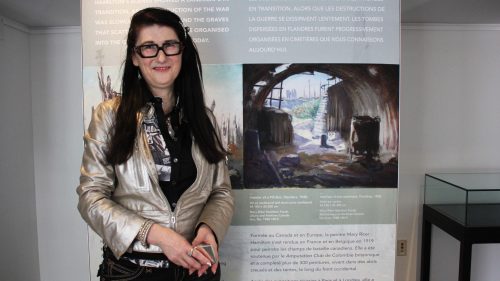 Dr. Irene Gammel, the research chair at the MLC, in front of Mary Riter Hamilton’s work.