By Annie Arnone and Jacklyn Gilmor

The installation of planters on a Victoria Street sidewalk resulted in the forced removal of Jason, a community member who has been using the corner of Victoria and Dundas streets as a place of shelter.

On March 21, Toronto Police Service received a call for an “unwanted guest” situated in front of the Tim Hortons on Victoria Street. Upon arrival, they found Jason—who had set up shelter by the restaurant for the past several months, and used other parts of campus as a home for almost a decade. He was told to vacate the area, as planters were to be installed in the same location.

Jason, who did not wish to disclose his full name to The Eyeopener, said he was forced to relocate.

“I’ll be OK, but I need to find a new place to stay,” he said. The area in front of the restaurant is sheltered from wind and rain. Jason had kept his belongings stacked under blankets up against a pillar. He was well-known for holding open the door for Tim Hortons customers.

Patricia Anderson, the manager of Partnership Development, Shelter, Support and Housing Administration for the City of Toronto, wrote in an email that the removal was a coordinated years-long effort to get Jason off the street and into housing.

Anderson said the encampment was illegal and a right-of-way issue. She said the organizations involved  spoke in advance about the fact that there would be a removal. The process included “outreach to those in the encampment on several occasions by Streets to Homes with offers of assistance, including referrals to shelters, other warm sites and assistance to find permanent housing,” she wrote.

The effort was between Transportation Services, the Streets to Homes program, and the Downtown Yonge Business Improvement Area (BIA) which is a non-profit organization that works to market the downtown Yonge area and keep it clean and safe.

Mark Garner, the Chief Operating Officer and Executive Director of the Downtown Yonge BIA, said the planters were brought in as an attempt to get Jason “help.”

“Jason has been deemed a chronic homelessness issue in our area,” Garner told The Eye. “He’s got dental issues, various mental health issues—he’s been at that space for close to 10 years. If we don’t do something for him, he’s going to die on the street.” 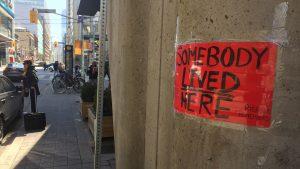 He added that his team has been attempting to get Jason into community housing for years, but Jason never accepted their offer. This, according to Garner, was a last attempt to find him “proper shelter.”

“The planters were to let him know that this was not a location he could be in—this is not our approach to push homeless people out of the area, this was a targeted focus for Jason.”

Some members of the Ryerson community have voiced their opinions about the situation—mostly disagreeing with Garner’s tactics.

On Monday, someone taped posters to the columns outside of Tim Hortons, as well as the garbage cans  reading “Somebody lived here,” and “And we just threw him away.”

“I think it’s a little bit ridiculous. How can you replace a human life with a potted plant?” said Nabiha Syed, a third-year graphic communications management student. Syed used to see Jason all the time, she said, and would sometimes buy him a muffin while getting her morning coffee. “He was nice, he’d say thank you,” she said.

Joshua Maitland, a second-year electrical engineering student, said he also saw Jason regularly on campus. “I thought he was a nice guy, just doing his thing,” he said. According to Maitland, Jason opened the door for him and his friends many times.

“I think [his camp] was sort of bottlenecking the traffic area maybe, but I don’t see how it was that much of a problem,” said Maitland. “If that was his living space, what does he have now? Not much.”

Ryerson president Mohamed Lachemi said the university had nothing to do with Jason’s removal, but was aware it would be taking place.

“I think they really wanted to help Jason and find him a place to live because they were concerned about his wellbeing and health,” he said.

“I don’t think that he has caused any trouble. I’m not aware of anything he initiated.”