Two Unify candidates were disqualified from the RSU elections for campaigning in prohibited locations, according to a report obtained by The Eyeopener.

Mohammed Malek and Vishaal Venkatesh ran for seats on the Board of Directors during the 2018/2019 RSU elections. Each candidate received enough votes to obtain a position on the board had they not been disqualified. During the release of the election results on Feb.15, it was announced that neither Malek nor Venkatesh would qualify for their seats.

In an annual report summarizing the RSU election, Chief Returning Officer (CRO) Amiri Dear stated both candidates had been immediately disqualified for receiving too many demerit points.

An RSU election candidate is disqualified when he or she has obtained over 10 demerit points. These are obtained if a candidate breaks election procedure bylaws outlined in RSU Elections Nomination Package and Elections Procedure Code. Disqualification and demerit points can be awarded for a number of reasons including failure to submit campaign expense receipts, using election materials with racist, sexist, or other offensive connotations; defacing another candidate’s election materials and using alcoholic beverages to influence elections.

Malek and Venkatesh each received three demerit points. However, because the Unify campaign had already received nine demerit points, each candidate was immediately disqualified. 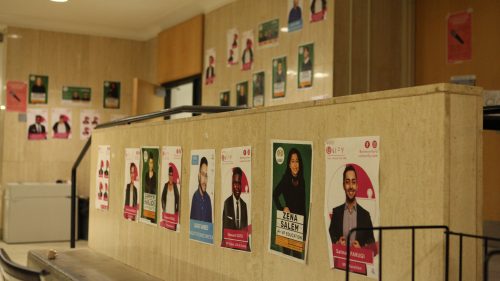 Malek denied knowing the students were polling clerks and said the incident which led to his disqualification lasted fewer than 30 seconds.

“It was an unfair decision based on unilateral information. The polling station was littered with pamphlets and buttons so I assumed it was another community resource table,” said Malek in a message to The Eye. “According to the clerks it took ‘several attempts’ to get me to leave. The truth is I left as soon as they told me the site was off limits.”

“It was an innocent mistake blown way out of proportion. A lot of mistakes were made in handling the situation,” he added.

However, according to the CRO’s report, Malek’s violation was “inexcusable” as the Campaign Rules and Election Procedure Code are clear on the prohibition of campaigning close to a polling station.

“It’s my personal opinion that the CRO Amiri Dear failed to perform his duties in a fair and equitable manner,” wrote Malek. “People make mistakes and fail to notice what seems obvious when they’re sleep deprived. He doesn’t seem to grasp the concept of inattentional blindness.”

Malek will appeal his disqualification.

“It was an innocent mistake blown way out of proportion”

Venkatesh, who was campaigning for a faculty of Engineering and Architectural Sciences seat, sent unsolicited electronic messages asking for votes, Dear wrote. According to election bylaws, candidates are forbidden from campaigning via Facebook, email, or any other form of electronic messaging.

“As you might know, I am running in the RSU election. It would mean a lot to me if you could take 30 seconds to vote for me,” Venkatesh wrote to an undisclosed complainant.

According to the email sent to the CRO, the complainant said she had never discussed any election matters with Venkatesh and had never given him permission to message her regarding his candidacy. Venkatesh has not responded to The Eye’s request for comment.

“The slate with which Vishaal is associated had already been sanctioned as a whole for this behaviour,” wrote Dear in his report.

The Unify campaign had received a total of six demerit points for sending unsolicited campaign messages to students. A student alleges that the slate got her email through an RSU student group list, according to Dear’s report.

“Flagrant disrespect of the electoral process”

To appeal a CRO’s decision, a candidate must complete an “Elections Complaints/Appeals” form. Following this, the candidate is brought before an Elections Appeals Committee which decides either to uphold or withdraw the disqualification.

While The Eye does not know if Venkatesh has launched an appeal, both candidates disqualified won a sufficient number of votes to win a seat in each of their respective faculties.

If both candidates’ appeals are successful, one person in each of Venkatesh and Malek’s faculties will be forced to give their currently-held seat up.

Malek won 345 votes in the Faculty of Community Services, qualifying him for one of the five seats. While Chealsea Davenport (364) and Ram Ragupathy (348) received more votes than Malek, candidates Cristal Hines (341), Shivangi Gaur (333), and Khadija Raza (332) did not.

As a result, if Malek’s disqualification is withdrawn, the candidate who holds a seat with the least amount of votes, Khadija Raza, will lose their position.

With Venkatesh’s 651 votes, Daniyal Patricio of the Faculty of Engineering would also lose his seat following a successful appeal.

The results of the RSU election can be found on the RSU’s website.