Reem Ahmed, a Ryerson biomedical engineering grad, will be the first Muslim-hijabi contestant on Masterchef Canada.

Ahmed was announced amongst the top 21 cooks participating in MasterChef Canada, where contestants  showcase their culinary talents. She graduated from Ryerson in 2015.

As the first Muslim-hijabi contestant to be featured on the show, Ahmed says the misconceptions surrounding Muslim women did not stop her, knowing working to break those barriers is the only response in addition to the importance of moving forward rather than remaining flawless.

“In order to clear these misconceptions, we have to fully integrate into our society and dispel those terrible misconceptions about Muslims in general, Muslim women specifically.”

Ahmed interest in cooking stems from growing up watching her mother and grandmother in Egypt hosting dinners and gatherings, bringing recipes and families together.

Fast forward to ten years of being in Canada, and graduating from engineering, Ahmed says despite her lack of passion for engineering, it was still a positive outcome. She said the mental skills used in engineering were brought into cooking, making her shift from engineer to chef “not as challenging.”

“Other than finally enjoying what I do, it wasn’t really different. A lot of the analytical and reasoning skills learned throughout engineering are applicable to cooking and this actually helped me quite a bit.” 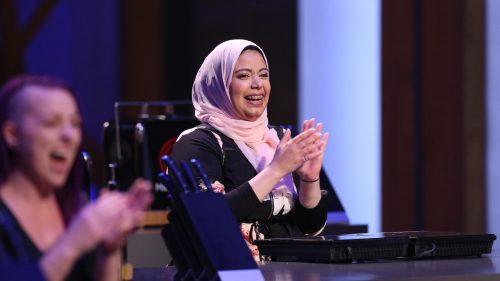 Ahmed started her cooking journey after she got married, and started to recreate her grandmother and mother’s traditional recipes.

“My grandmother and mother always had people gathered and served them the most delicious meals, it made me want to recreate that memory.”

Ahmed said she was hesitant at first before applying, but still took a step forward knowing her skills and talents were worth showcasing.

“There was some skepticism at the beginning but by being successful in what you are doing and achieving your goals, doing the things you love, and when you are confident about your abilities, then everyone will come around and support you.”

Ahmed’s plans to enhance her career go beyond the show, with potential plans in the future to further her cooking career: “I hope to open my own restaurant called ‘The Pyramid’ and maybe one day have my own cooking show.”

MasterChef Canada will air on April 3.