Thanks to the Ryerson Rams, that impressive streak is over. Behind 28 points by guard Manny Diressa, the Rams cruised to a 84-76 victory in the Final 8 semifinals, advancing to the gold medal game.

With just over two minutes left in the fourth quarter, the Ryerson Rams men’s basketball team was in position to do something many wouldn’t have thought possible heading into the Final 8 in Halifax.

After quickly dismantling the Alberta Golden Bears in the semi-finals a day earlier, the Rams faced a bitter rival that they couldn’t shake off in their last three matchups.

But on Saturday night, David took down Goliath in a memorable classic that will be talked about for years to come. 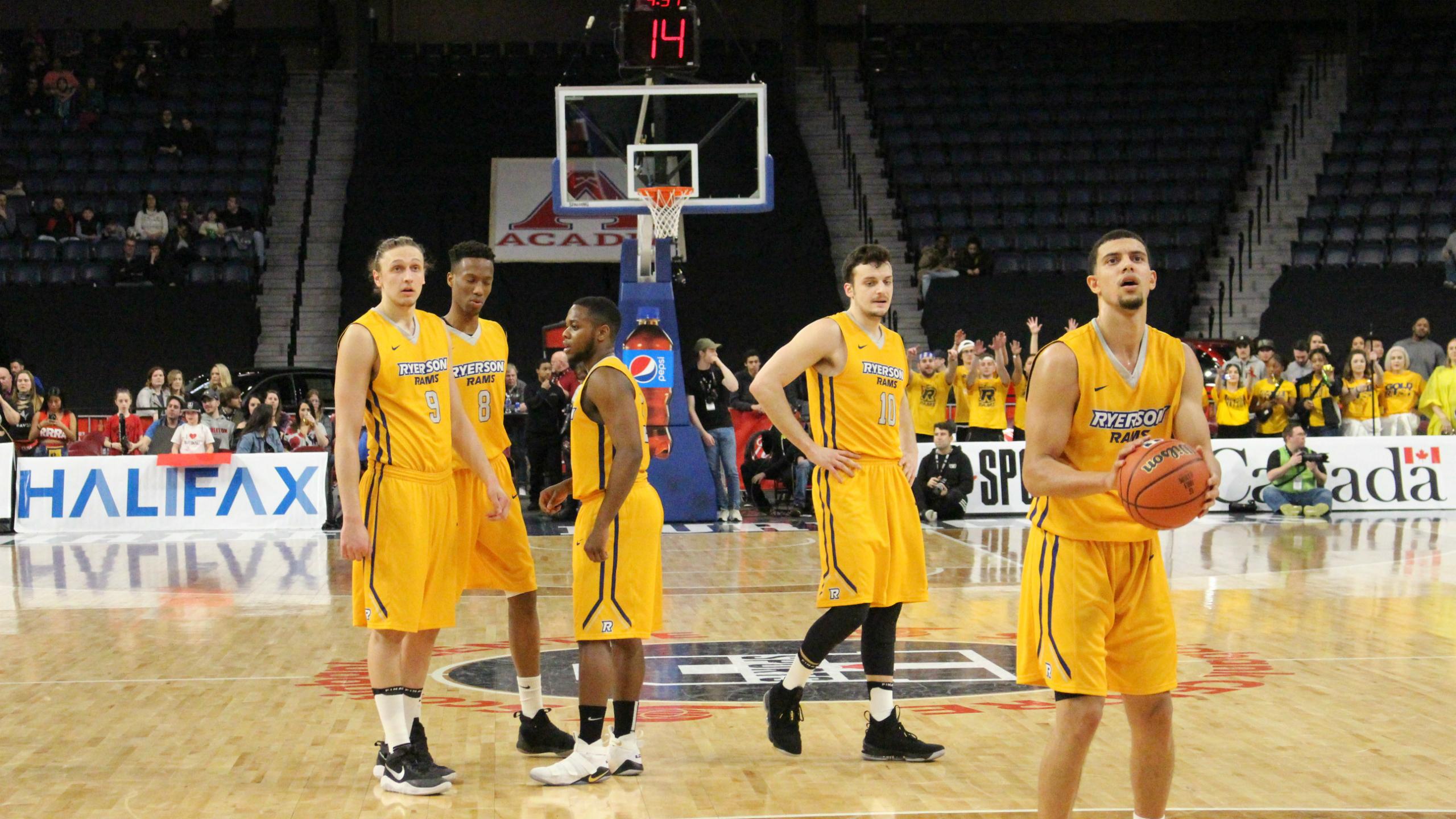 The Rams made 20 of their 23 free throw attempts in the victory (Photo: Peter Ash)

“It’s been an up and down year, but we never stopped believing,” said Rams head coach Roy Rana.

Led by their seniors, Ryerson put it all on the line and did what no team in the country could do for the last seven years: defeat the Carleton Ravens in the national tournament.

Despite leading by as many as 12 early on in the first quarter, the Rams found themselves in a difficult position, as the Ravens would put the pressure on late.

Thankfully for the Rams, a familiar face soon rose to the occasion.

Fifth-year guard Myles Charvis took over, making the biggest play of the game in the dying seconds of the final quarter.

With a dribble drive move to the basket, Charvis converted a layup to put his team up 77-71 with only 43 seconds left.

“It’s that time of the year,” Charvis said. “You gotta have confidence.”

The undefeated Ravens searched desperately for a three ball to keep their championship dreams alive, but the Rams managed to hold on and ice the game with free throws to secure their spot in the gold medal game on Sunday.

After getting crushed by the Ravens in the Wilson Cup championship game only a week earlier, Ryerson knew that matchup didn’t reflect their team whatsoever. And despite the win, Ryerson’s coach still wasn’t ready to take his foot off the gas. 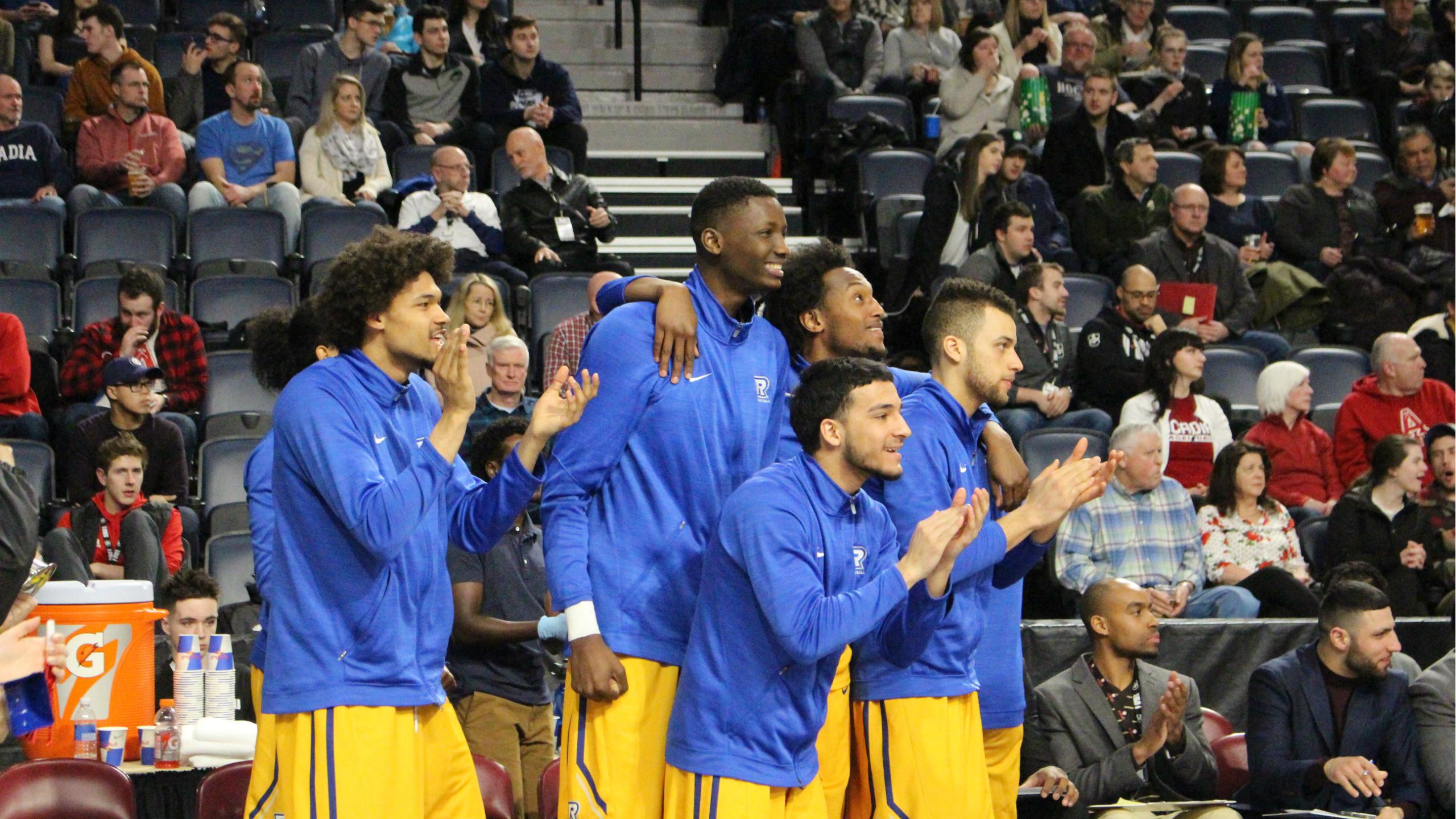 Ryerson had a bit of scare earlier on as star guard Manny Diressa was in apparent pain.

Eventually, he would head to the back with a trainer holding his left shoulder in the early stages of the second quarter.

Diressa would check back in two minutes later, but as the game went on, his shoulder issue would reoccur again late in the fourth.

But once again, he wouldn’t let that hold him down, entering back into the game like nothing happened.

“He can play with one arm,” Rana said post game regarding concerns about Diressa’s shoulder heading into the national championship game. “That’s where we’re at, it’s this time of the year, there’s no resting for the next game. This it, this it for us, this it for this team.”

Along with his 28 points, Diressa added six assists, two rebounds and two steals on 8-13 shooting in 31 minutes of action.

Looking ahead to their national championship game, the Rams have a chance to create a storybook ending to their season as they matchup with the Calgary Dinos, a team they faced during the pre-season and lost to in a close overtime battle.

“It’s gonna be a great game,” Rana said. “We’re gonna have to play well and hopefully these guys can do it because I’ll just be sitting and watching.”

UP NEXT: The Rams will take on the Calgary Dinos in the national final. Tip off is scheduled for 7:00 p.m.