Sick of traditional methods for getting through her period, Annie Arnone tries out THINX, underwear that you free bleed into. But this product might not be all it’s cracked up to be. Oh, and there’s a lot of blood, too

My body shifted in the tiny chair beneath me, as I tried to suppress the uncomfortable feeling I had in my lower belly—something was off. The gnawing pain I had in my back grew stronger as my Grade 7 geography class dragged on, and I began to conjure up an escape plan in my head in the event that I threw up all over my desk. Finally, I excused myself, and ran to the washroom across the hall, crying uncontrollably.

What the hell is going on? I thought.

My legs brushed against each other with each step, until I realized that something wet and warm was coating my thigh beneath my pants. I took refuge inside the bathroom stall, pulled down my damp black jeans and all I saw was red.

I wasn’t dying, though I thought I was, and I definitely wanted to. The puddle of blood in my underwear was simply a sign of what was to come for the rest of my adult life—an introduction to a lot of pain, and a lot more embarrassing bolts to the bathroom. I got my damn period.

I was 12 years old when I got my first period. Being the first person in my friend group to get it, I carried the weight of “womanhood” around on my shoulders every day, and every month I dreaded the moment I’d have to carefully unpack a pad in secret, trying my best to mute the sounds of the wrapper in my elementary school bathroom.

Through my years of adulthood, I slowly migrated towards tampons, and other methods of “comfortable bloodletting,” let’s call it. But despite these efforts, I felt my wallet grow thinner, and the older I got, the less OK I felt spending money on these products. So this year, I did some research.

A 2014 survey done by Canadian Menstruators shows that approximately 17.8 million Canadian women between the ages of 12 and 49 get a period. Let’s say a box of tampons cost $10, and each of those people are buying one box per month. This means that in one month, there will have been $178 million spent on tampons alone.

Considering most people do not ask for their menstruation cycle—I sure as hell didn’t— these numbers are pretty staggering.

Not to mention the fact that these products used to be taxed. In 2015, after years of fighting the tax on tampons, the Federal government lifted the goods and services tax and harmonized sales tax on feminine hygiene products. In Ryerson’s women’s bathrooms, there are dispensers for tampons and pads costing about 25 cents, but most are usually empty. While the question of why we are still required to pay for feminine hygiene products still remains, I tried to make the best out of the lose-lose situation, and find myself a cost effective and safe alternative. 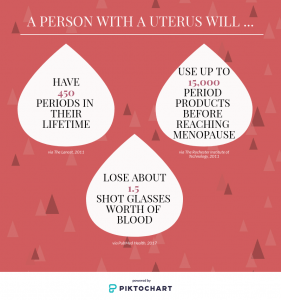 Something that always worried me about tampons was the danger of Toxic shock syndrome (TSS) which has been ingrained in my brain since my mother told me a story of a woman who lost her legs, when I was 12 years old. The condition is caused by high amounts of bacteria in the vagina, typically found as a result of tampons that have been in for too long. TSS can be fatal if left untreated, or in the extreme instance of the woman in my mom’s story, it can result in amputation once the infection spreads. I wanted something to replace my tampon.

So the internet led me to THINX—an underwear brand for women that allows them to practice “free bleeding” in a padded pair of what seemed to be regular looking underwear. The idea of plugging up the floodgates of hell with a cotton cylinder every month never felt natural to me, so this seemed like the perfect compromise.

Shuddering at the thought of my mother’s cautionary tales, I purchased two pairs, and anxiously awaited my package in the mail. Both panties came out to be $77 together, which I thought was pretty reasonable compared to what I usually spend.

On average, I go through a large box of Tampax Pearl tampons in five days while on my period, which retails at around $11 per box. A box of tampons contains about 18, which is the average number someone needs when on their cycle. That’s around $132 a year spent on your period. A 2000 report from medical journal The Lancet found that someone with a uterus will have around 450 periods in their lifetime, which is about 37.5 years of menstruation. If tampons cost me $132 a year and I have 37.5 years of tampon-buying, I will have spent $4,950 on tampons in my life. That’s a pretty hefty cost for doing nothing except being born with a uterus.

As I scrolled through online reviews for THINX, I got the impression that the two pairs that I bought for roughly $40 each would be able to last me years—which is a big win, in my opinion. The underwear could not have arrived on a more perfect day. My period had just begun and the hellish damp feeling returned. It’s almost as though I forgot how bad my periods can be when I go a month between cycles. I put on my first pair of black underwear and began my one week trial.

CYLINDER EVERY MONTH NEVER FELT NATURAL TO ME”

The bottoms hugged my body perfectly. I kicked my legs around like a monkey and danced across my apartment as I tried to acclimatize myself with the new undergarment. The material resembled that of a bathing suit—kind of stretchy and oddly water resistant—which made sense because I was about to give those bad boys a run for their blood-soaking money.

My box of tampons stared into my soul as I pulled the darkest pair of pants I owned onto each leg, and began my day. This was done in the event that I should leak—black pants work like magic when I need to cover up spotting.

Day one went swimmingly. The underwear withstood my inevitable I’m-late-to-class sprint and my four-hour office chair sit, beautifully—at this point, I was on top of the moon. Why hadn’t I heard about this wonder-wear before?

My one criticism right off the bat was the fact that I felt a little wet down there throughout the day. I often don’t notice that I’m on my period when I wear a tampon because I can’t feel the absorption. The THINX undies are an external option, though, so I did anticipate a little bit of dampness. It was a similar feeling to that of a pad, but with a better fit.

Within THINX’s fine print, it does state that this product should simply be used as a backup to typical methods of feminine hygiene products. “No leaks!…The underwear holds just half a regular tampon’s worth of blood, so it’s great for spotting (or, as always, back up to tampons and menstrual cups)” it reads.

I wore my first pair for the entirety of the day—about eight hours or so. Unlike a maxi pad, you don’t have to change every few hours, which worked great with my busy schedule. The thought of sitting in my own blood all day was still a little strange, but again, I loved how low maintenance it was.

It wasn’t until I went to bed, though, when things got bad. The lead-in to day two, once I’d switched pairs for the evening, is when I realized the black cotton period panty was no match for my flow. I leaked, and I leaked a lot.

I woke up in a pool of my own blood, panicking as if this sort of blunder had not happened to me in my 10 plus years of perioding. Warm, red liquid coated my thighs, and my perfectly new beige bed sheets seemed as if they were mocking me. My bed had turned into the elevator scene of The Shining and I wasn’t happy about it.

I’ve teetered into heavy-flow territory for my more recent periods, so my quick bed sheet swap was not a new process for me—it just sucked that this so-called protective product didn’t help me out more.

I almost never wear a tampon to bed, for fear of TSS (I like to sleep in late) and often opt for a pad, which also means I’m used to the occasional night-time leak.

But despite my murder scene of a bedroom, I persisted in the name of journalism.

“THE THOUGHT OF SITTING IN MY OWN BLOOD

ALL DAY WAS STILL A LITTLE STRANGE”

I grabbed hold of the so-called leak-free undies, and held them under running water as I watched the blood from the night before fill my sink. As the water slowly turned translucent again, I threw them in the dryer and prepared for my day. THINX actually directs its customers to toss the underwear into a regular load of laundry, but I wanted to preserve the garments with the utmost care—and I wasn’t doing laundry everyday.

My proactive demeanor slowly shifted to reluctance when I realized I had a date that evening, but no matter. I had too strong of a desire to see these panties solve the money problem I’d been facing with my period for far too long. I walked around downtown Toronto with my newly dried pair of THINX, tapping my bottom between every stride to make sure that I hadn’t leaked again.

The lack of waste I produced was also a huge bonus for me. I practice an obnoxiously vegan lifestyle and try my best to reduce the amount of garbage I use, so not having to rifle through tampon after tampon was nice for a change.

Eventually, I met the gentleman I’d planned a date with, and while I should have been gazing into his dreamy blue eyes, I was gazing down, between my legs instead, wondering when the floodgates holding back what seemed like litres of menstrual blood would release.

The date was cut short, on my accord as I felt the droplets of blood run down my legs, and low and behold when I got home, I had leaked again.

Days three to five actually worked out quite well for me. I’d gotten into a rhythm of washing and drying before bed, alternating between the two pairs on a tight-knit cycle. The less heavy the flow, the more my underwear could handle my period.

Considering the fact that my first couple of days on my period are nowhere near the “spotting” they speak of on their website, I wouldn’t recommend wearing the underwear during a heavier flow. Despite the horrific encounters I had with bloody bed sheets and dates cut short, I loved THINX. I liked the idea of wearing something comfortable, and natural instead of plugging myself up like a drain—it just makes sense. It saves me money, waste and the fear of TSS, but it still isn’t the ideal solution. It was a nice change from my usual products, and I hope to soon see a wider variety. Despite the stigma around periods, maybe the hype around products like this will lay the groundwork for more advancements in the future.

Since my one week-trial, I’ve actually hidden my tampons in my closet. Free bleeding is kind of a beautiful thing, in my opinion. I’ve hated my period for as long as I can remember, but the idea of letting it happen and not fighting it was liberating. It’s not menstruation that’s the problem, it’s the lengths we go to suppress it.