The creation of the plaque came as one of the recommendations of a Ryerson community consultation of the Truth and Reconciliation Commission (TRC). After the TRC delivered its final report in 2015, Ryerson launched a community-wide consultation in November of the same year. The summary report titled Truth and Reconciliation at Ryerson: Building a Foundation for Generations to Come was released on Jan. 26.

The plaque outlines Egerton Ryerson’s involvement in the design and implementation of the Indigenous residential school system, and the atrocities that were committed to children in those schools.

“The aim of the residential school system was cultural genocide,” reads the plaque, now located beside the statue of Egerton Ryerson across from Bond St. 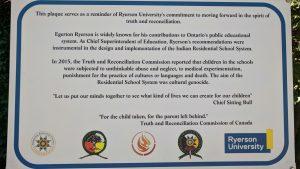 The ceremony, which was emceed by Cyndy Baskin, chair of the Aboriginal Education Council, included Indigenous speakers and students who played instrumental roles in the project’s creation.

Ryerson Elder Joanne Dallaire opened the ceremony with a song that is traditionally sung facing the East. “[The song] is a reminder that the sun is coming up that day, that yesterday is gone, all we can do is learn from it … from where we stand now, our tomorrow looks very bright because of this plaque,” she said.

“Today’s ceremony does not mark a beginning or an end, but a step towards a long process of reconciliation,” said Lachemi, thanking the efforts of the community and students’ activism for the project.

To the thousands of Indigenous youth, the plaque represents a marker in the pledge Ryerson has made to truth and reconciliation, Lachemi said.

After Lachemi, O’Neil Green took the podium to thank the community and especially Indigenous students for their courage to speak out during difficult times.

“We cannot have reconciliation if we’re not aware of the truth. Truth telling is very essential to this process. And this plaque brings about the truth about how Indigenous people have been treated in residential schools,” said O’Neil Green.

The plaque is a reminder of our story and our place in history and evidence of our commitment, she continued, and signals a small step forward in sharing the truth.

Dennis, who is also a third-year social work student then spoke about her upbringing as an Indigenous child and the obstacles she has had to get through, noting the importance of addressing trauma to heal but recognizing that Indigenous culture is not centred in trauma.

“Every time I walk by this statue it tastes like the icing on the colonial birthday cake knowing the role this idolized man played in the lives and deaths of all my relations,” said Dennis.

“I still dream we can all speak Indigenous languages one day and that settlers remain heartfelt and genuine in their efforts for our future generations to come.”

Dallaire then proceeded to give closing remarks and prayers. She narrated how her grandmother, great grandmother and aunt were all medicine women who often healed settlers who came to them injured.

“One of the things about our people is that we’re really good at forgiveness,” continued Dallaire, saying she was taught that people act on what they know. “We all know better now… I challenge you to talk to somebody who doesn’t know about this and inform them,” she said.