The sudden closure of the pedestrian street central to Ryerson’s campus is putting students and staff with disabilities at risk, advocates say.

Without much warning, city crews installed yellow fences to block off Gould Street for water main upgrades last week. Construction between Yonge and Mutual streets is expected to continue until early December.

“As someone who is disabled myself and who is a part-time mobility [device] user myself, the barrier is one that is incredibly serious,” said Arielle Sugarman, a student enrolled in the School of Disability Studies at Ryerson and former lead of RyeACCESS, an advocacy and outreach group for students with disabilities.

A narrow, fenced-off sidewalk packed with students shuffling to class leaves those with disabilities “in the most danger of being injured, being left behind and not really having room to manoeuver,” Sugarman said.

The Quad is also under construction as crews fix drainage issues in the Recreation and Athletics Centre and improve accessibility with new ramps and doors around the Quad.

Located in the Sally Horsfall Eaton Centre, Ryerson’s School of Disability Studies is on the edge of campus—and as far as it gets from the subway, said Loree Erickson, a fellow in the department who uses a power wheelchair. Naturally, Gould Street is how Erickson said she got there during the first week of her fellowship.

“I like the road because it’s smoother and there’s more room,” she said. 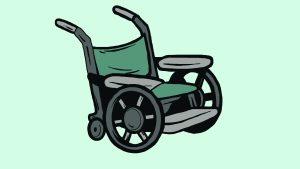 Now that the option no longer exists, Erickson said she’s been finding longer, alternate routes or using the crowded sidewalks. It’s lucky her wheelchair is powerful enough to traverse the newly-installed asphalt ramps, many of which have tire marks and dents in them. Warped temporary ramps are yet another barrier for students with manual wheelchairs on campus, she said.

On Monday morning, Erickson said she was trying to mount the curb at the intersection of Church and Gould streets. After crossing the street, she said she couldn’t get on the sidewalk right away because the corner was so crowded. No one noticed or moved for her. It felt unsafe, Erickson said, since she was stuck on the busy street.

“We should be looking out for each other, whether people have disabilities or not—because you can’t always tell if somebody’s disabled just by looking at them,” she said.

Erickson said being patient with others navigating campus will especially be important when it starts to snow, making pathways even more narrower.

Ram Ganesh, president of the Ryerson Students’ Union (RSU), was aware of the construction project. Ganesh said the RSU asked the university to arrange to delay construction after orientation week.

Since Gould Street is public property, the city is in charge of its maintenance. Construction signs went up with the fences last week.

In a statement, the city said construction was originally scheduled for 2019 but Ryerson contacted them to move up their timeline since the university is working on a Gould Street beautification project next year.

Both the city and the university have been posting updates online, but there was no formal notice issued to students beforehand. When asked why the university didn’t warn students about the upcoming closure, spokesperson Dasha Pasiy said some announcements were made via newsletters and social media posts over the summer, when the city project was slated to start.

“It’s one barrier after another. That’s kind of what it’s like on this campus: a lot of the classrooms aren’t accessible, a lot of the buildings aren’t and now Gould Street isn’t,” Sugarman said. “That is what the disabling effect is. We are able to move around in this world when there aren’t these literal barriers.”

Both Sugarman and current RyeACCESS co-lead Mohammed Malek said if there had been notice and communication about the construction work, Ryerson community members with special needs could’ve better prepared.

“This came up out of nowhere,” said Malek, a second-year nursing student, who added that RyeACCESS is now scrambling to provide notices and create maps with alternate routes for students.

They plan on printing hard copies and posting digital copies on social media, but are still trying to figure out the best way to inform individuals who are blind, he said.

Malek said he also wants to lobby faculties to ask instructors to let their students leave class early so those with disabilities can get to their next class on time if construction forces delays or time-consuming detours.

To Heather Willis, Ryerson’s accessibility coordinator, the solution is showing students with disabilities the indoor route that allows them to navigate campus in all seasons.

Willis said she’s leading a tour, which will show students how to get from the Student Learning Centre to the Rogers Communication Centre indoors, on Sept. 20. Students can also book individual tours with her.