Among the collection of Ailish Forfar’s prized possessions, there’s one that stands out above the rest: her day planner.

In addition to the full course load that comes with being a third-year Sport Media student, the former Rams winger recently signed her first professional hockey contract with the Canadian Women’s Hockey League’s (CWHL) Markham Thunder. Add on her job as an assistant coach for the Rams women’s hockey team and a lead organizer for the Ryerson Athletics humanitarian trip, and it’s clear that she’s living a pretty busy life.

When the Rams women’s hockey team saw their season end last February, Forfar figured she had seen the end of her playing career, using up her five years of eligibility between the National Collegiate Athletic Association (NCAA) Dartmouth University and the Rams.

That was, until a phone call came from Laurentian Voyageurs head coach Stacey Colarossi in early July. Colarossi was the coach tasked with assembling the U SPORTS all-star team to participate in Hockey Canada’s Summer Showcase in Calgary. Forfar quickly accepted, and after not being on the ice for nearly four months, scrambled to get in shape.

“I had about five weeks to train … and while I was doing that I realized how much I had missed hockey,” she explained. “I went to the showcase and I had a great time. I thought I played well, I was definitely behind some of the players who had been training all summer, but the feelings [of excitement] came back.”

Forfar decided to enter her name into the CWHL draft just days before boarding the plane to Calgary. It just so happened there were CWHL scouts watching her play for the U SPORTS squad and shortly after returning to Ontario, various general managers reached out to her.

On August 21, the Markham Thunder announced they had signed Forfar as their second and final pre-draft signee. “I think we aligned a lot … and I think they saw me as more than just a player.”

Community is something Forfar cherishes dearly. Upon her arrival to Ryerson as a 22-year-old freshman, she found herself searching for a place to fit in away from the rink. It turned out that the humanitarian trip was exactly what she was looking for. “The more I got involved, the more time I spent, the more committed I got, I really realized it was something I wanted to have a hand in.”

Despite knowing that taking on all of these tasks could drain her, Forfar says that it’s all about having no regrets. “I’d say at times, I’m gonna feel a little bit overwhelmed, but I think when I look at all my responsibilities and I prioritize my day to day, I know that I’m doing all the things I want to be doing with my life right now.”

She was recognized for her efforts last year, receiving the Ontario Hockey League (OUA) and U SPORTS Marion Hilliard Award for her academic, athletic and community efforts. She was also honoured with the G.L. Dobson Award from Ryerson for her contribution to the community.

Within the women’s hockey community, her desire to give back is just as strong. It’s also what inspired her to help coach the team she once played for. She’ll be on the bench this season for the Rams as much as her schedule permits, something head coach Lisa Haley is thrilled to have. 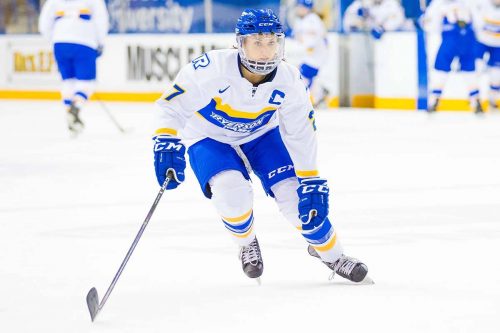 “We both agreed that staying engaged on a daily basis was something we both wanted to happen and I’m really pleased with the way it’s worked out,” said Haley. And while Forfar recently shared the ice with some of the players she now coaches, Haley thinks her leadership is what allows Forfar to make the transition seem easy.

“There was no pro women’s hockey growing up,” said Forfar. “I only thought about the Olympics, it was almost like if you didn’t make the Olympic team were you really a good women’s hockey player?” She recognizes the opportunity to be a visible role model for girls in the hockey community, and feels it’s a duty to give back in any way she can.

A student, coach, humanitarian and now, professional in her craft, Forfar is grateful to have realized her dream, and now she wants to help others realize theirs.

“I think if you’re not doing everything you can do to help the people around you and yourself, you’re missing valuable opportunities [that] you’ll look back on one day and possibly regret.”