By Raneem Alozzi and Maggie Macintosh

A dozen socialist club students chanted outside a Ryerson University Senate meeting on Oct. 2, in protest of the university updating its statement on free speech to appease Premier Doug Ford.

“Hey, hey, ho, ho; the protest law has got to go!” members of Social Fightback Club shouted as the Senate met in the Podium building to discuss the university’s draft statement on free expression. Student activists also handed out pamphlets that state Ford’s “Orwellian directive” aims to crack down on student protests. 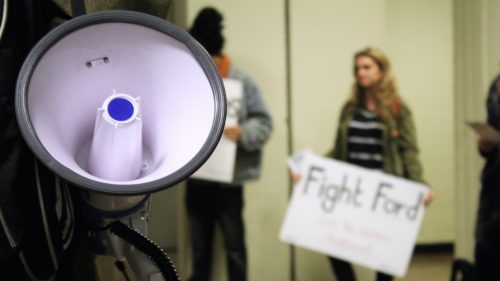 Any post-secondary institution that fails to create a policy that meets the minimum standard laid out by the government by Jan. 1, 2019 could face operational funding cuts.

By chance, Ryerson was finalizing a new statement on freedom of expression when the announcement was made. A motion to rework the university’s current statement from 2010 was brought to the Senate on June 5, 2017.

The latest draft states that while the Ryerson community will sometimes be divided on issues, it is not the university’s role to censor speech. If passed, community members will be allowed to contest ideas they disagree with—but “may not obstruct or otherwise interfere with the freedom of others to express views they reject or even loathe.”

The protestors took issue with the language in the draft, citing it as dangerously open to interpretation and “anti-protest.”

The group of Socialist Fightback members sat in on the Senate meeting to give feedback on the draft. The wording around interference and obstruction is left open to interpretation “to the detriment of student activists and to the benefit of those who may wish to espouse hateful ideas on our campus,” said Olive Pape, a member of Ryerson Fightback, speaking on behalf of the group.

Pape said there has never been a protest that didn’t disrupt or obstruct, and when it comes to defending the rights of the oppressed, such tactics are necessary.

The student activist said she and other group members have previously blocked the graphic anti-abortion images and protestors who appear on campus. “Under this policy, could I face disciplinary punishment for standing up for women and others against bigots?” Pape asked the Senate.

The president of Socialist Fightback at Ryerson, Hermes Azam, got up to the microphone to say a few words as well. “When fascist agitators and religious fundamentalists show up on our campus, students have every single right, and even should be encouraged, to show their opposition against these ideas,” he said. No clubs should be defunded nor students penalized for standing up to bigots, Azam added.

But students weren’t the only ones unhappy with the first draft. Ryerson professors also voiced their concerns and asked the Senate committee to reconsider their current draft. Lila Pine, an Indigenous new media professor and researcher, reminded senators that an Ezra Levant talk was permitted last year despite the Senate’s knowledge of Levant threatening an Indigenous faculty member before the talk.

At the time, the Senate did not take a stance citing that, “No bones were broken,” she said.

“I think one of the things we want to remind Senate members of is that harm is also inciting hate against other groups,” Pine added.

Pine urged the committee to make a strong statement opposing Ford’s attack on education, which includes his facilitation of white supremacists like Faith Goldy under the veil of freedom of speech.

Alison Kemper, an associate business professor at Ryerson, echoed Pine’s sentiments into the mic. Kemper said she was apprehensive that Ryerson is in risk of having the government control the limits of speech on campus.

Because of Ryerson’s history with far-right groups organizing events on campus, Kemper said the government will be watching us more closely to ensure that we are “welcoming” their voices, a situation that Ryerson cannot continue to be relaxed about.

It wouldn’t be a first if Ford suppressed free speech on campuses, said Marco La Grotta, a Ryerson grad and organizer with Fightback who sat in on the meeting.

La Grotta noted that last month, Ford cut down the number of Toronto city councillors by half by overruling the charter mandating freedom of expression.

“This government is breaking new grounds,” he said. “And if you can suspend the freedom of expression then he can sure as hell do the same to us. And we’re not going to wait to find out.”

After listening to the public’s concerns, Mohamed Lachemi, university president and chair of the Senate, said any Ryerson community members can email feedback about the draft to freedomofexpression@ryerson.ca.

The Senate will vote to update Ryerson’s statement on free speech next month on Nov. 6.