This dog is more famous than you will ever be. Photo courtesy: Emma Lewis
Reading Time: 3 minutes

Fourth-year fashion communications student Emma Lewis always wanted to be on TV. In her final year, Lewis has been interning at CTV’s The Social as a step to getting there.

But Lewis isn’t the first in her family to get her hands in the entertainment industry—her dog Charlie, a one-year-old English Golden Retriever, is a movie star.

Charlie starred in Hallmark’s A Veteran’s Christmas, where he plays a dog named Christmas. The movie is about a veteran who returns from Afghanistan, only to find herself stuck in a small town during the festive season, where she finds love (it’s a Hallmark movie, so of course). Charlie plays the role of her service dog in Afghanistan, who the main character was forced to leave behind.

The one-year-old rising star was cast in the role when his trainer and wrangler, Sherri Davis, told the family about the movie opportunity. Charlie was in demand because he was a Golden Retriever, the only one his trainer knew because she stopped breeding them.

Lewis said Charlie is her family’s third dog, an English Golden Retriever (which is why that coat is snow white and not brown). Showbiz isn’t a far cry for the pup—his parents were also show dogs.

“I think that’s why he was also considered for the movie, I guess he has that show dog face.”

This also isn’t the first time Charlie’s adorable face has caught mass attention. When he was younger, Lewis posted Instagram photos of him frequently, including one of him with some Glossier merchandise. The company reposted the photo on their own account, where Charlie garnered over 60,000 likes, Lewis said.

Lewis and her parents agreed to let Charlie do the movie, which was difficult since it meant he had to move to Huntsville, Ont., far from his family, for a week of shooting.

Charlie’s not letting the fame get to his head though, but mostly because he doesn’t recognize that he’s a star

“We were kind of heartbroken for a little while,” said Lewis. “At first it was like ‘a week away—well, that’s not bad’. It goes by really slowly.”

Lewis said besides going down to visit Charlie on set, her parents asked for updates every day. They were glad to find out their boy received the full star treatment. While on set, Charlie had his own “dressing” room, with a star denoting the door (in case anyone forgot who the talent was).

Along with the sweet digs, Charlie also received constant attention from the cast and crew around him.

She said he might have not even realized he was there to do a job.

“He’s just getting a lot of attention and gets to hang out with people all day which is any dog’s dream.”

Lewis said her family wouldn’t have let Charlie go through with the project if he was a shy dog. But Charlie is “high energy” and “loves attention” so it was a perfect fit. 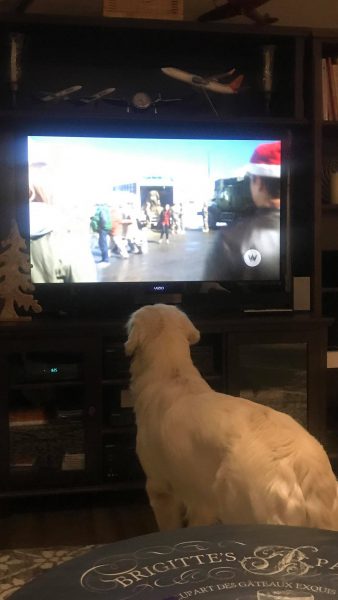 Charlie watching the premiere of his film on the W Network Channel. Photo courtesy: Emma Lewis

Lewis herself has been handling having a movie star dog as something of a joke, but she said he family is incredibly proud of Charlie, who was described as “perfect” on set—not spooked out by the big movie lights and cameras.

When it comes to his future in showbiz, the family hasn’t made any concrete decisions yet. They’re taking a moment to enjoy his newfound fame—on the night of Nov. 12, they settled in to watch the W Network channel premiere of the movie. Lewis’ parents pulled out a red blanket and everything.

Charlie’s not letting the fame get to his head though, but mostly because he doesn’t recognize that he’s a star.

“There’s been trailers out and we try and make him watch it, but he never really just fully looked at the screen, so we’re hoping tonight, because it’ll be on the big screen TV that he’ll see it and recognize,” said Lewis, before the premiere. “I’m sure he’ll recognize the other actors, I’m not sure how a dog’s brain works.”

She later told The Eyeopener that during the screening, Charlie perched up in front of the screen when he recognized his other dog co-star.

Lewis said she’ll be posting Charlie on her Instagram. But when it comes to other big movie opportunities, the family will first consider how far Charlie has to go before signing on.