By Sherina Harris and Emma Sandri

For the first time in at least two years, the Ryerson Students’ Union (RSU) held quorum for its entire Semi-Annual General Meeting (SAGM) on Nov. 28.

At least 100 voting members sat in an auditorium in the Rogers Communications Centre throughout the three-hour-long meeting.

At this year’s SAGM, motions were passed to create a sixth RSU executive position, increase the sum set aside for unpaid internship grants and denounce the province’s free speech policy mandate.

Due to past meetings not reaching quorum—the 100 general membership mark required for the meeting to proceed, the meeting began with motions backlogged from previous years. 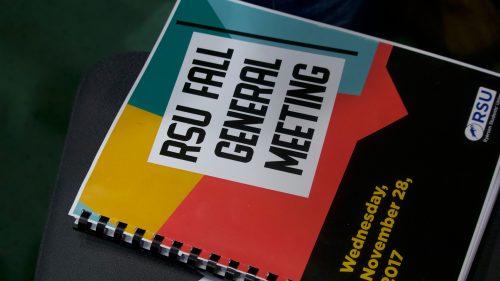 An omnibus motion containing 15 bylaw amendments, some of which are motions that were presented at the Annual General Meeting back in April 2017, failed.

The bill included an amendment to establish a permanent general manager on the RSU—a position the current RSU executives terminated on their first day in office—as an ex-officio non-voting member of the RSU.

This bylaw would have ensured the general manager was one of the two signing officers on any deeds, transfers, licences, contracts and engagements on behalf of the RSU.

The omnibus bill also included a bylaw change to make the Board of Directors (BoD) establish a finance committee, which would include the general manager. It would have required the general manager and financial controller to approve the annual operating budget.

Other amendments included requiring anyone running for the executive be a student during their time in office, if elected and to ban candidates to campaign as slates or endorse other students running for election. 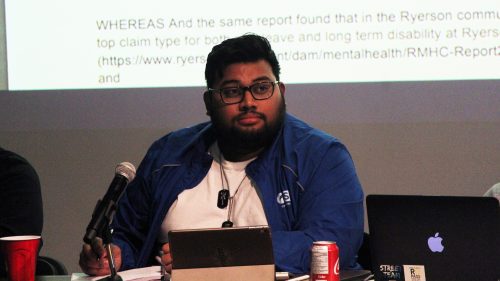 Students will vote for six RSU executives in the next election cycle.

The membership passed an omnibus motion that included adding a vice-president marketing position to the RSU executive team—which currently consists of a president and vice-presidents of operations, equity, education and student life and events—at the SAGM.

RSU president Ram Ganesh, who put forward the motion, said that since coming into office, his team has noticed a need for someone to handle communications.

This omnibus motion also included the creation of an Indigenous student representative on the Board of Directors (BoD). The student will be a non-voting member of the BoD and will also sit on the Equity and Social Justice Committee. The representative will be recommended by Ryerson’s Aboriginal Student Services.

The RSU slashed thousands in funding for the Career Development Grant in their budget this year. However, at the SAGM, the membership voted in favour to increase the sum of grants handed out to students who accept unpaid internships.

A total of $50,000 in unpaid work grants were distributed to students throughout the 2017-18 academic year. This year’s executive team originally cut funding to $15,000. The motion passed at the SAGM brings the amount back to $35,000, which was what last year’s team originally set out to spend on the grants.

The motion will also require the RSU to lobby the university to match the amount the RSU is spending on the Career Development Grant fund.

A motion to require the RSU to conduct a food audit, which will examine the availability of affordable, healthy and culturally-diverse food on campus was passed. The motion will also require the union to create a plan to improve the range of options for students with dietary needs.

“Ryerson is a food desert for any Kosher-observing person,” said Tamar Lyons, a Faculty of Communications and Design director on the BoD. 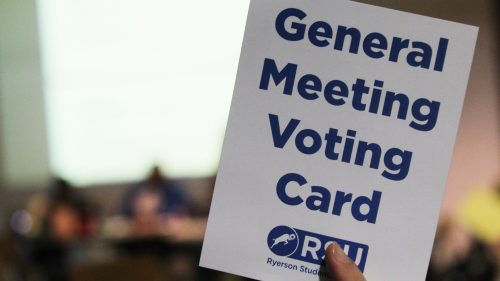 The RSU will lobby the university for a dedicated study day between the end of classes and the start of exams.

The motion, which addressed the mental well being of Ryerson students, passed without discussion. It noted York University and the University of Toronto both have a dedicated day during that time.

Only one of four motions dedicated to the controversial RU-Pass was approved—and even then, just barely.

The membership voted in favour of the RSU providing students with a report detailing how the transit pass will affect students’ OSAP funding—one clause in series of clauses part of the original motion, prior to it being amended during the SAGM.

Students are unable to opt out of the RU-Pass, which will raise tuition by $564 per academic year.

The rest of the motions were deemed out of order. An RU-Pass revote run by the RSU, put forward at the SAGM, would be impossible since the referendum was run by the Board of Governors, said Ganesh.

BoD honoraria won’t not be made public

Ryerson students voted against requiring the RSU to post the honorarium every BoD member receives, along with a rationale for that amount, on their website.

BoD members can be paid up to $1,500 per semester. According to Ganesh, their pay is determined by how many events and BoD meetings they attend.

“It’s not transparent as to how the board honorarium is allocated amongst the board,” said Maklane DeWever, the student groups director on the BoD. “In a lot of ways, this would add accountability.”

Ganesh said some BoD members might not want family or friends to know the specific details of their portfolios, such as working on specific equity projects or “on an RU-Pass platform while all of their friends are GO Transit users.”

A motion to alter the way executives and BoD get raises was also tabled indefinitely. The RSU’s documents currently allow for executives and BoD members to give themselves raises—that’s what happened earlier this year. The motion suggested that only the student body with quorum should be able to decide on changes to executive and board member salaries. This motion could be brought up at any later date.

In an email sent to the BoD and forwarded to The Eye by Ganesh before the SAGM, he wrote he opened an investigation into claims of fraud and embezzlement by the RSU when giving out emergency grants to students. Because of this, Ganesh ruled an SAGM motion to create an audit on the emergency grant system “out of order.”

“While these claims may be baseless, it is our fiduciary responsibility to investigate and hold each other accountable,” Ganesh wrote in the email.

The membership passed a motion to require the student union to publicly denounce the province’s free speech policy.

The motion will also require the RSU demand Ryerson administration refuse to implement any policy restricting the right to protest.

“We need to be very clear, freedom of speech does not equate with freedom from consequences. Violent speech has violent consequences and we have the right to organize protests,” said Olivia Pape, a Socialist Fightback member who put forward the motion. 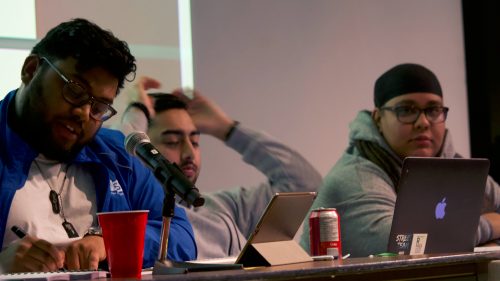 The executive reports accepted at the SAGM address the status of some of the RSU’s key campaign promises, including the $5 menu that was scrapped and their nap pods project. The nap pods still need to be set-up, according to the document.

The reports also mention that the Wellness Centre’s rebranding is underway, with the Good Food Centre currently using the space to store excess donations.